Phil Quade, chief information security officer, Fortinet
“The technology innovation that powers our digital economy creates opportunity for good and bad in cybersecurity. Yet, something we don’t talk about often enough is the opportunity everyone has to limit bad consequences by employing consistent and effective cybersecurity hygiene. Cybercriminals aren’t breaking into systems using new zero day attacks, they are primarily exploiting already discovered vulnerabilities. This means they can spend more of their resources on technical innovations making their exploits difficult to detect. Newer worm-like capabilities spread infections at a rapid pace and can scale more easily across platforms or vectors. Intent-based security approaches that leverage the power of automation and integration are critical to combat this new ‘normal’.”

News Summary:
Fortinet® (NASDAQ: FTNT), the global leader in high-performance cybersecurity solutions, today announced the findings of its latest Global Threat Landscape Report. The research reveals that poor cybersecurity hygiene and risky application usage enables destructive worm-like attacks to take advantage of hot exploits at record speed. Adversaries are spending less time developing ways to break in, and instead are focusing on leveraging automated and intent-based tools to infiltrate with more impact to business continuity. For a detailed view of the findings and some important takeaways for CISOs read our blog. Research highlights are as follows: 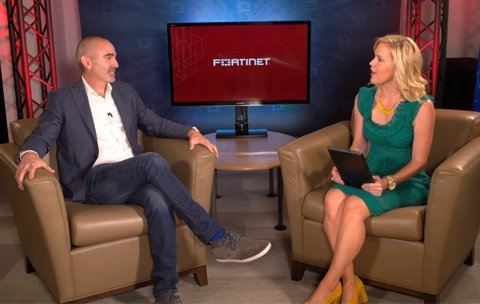 Effective Cyber Hygiene is Critical to Fight Worm-like Attacks
Crime-as-a-Service infrastructure and autonomous attack tools enable adversaries to easily operate on a global scale. Threats like WannaCry were remarkable for how fast they spread and for their ability to target a wide range of industries. Yet, they could have been largely prevented if more organizations practiced consistent cyber hygiene. Unfortunately, adversaries are still seeing a lot of success in using hot exploits for their attacks that have not been patched or updated. To complicate matters more, once a particular threat is automated, attackers are no longer limited to targeting specific industries, therefore, their impact and leverage only increases over time.

Technology Use Foreshadows Threat Risk
Speed and efficiency are business critical in the digital economy, which means that there is zero tolerance for any device or system downtime. As usage and configuration of technology such as applications, networks, and devices evolves, so do the exploit, malware, and botnet tactics of cybercriminals. Cybercriminals are ready and able to exploit weakness or opportunities in these new technologies or services. In particular, business-questionable software usage and the vulnerable IoT devices of hyperconnected networks represent potential risk because they are not being consistently managed, updated, or replaced. In addition, while good for Internet privacy and security, encrypted Web traffic also presents a challenge to many defensive tools that have poor visibility into encrypted communications.

Report Methodology
The Fortinet Global Threat Landscape report is a quarterly view that represents the collective intelligence of FortiGuard Labs drawn from Fortinet’s vast array of network devices and sensors within production environments during Q2 2017.  Research data covers global, regional, industry sector, and organizational perspectives. It also focuses on three central and complementary aspects of the threat landscape: application exploits, malicious software, and botnets. In addition, Fortinet publishes a free, subscription-based Threat Intelligence Brief that reviews the top malware, virus, and web-based threats discovered every week, along with links to that week’s most valuable Fortinet research.

Fortinet (NASDAQ: FTNT) secures the largest enterprise, service provider, and government organizations around the world. Fortinet empowers its customers with intelligent, seamless protection across the expanding attack surface and the power to take on ever-increasing performance requirements of the borderless network - today and into the future. Only the Fortinet Security Fabric architecture can deliver security without compromise to address the most critical security challenges, whether in networked, application, cloud, or mobile environments. Fortinet ranks #1 in the most security appliances shipped worldwide and more than 320,000 customers trust Fortinet to protect their businesses. Learn more at https://www.fortinet.com, the Fortinet Blog, or FortiGuard Labs.

Copyright © 2017 Fortinet, Inc. All rights reserved. The symbols ® and ™ denote respectively federally registered trademarks and unregistered trademarks of Fortinet, Inc., its subsidiaries and affiliates. Fortinet's trademarks include, but are not limited to, the following: Fortinet, FortiGate, FortiGuard, FortiManager, FortiMail, FortiClient, FortiCloud, FortiCare, FortiAnalyzer, FortiReporter, FortiOS, FortiASIC, FortiWiFi, FortiSwitch, FortiVoIP, FortiBIOS, FortiLog, FortiResponse, FortiCarrier, FortiScan, FortiAP, FortiDB, FortiVoice and FortiWeb. Other trademarks belong to their respective owners. Fortinet has not independently verified statements or certifications herein attributed to third parties and Fortinet does not independently endorse such statements. Notwithstanding anything to the contrary herein, nothing herein constitutes a warranty, guarantee, binding specification or other binding commitment by Fortinet, and performance and other specification information herein may be unique to certain environments. This news release contains forward-looking statements that involve uncertainties and assumptions, such as statements regarding technology releases. Changes of circumstances, product release delays, or other risks as stated in our filings with the Securities and Exchange Commission, located at www.sec.gov, may cause results to differ materially from those expressed or implied in this press release. If the uncertainties materialize or the assumptions prove incorrect, results may differ materially from those expressed or implied by such forward-looking statements and assumptions. All statements other than statements of historical fact are statements that could be deemed forward-looking statements. Fortinet assumes no obligation to update any forward-looking statements, and expressly disclaims any obligation to update these forward-looking statements.