Network security refers to the technologies, processes, and policies used to defend any network, network traffic, and network-accessible assets from cyberattacks, unauthorized access, and data loss. Every organization, from small businesses to the largest enterprises and service providers, in every industry requires network security to protect critical assets and infrastructure from a rapidly expanding attack surface.

Network security must protect at the many edges of the network and also inside the network, with a layered approach. Vulnerabilities exist everywhere, from devices and data paths to applications and users. Because organizations encounter so many potential threats, there are also hundreds of network security management tools intended to address individual threats or exploits or assist with other mission-critical infrastructure needs, such as continuous compliance. Organizations should prioritize network security solutions that cover the multitude of threats, using a platform approach that prioritizes integration and automation.

Fortinet’s Security-driven Networking strategy tightly integrates an organization’s network infrastructure and security architecture, enabling the network to scale and change without compromising security operations. This next-generation approach is essential for effectively defending today’s highly dynamic environments – not only by providing consistent enforcement across today’s highly flexible perimeters, but by also weaving security deep into the network itself. 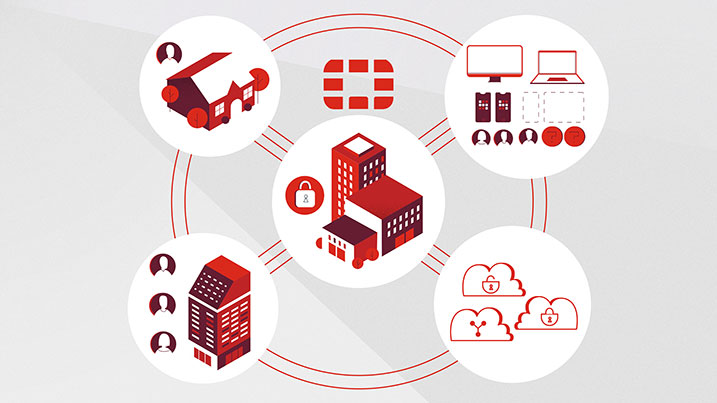 The Importance of Network Security

Today’s threat environment is constantly changing, and from distributed denial-of-service (DDoS) attacks to ransomware, the frequency, volume, and sophistication of cyberattacks show no signs of slowing down. All organizations require network security because even a minor disruption to network infrastructures—such as a minute of downtime, or a lag in service performance—can cause damage to an organization’s reputation, bottom line, or even long-term viability. Catastrophic cyberattacks, which often begin as seemingly benign intrusions that inadequate network security tools failed to catch, can force organizations to pay crippling fines and even close their doors for good.

A very critical component of network security is a next-generation firewall (NGFW). But to truly protect the network, other technologies are required, and effective network security requires a holistic approach that integrates the firewall with other important capabilities. Essentially, to protect an organization’s entire attack surface, a layered approach with managed network security solutions for all areas of the network must work together as an integrated and collaborative security fabric.

Traditional firewalls have been around for decades, and are a standard security product in use by a majority of organizations. But as the threat landscape has evolved, so too has firewall technology. A next-generation firewall (NGFW) moves beyond a traditional firewall’s port/protocol inspection and blocking techniques to add comprehensive application-level inspection, intrusion prevention, and intelligence from sources outside the firewall.

Both traditional firewalls and NGFW employ packet filtering (both static and dynamic) to ensure connections among the network, the internet, and the firewall itself are secure, and both can translate network and port addresses for IP mapping. NGFWs, however, can filter packets based on applications, using whitelisting or signature-based intrusion prevention systems (IPS) to distinguish between applications that are benign (i.e., safe) and applications that are potentially malicious. There are many other differences, but one major advance between traditional firewalls and the latest NGFWs is the ability to block malware from entering a network—a major advantage over cyberattackers that older-generation firewalls cannot deliver.

The vast majority of organizations today have offices, partners, or individual workers based all over the world, and remote work, or telework, is a trend recently accelerated by the global COVID-19 pandemic. But network security products can’t be an afterthought in these distributed locations, sometimes described as branch offices. Branch office network security means keeping internet traffic safe among branches, corporate resources such as headquarters or data center, and remote employees. There is a lot of data in transit among these distributed locations, all the time. The rapid embrace of cloud-based applications, such as G Suite, Office 365, and other popular Software-as-a-Service (SaaS) tools, means a consistent, secure internet connection among users at various locations is vital to keeping an organization productive.

Traditional wide-area network (WAN) technologies such as multiprotocol label switching (MPLS) are now too slow and cumbersome to keep up with the volume and speed of internet connections needed today. That’s why many organizations are turning to advanced network security solutions such as software-defined wide-area networking (SD-WAN) as part of fully realized network security delivered all over the world and across many distributed (branch) locations. Emerging business connectivity frameworks such as secure access service edge (SASE) combine flexible connectivity provided by SD-WAN with a number of different security needs, from Firewall-as-a-Service (FWaaS) to zero-trust access principles.

An intrusion prevention system (IPS) security service identifies suspicious activities and detects or prevents them from attacking computer networks. IPS security technologies monitor for these activities, capture information about them, and report them to network administrators.  IPS will initiate preventative steps such as configuring other network security tools to prevent possible attacks, and adjusting corporate security policies to block employees or guests on the network from engaging in harmful behavior. IPS tools are a critical component of complete network security, and increasingly are being integrated into network firewalls instead of their traditional place as a standalone product in the network security infrastructure.

SSL inspection is a critical component of network security infrastructure. SSL, or secure sockets layer, inspection intercepts and decrypts all traffic transmitted through an HTTPS website, identifying malicious content. Organizations often use SSL certificates on their websites to provide safe connections. SSL, however, also has a downside—SSL encryption is often today used by attackers to hide malware. Network security solutions, therefore, must include SSL inspection support as a core capability.

SD-WAN offers faster connectivity, cost savings, and performance for SaaS applications as well as digital voice and video services. But SD-WAN has its own shortcomings—especially when it comes to security. Accurate detection and intelligence business policies employed with SD-WAN are important to another network security need: application optimization. Application optimization uses several techniques to boost the overall functionality of the network, and do it securely. Bandwidth capacity monitoring, application coding, and addressing network latency are some of the relevant techniques.

Virtual private networks (VPNs) use virtual connections to create a private network, keeping any endpoint connected to the internet safe, and protecting sensitive information from unauthorized viewing or interception. A VPN routes an endpoint device’s connection through a private server so that when data reaches the internet, it’s not viewable as coming from the device. High-performance crypto VPNs accelerate cloud on-ramp, deliver a better and more secure experience for remote workers, and allow all organizations to maintain a consistent security policy and appropriate access control, regardless of location, for all corporate users, applications, and devices.

Perimeter security is evolving, like every other aspect of network security in the modern age. Traditionally, the network perimeter refers to edge infrastructure that sits between the corporate network and the public internet, creating safe controls for inbound and outbound information passing among them. NGFWs are a typical part of this edge infrastructure. Robust perimeter security must include capabilities such as application awareness and control, monitoring and blocking malicious content, and overall traffic management.

Organizations are utilizing more data, transmitted at faster speeds among globally distributed sites, than ever before. The advent of technologies such as 5G and the needs of organizations transmitting massive datasets, such as those found in high-velocity e-retail, transportation, energy, and manufacturing, have created the need for hyperscale security. All of these developments require proper security controls.

Learn More About Engineering for Hyperscale

Network automation uses network and security software tools to maximize the efficiency and functionality of the network. Automation is employed in many aspects of a corporate IT infrastructure to alleviate human teams and significantly reduce the possibilities of human error, which continues to be a leading cause of network security issues and outages. Employing network automation to update configurations and perform countless other functions in place of cumbersome, manual processes helps reduce the overall complexity of network management and deliver stronger network security as a result.

Learn More About Automating Your Security

Compliance management isn’t optional in this age of data privacy regulations and other compliance controls put in place by various industries, governments, and regions. Compliance management is also traditionally quite cumbersome, involving long, team-led manual processes and weeks and months of work to obtain, analyze, and report on data.

Network and security teams can overcome complicated and exhausting audit processes—which are often ineffective anyway—by automating compliance tracking and reporting and integrating those techniques with other network security operations. Robust tracking and compliance monitoring tools can also evaluate network environments against industry benchmarks and best practices, ensuring that measurement of compliance risks is a simple process.

Learn How to Automate Compliance

“How can we do this even faster?” is a question that’s been around since the dawn of digital innovation, and pertains to network security then, now, and in the future. Speed is the driving force behind digital transformation and how it transforms business, enabling efficiency, access, application development, productivity, revenue, and return on investment (ROI). That’s why high performance is a critical attribute of network security tools—especially in the era of hyperscale and hyperconnected environments, where traditional network security systems will no longer be able to keep pace, no longer be able to deliver secure connectivity, and no longer be able to satisfy user experience demands. Security performance is the gold standard for organizations operating at the cutting edge of digital innovation; even a millisecond slowdown can have enormous negative consequences at this scale.

Sophisticated, targeted attacks represent a big challenge to securing networks. The right network security solutions will be able to pull in up-to-date threat intelligence to safeguard against exploits, vulnerabilities, zero-days, and both known and previously unknown attacks.

Visibility is one of the single biggest challenges in network security; you can’t control and manage what you can’t see. And as digital infrastructure becomes more distributed and organizations embrace combinations of on-premises and cloud-based infrastructure, there is much more potential for network security blind spots. Choose a solution that can promise the best possible visibility and control of the network environment.

Network complexity isn’t just a challenge to manage, it’s also a security risk. Complex networks have more entryways and more opportunities to be affected—the entire attack surface expands thanks to distributed infrastructure and macro-trends such as bring your own device (BYOD) and Internet of Things (IoT) that create many millions of more connections to business networks every year. Businesses should insist on centralized network management, using a single-pane-of-glass management console, even for highly distributed environments with many different tools employed. Simplicity—in infrastructure, in tools, in management—makes for a safer, more secure network overall.

Take a look at the product demos to explore key features and capabilities, as well as our intuitive user interfaces.

Complete the form to have a Fortinet sales expert contact you to discuss your business needs and product requirements.