The hospitality industry comprises a significant portion of global GDP, making it a prime target for attackers. It thus is no surprise that hospitality organizations face unique challenges in the protection of their networks and sensitive data. As organizations increasingly deploy internet-connected devices and services to improve guest experiences, the complexity of protecting the network against cyber threats grows. Loss or degradation of service on the company website, guest wireless network, or other services could result in poor reviews or lost bookings.

Hospitality organizations are also required to be compliant with the Payment Card Industry Data Security Standard (PCI DSS). Unlike retail providers, who require access to payment card data for only a moment to verify a sale, hospitality organizations must store and protect guests’ information from the time a reservation is made through the end of their visit, which can be weeks or months.

See how the Fortinet Security Fabric protects hotels and hotel chains with a comprehensive set of network security technologies that work in concert to enable digital transformation.

Hospitality organizations must balance finite security budgets and thin profit margins against risk tolerance. Optimizing IT and cybersecurity costs is necessary to secure the enterprise with limited cybersecurity staff.

Virtual concierge services, social Wi-Fi, on-demand TV services, and add-on services differentiate hotels but also expand the attack surface. Customers’ impressions of the property diminish when a particular service is down due to a security event or when network performance is degraded.

Hotels often retain their customers’ payment card information for a much longer period than retailers, as hotel rooms are often booked months in advance and charged at the end of the stay. Organizations must be able to demonstrate compliance with PCI DSS, the EU’s General Data Protection Regulation (GDPR), the California Consumer Privacy Act (CCPA), and other data privacy mandates with regard to the data they store.

Achieving centralized and visibility and control of security operations throughout the headquarters network.

Learn More Meeting the individual security needs of different hospitality locations with zero-touch provisioning to allow configuration and control without on-site IT personnel.

Learn More Delivering reliable and high-speed networking to branch locations while ensuring end-to-end security from the Internet to the switching infrastructure. 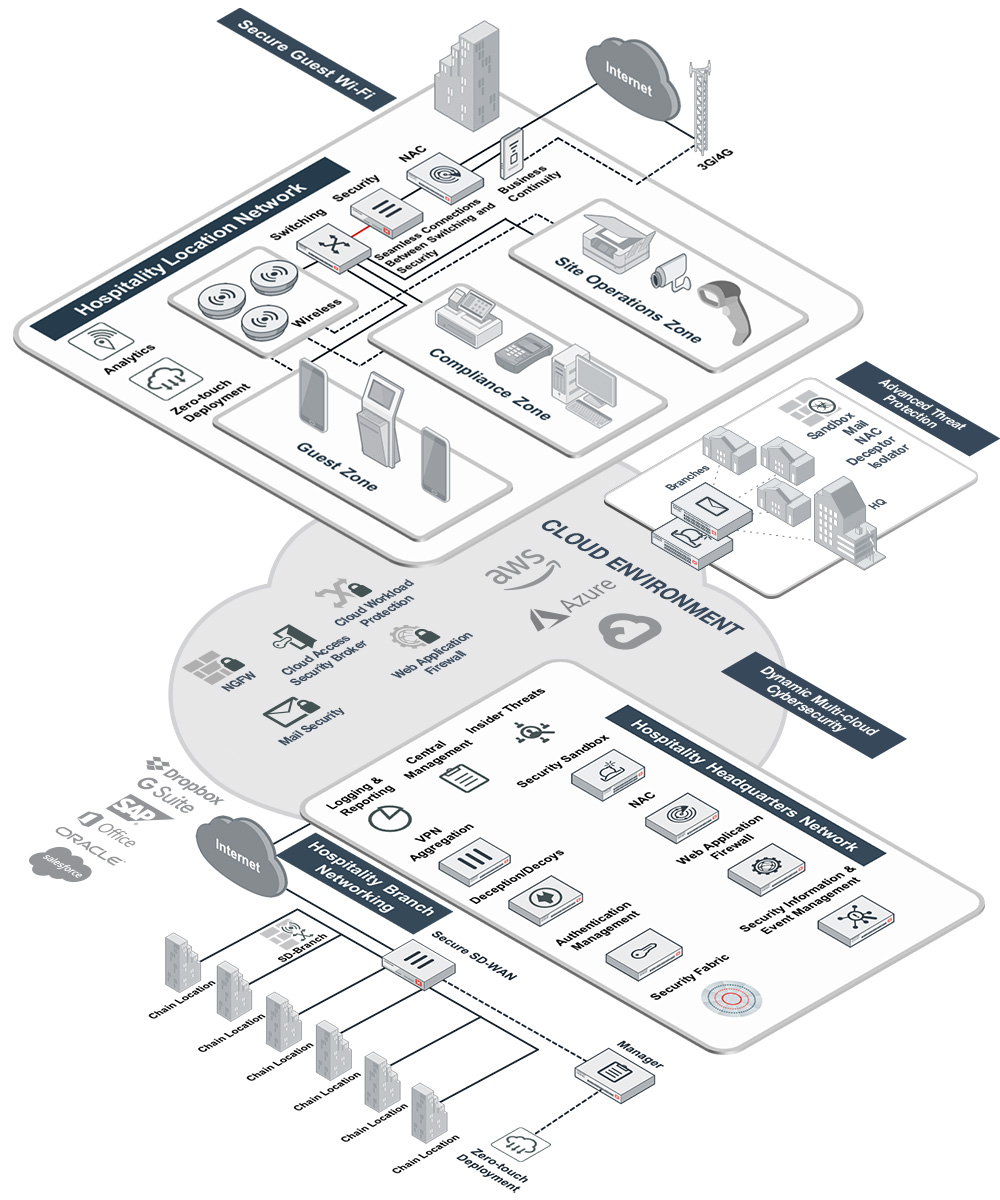 The Fortinet Security Fabric provides built-in connectors for a large list of third-party security solutions and supports other devices via an open application programming interface (API) ecosystem. This allows Fortinet to provide an end-to-end integrated security architecture with single-pane-of-glass visibility and configuration management. This helps hospitality organizations to integrate their Internet-of-Things (IoT) security investments across their headquarters and all of their branch locations.

Fortinet solutions provide built-in support for internal network segmentation. This protects sensitive data from unauthorized use by those already on the network. Segmentation rules can be defined in terms of business and regulatory requirements, helping hospitality organizations achieve compliance with the PCI DDS and other applicable data protection regulations.

Many of the services that contribute to a positive customer experience, including building control systems and entertainment options, are administered directly from the organization’s headquarters. This is in addition to typical back-office functions of a large organization and management of payment card and reservation information.

During the booking process, guest payment card information is stored in the hospitality organization’s reservations database. This information is retained from the time of booking until the end of the guest’s stay, which can be months in some cases. This gives cyber criminals a long window to exploit network vulnerabilities and steal sensitive information from what is often a relatively affluent customer base. The threat to hospitality providers is not limited to data theft, however. Ransomware and distributed denial-of-service (DDoS) attacks can cause downtime for hospitality applications, resulting in missed bookings and poor reviews.

Digital innovation drives many hospitality organizations to extend their networks from the corporate data center across multiple public and private clouds. To protect the growing multi-cloud network, they need a comprehensive, integrated security solution. Solutions such as FortiWeb and FortiNAC can secure the organization’s web presence and automatically identify Internet-of-Things (IoT) devices connecting to the network, while FortiAuthenticator simplifies identity management. FortiManager, FortiSIEM, and FortiAnalyzer provide centralized visibility and control to assist the NOC and SOC teams with identification and resolution of network and security events as well as built-in compliance reporting.

Fortinet solutions include several key features that ease the burden of securing networks that span multiple clouds, such as: 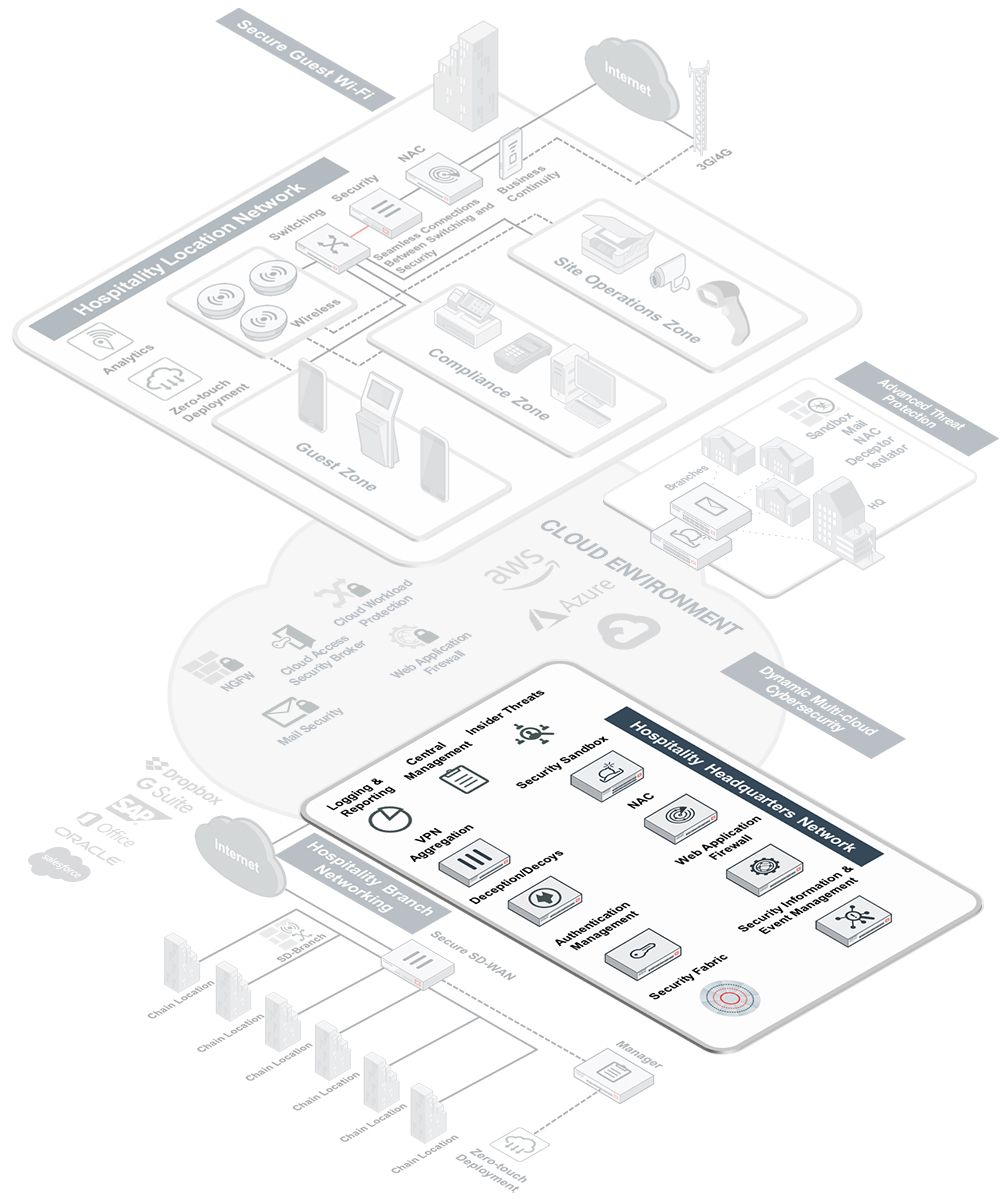 Security Transformation in Hospitality Recognizing the Many Faces of Insider Threats

A hotel or restaurant property is the visible face of the organization to outsiders, customers, and cyber criminals alike. Because 65% of the hospitality industry’s security breaches originate with point-of-sale (POS) systems, providing a positive customer experience requires securing these devices and keeping all of the location’s systems running smoothly.

Beyond POS systems, hospitality organizations often deploy a wide range of Wi-Fi-connected devices designed to improve the quality of a guest’s stay. A Fortinet Secure SD-Branch solution can provide these devices with the strong, consistent connection necessary to ensure guest satisfaction. It also provides secure isolation of business and guest networks and unified access control to protect these Internet-of-Things (IoT) devices from attack.

The hospitality location may not be the attacker’s end goal. Some attackers may breach the location’s network and use this foothold to move laterally until they reach headquarters. FortiGate Secure SD-WAN provides hospitality organizations with a robust, integrated, and automated approach to achieving the visibility and centralized configuration and security management needed across their distributed branch network.

Fortinet solutions provide key features for securing a hospitality location network, such as:

Manage security inspection to the client. Offer secure guest wireless with website redirection, captive portal, URL filtering, and more. Detect rogue APs. Administer full security inspection down to the switch port with FortiLink technology. Manage every physical port centrally and securely. Inspect all hotel POS data to eliminate intrusions and achieve PCI compliance. Plus, full SD-WAN functionality. Access Control (FortiNAC): Achieve centralized visibility and control over all devices and users in the network. Maximize efficiency while maintaining the security with our wireless LAN solution. Plus, with FortiVoice and FortiPhone phone systems you can get easy-to-use phone and a phone system with enterprise-class features for optimal employee and customer experience.
Learn more about: FortiAP, FortiLink and FortiVoice.
With consolidated security and networking, your network and Wi-Fi access are secure, plus PCI-DSS and other compliance requirements are covered.
Learn more about: FortiGate.
Engage with customers and influence on-site purchase behaviors with FortiPresence. With FortiCameras you can see everything: doors, POS terminals, public areas--whatever you need to keep an eye on. FortiRecorder captures the images for easy monitoring, storage, and retrieval. FortiAnalyzer provides analytics-powered security and log management capabilities to inform strategy, facilitate security automation, and simplify compliance reporting.

Quality Wi-Fi service is commonly cited as a primary feature sought by hotel guests. Whether travelers are visiting a location for business or pleasure, they often access the hotel’s guest Wi-Fi network without a second thought. While their primary interest is often the speed and reliability of their internet connection, security should also be a major concern. A compromised Wi-Fi network can allow cyber criminals to steal a wide range of valuable data, including everything from financial and credit card data to user passwords.

Public Wi-Fi networks are a common target for hackers because they are relatively easy to penetrate. Getting Wi-Fi right regarding both performance and security is no longer optional in the hospitality industry. Deploying FortiAP allows hotels to offer guests a highly reliable Wi-Fi experience with the ability to run multiple side-by-side guest and business SSIDs isolated and secured by FortiGate. FortiGate also allows full traffic inspection to protect hotel guests without sacrificing performance.

Guest Wi-Fi affords the opportunity to gain valuable insights from presence analytics, enabling organizations to build an even more robust guest experience. The deep packet inspection (DPI) performed by FortiGate provides hospitality locations with insight into their guests’ browsing. Combined with FortiPresence, this can allow the organization to offer personalized real-time offers to boost the customer experience.

FortiAP provides these key features to guest networks that offer both guest protection and management insight:

Hospitality organizations often have multiple locations, and the networking needs of those locations can vary greatly. A luxury hotel in a major city may use a wide variety of Internet-of-Things (IoT) devices to provide personalized service and improve customer experience. A budget hotel’s network presence, on the other hand, may mainly consist of the check-in computer and a guest Wi-Fi network.

Every location in the hospitality organization’s network may make frequent use of cloud-based services for operations and customer service. Since even minor delays can have a negative impact on customer satisfaction and may result in lost bookings, networking between hotel locations and the headquarters network must have minimal latency.

Software-defined wide-area networking (SD-WAN) solutions offer faster performance at a better total cost of ownership (TCO) than other options for WAN connectivity. FortiGate Secure SD-WAN provides a market-leading blend of application-based quality of service and security to hospitality networks. FortiGate Secure SD-WAN has a TCO 8x better than competitive offerings and can be deployed in under six minutes, as verified by NSS Labs, a leading third-party testing laboratory.

FortiGate Secure SD-WAN has the lowest TCO in the industry and delivers:

Between the large number of internet-connected devices deployed at hotel locations and their multi-cloud infrastructure, hospitality networks present a broad attack surface. This, combined with their relatively affluent client base, makes them a target for cyber criminals. As cyberattacks are increasingly automated and move at machine speed, every second counts when it comes to threat response. Fortinet provides a multilayer security solution driven by real-time threat intelligence.

FortiGuard Labs uses artificial intelligence (AI) to perform rapid threat analysis and classification, transforming raw data into actionable intelligence. The underlying AI and machine learning (ML) write signatures for newly discovered malware samples, which are then automatically distributed to other security solutions on the network via the Fortinet Security Fabric.

Zero-day threats are addressed by FortiSandbox, which analyzes potential malware in a safe, isolated environment before allowing it to reach the network. The secure sockets layer (SSL)/transport layer security (TLS) inspection functionality of the FortiGate next-generation firewall (NGFW) ensures that the 60% of malware traveling in encrypted traffic does not slip through without detection.

FortiDeceptor and FortiInsight are designed to detect potential threats that have gained access to an organization’s internal network. FortiDeceptor lures attackers into revealing themselves before they can cause damage, and FortiInsight protects against insider threats by continually monitoring users and endpoints for noncompliant, suspicious, or anomalous behavior that suggests compromise.

FortiSandbox inspects unknown files in a safe location before they are allowed onto the network. FortiMail delivers consistently top-rated protection from common and advanced threats while integrating robust data protection capabilities for on-premise and cloud-based mail solutions. FortiNAC provides network visibility, enabling network administrators to see everything connected to the network, as well as the ability to control those devices and users using dynamic, automated responses. FortiDeceptor complements an organization’s existing breach protection strategy by deceiving, exposing, and eliminating attacks originating from internal and external sources before real damage occurs. FortiIsolator accesses content and files from the web in a remote container and then renders risk-free content to users. 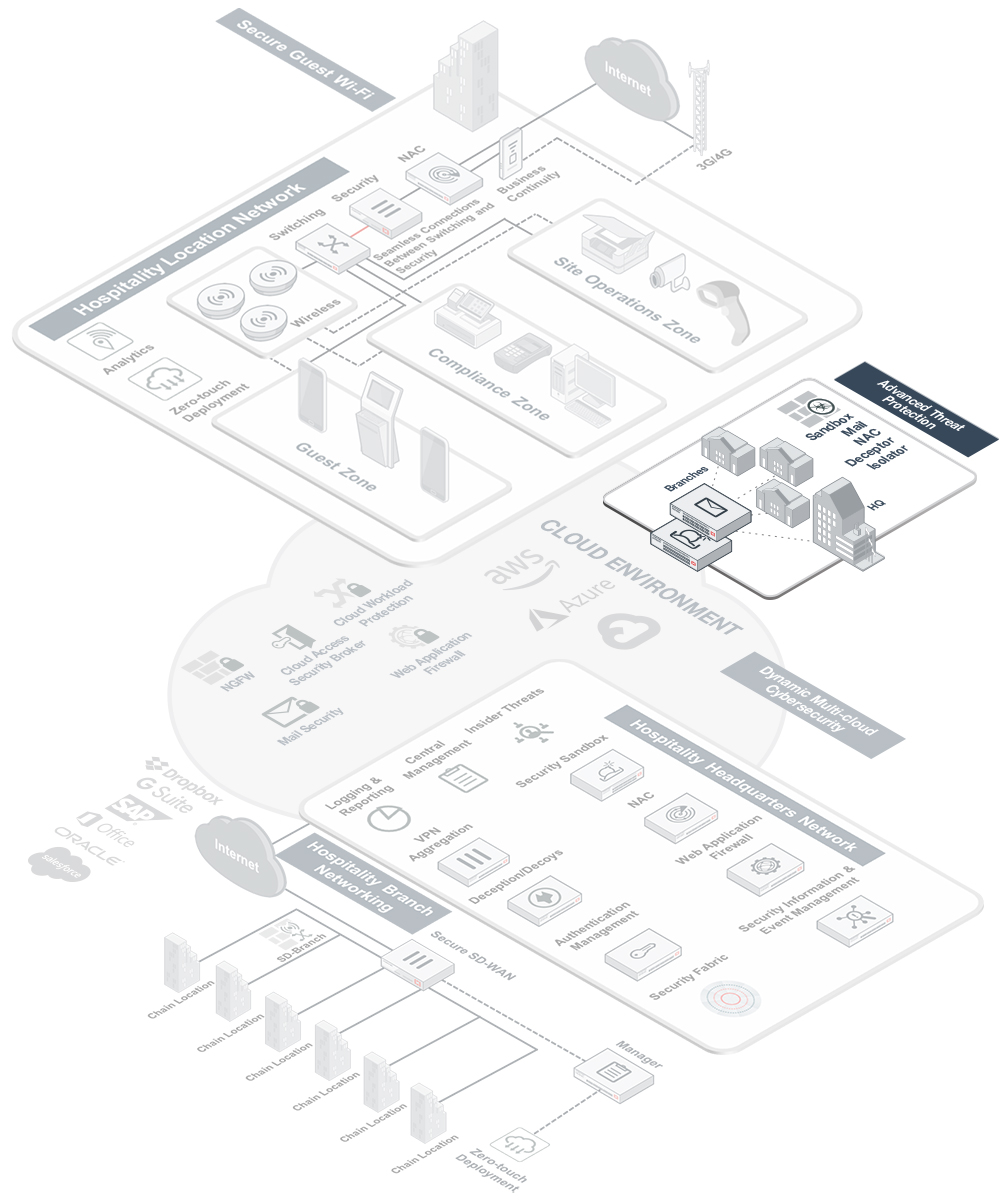 How to Achieve Optimal Internal Segmentation

Cloud service providers (CSPs) provide their customers with built-in security solutions, so many cloud users individually configure their security for each cloud. This results in silos that impair visibility across the network and increase the difficulty of defining and enforcing consistent security policies in all network environments. A adaptive cloud security approach enables retailers to collapse the silos between different cloud deployments as well as on-premises infrastructure. The Fortinet Security Fabric includes built-in integration with all major cloud offerings. This allows for centralized visibility and management of an organization’s entire network infrastructure, which enables comprehensive protection despite cybersecurity skills shortages.

Fortinet solutions provide security features built for the cloud, including: 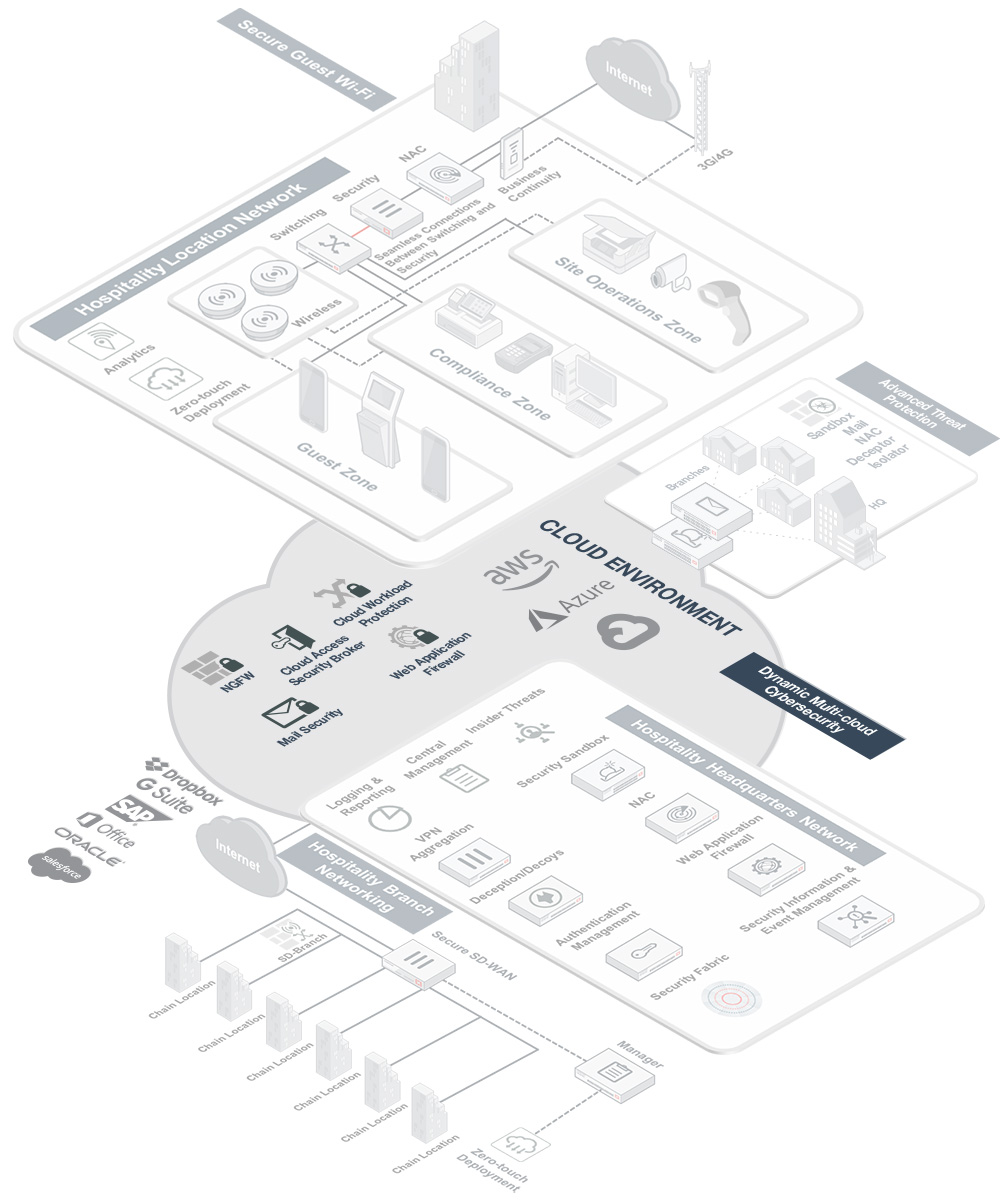