Teardown of a Recent Variant of Android/Ztorg (Part 1)

Ztorg, also known as Qysly, is one of those big families of Android malware. It first appeared in April 2015, and now has over 25 variants, some of which are still active in 2017. Yet, there aren't many technical descriptions for it - except for the initial Ztorg.A sample - so I decided to have a look at one of the newer variants, Android/Ztorg.AM!tr, that we detected on January 20, 2017.

The sample poses a "Cool Video Player" and its malicious activity was so well hidden I initially thought I had run into a False Positive. Definitely not, however, as we'll see. 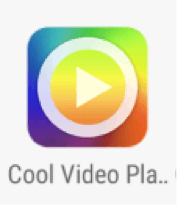 The sample's manifest shows the main activity is located in com.mx.cool.videoplayer.activity.MainActivity.

This activity initializes multiple SDKs, from which I could not detect malicious intent:

So, where is the malicious code? Or is it just some not-so-clean code in one of these SDKs that triggered a (false positive) alert?

I kept on looking in other namespaces of the app:

So, that's when I started looking into namespace a...

I immediately noticed many obfuscated strings, and couldn't resist de-obfuscating them (after all, I'm the Crypto Girl, right?).

For instance, we have this:

and c.a() is implemented as follows: 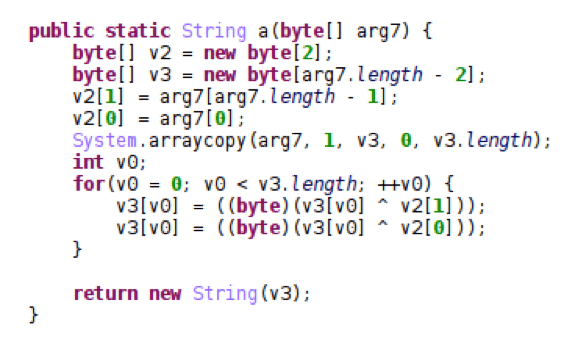 This basically takes the first and last byte as XOR key for the rest of the byte array. From that, I wrote a quick standalone Python decoder, mimicking the decompiled code. It is handy, but as I use JEB2 a script is even better where I can have it replace the strings directly in the decompiled output.

JEB scripts are a little trickier to write. Mine parses the decompiled classes, and in each class locates statements with a c.a(new byte[] { ... }). The call to the decoding function occurs in several situations though, e.g v0[6] = c.a(new byte[]{... but also a = new String(c.a(new byte[]{.... Consequently, the right hand side of the line needs to be analyzed quite closely. Then, when a call is detected, the script decodes the value, and replaces it with the result.

For example, the first figure (on the left) illustrates the initial decompiled code for a.a.a. The second figure shows the result after applying the script.

My scripts are available on Github.

Among the decoded strings, we notice many references to VirtualBox, QEMU etc. This is emulator detection, and we'll see that it is particularly advanced.

Let's go back to the flow of execution. The onCreate() method of the main activity ( MainActivity) calls f(), which calls e.i.o.q.d(). Reversing e.i.o.q.d(), we understand the function tests whether it is running on an emulator or not. It only runs the malicious part if not on an emulator, which explains why sandboxes won't be able to record any malicious activity.

The detection is based on:

But on emulators, the addresses are zeroed and easily noticeable:

We have seen that the sample implements advanced emulator detection. However, many clean apps do that for various reasons. So where is the malicious stuff? At this point, we aren't convinced yet that this is not a False Positive.

Actually, we're getting closer. After the sample has tested it is not running on an emulator, it sends an HTTP request to hXXp://bbs.tihalf.com/only/[$1]/2.html?. This is a URL we de-obfuscated at the previous step. The [$1] is replaced with gp1187 (another de-obfuscated string), and an information blob is appended to the url, where the blob is a DES-encrypted JSON object containing code version, SDK version, etc.

This is getting more suspicious.

The response is base64 encoded, and encrypted with DES-CBC (see class a.c.a):

We notice that o and p contain a link to an Android package. Are they used? Yes! As soon as the JSON object is retrieved, the sample reads the URL in o and tries to download the file. If ever o does not work, it tries p.

So, basically, in this case, the sample downloads another Android package from hXXp://alla.tihalf.com/only/gp1187/gp1187.apk and stores it locally on the smartphone.

But we are not done yet. The downloaded APK is not in clear text:

It is XOR-ed with 0x99 (see code excerpt of class a.d.f) and copied to a file named dba.jar:

This indeed results in a valid Android package:

And then? It loads the downloaded application, of course! See code below - taken from a.d.n.

The installation of the application is done via DexClassLoader and is invisible to the end-user.

Finally, it invokes a method of that application. Specifically, it loads the class referenced by key q in the JSON object, and invokes method h from the JSON object:

This Ztorg sample does a very good job of concealing its maliciousness, but we can confirm that it is malicious and not a False Positive.

In part 2 of this analysis, we will examine the downloaded application.

Sample analyzed in this article: