Welcome back to our monthly review of some of the most interesting security research publications.

S. Tanase and G. Cirlig, Drive safely on the internet lane: how smart cars can leak your data, DefCamp 2017

We don't have the paper, slides, or video for this presentation yet. Only a press article. And the car vendor's name has been kept secret.

However, the most impressive to my eyes is that they managed to get access to the infotainment system by inserting a USB key into it. Due to a vulnerability, the infotainment system read and executed files on the USB key. The researchers were then able to gain access to a Linux shell. Next, they developed a Proof of Concept malware that would track the car's position on a map (Of course, this is just an example of the potential attacks would be feasible by exploiting this vulnerability.)While the USB exec vulnerability now seems to be patched, it requires driving to a service center to have the firmware updated.

This talk explains how to dump flash - the style of the presentation is similar to a workshop. The methodology is:

GreHack also featured a cool micro-soldering workshop where attendees could experiment with de-soldering and re-balling. Both GreHack speakers and kylma came to the same conclusion: hardware reverse engineering tools are not as expensive as people think they are. You can get excellent microscopes for 500 euros or less, and most equipment is easily affordable for a company or even an individual amateur. 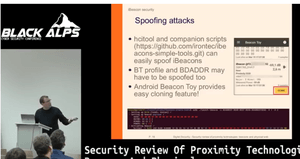 There are two primary types of Beacons: iBeacon (Apple) and EddyStone (Google). According to Wikipedia, there are also AltBeacon and URIBeacon, though these are less frquently used.

To scan, read, or clone beacons, the following tools are useful:

The Ph0wn smart devices CTF featured a BLE beacon challenge. That beacon advertised an encrypted message and participants needed to find a way to decrypt it. 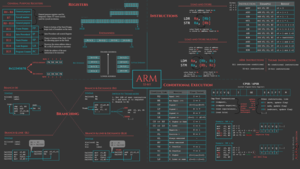 The material for this workshop is not provided on BlackHoodie, but we can guess that it is based on Azeria's ARM Exploitation workshops.

Those labs are a nice introduction to ARM assembly and shellcode writing. They are well explained and helpful for newcomers to the ARM architecture. In particular, you can learn:

-- the Crypto Girl (aka cryptax)