PowerDNS Recursor is a high-end, high-performance resolving name server that powers the DNS resolution of at least a hundred million subscribers. The “Recursor” is one of two name server products whose primary goal is to act as resolving DNS server.

On Aug. 7, 2017, I reported an XSS (cross-site scripting) vulnerability to PowerDNS and its Security Team. They assigned it the identifier CVE-2017-15092.

In this report I will explain how I was able to identify and trigger the vulnerability.

As part of FortiGuard Labs’ regular zero-day research efforts, I decided to start with a Black-box approach to see if I could identify any potential vulnerabilities in PowerDNS Recursor before moving to source-code analysis and other vulnerability identification techniques.

During the initial attack surface inspection, I realized that the product features a Built-in webserver that exposes a JSON/REST API that simplifies the way users can interact with the service in. That seemed like a good starting point to look around and I chose to research it a bit more.

I found several ways to interact with the API, but the one that caught my attention was the web interface which displayed data such as domain information, DNS query record type, and others. Interestingly, all of these information came from regular DNS queries, which I took to mean that any data contained within a DNS request should also be displayed on the screen.

To confirm my assumption, I made a normal DNS query by entering the following command from a machine located on the same network:

In the following screen you can see that the web interface shows the results from the executed DNS request (A - record type) to google.com, which directs the query to the PowerDNS DNS. 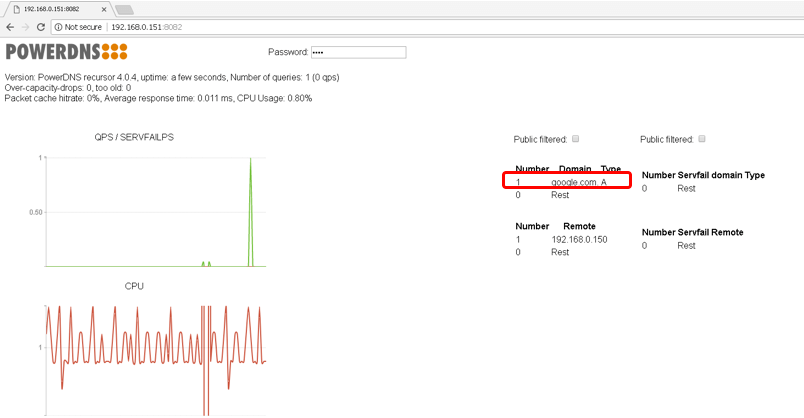 As you can see, the requested domain was displayed, which meant that I could move ahead to prepare an attack.

First, I assumed that the proper configuration was made to the PowerDNS testing instance. For more information about service configuration you can refer to the following URL: https://doc.powerdns.com/recursor/http-api/.

Next, I prepared the attack scenario to test and confirm the suspected vulnerability. I used two machines, one acting as an “attacker” and the other as a “server” (192.168.0.151) and “victim”, which would be a user with a valid password who should be able to gain access to the web interface of the Recursor.The attacker, on the other hand, would be in charge of executing the DNS request containing the XSS payload.

As can be seen in the following picture, there was no problem by sending the DNS request.

Figure 1.2 – Sending the XSS payload to the DNS server

In order to identify what the calling component is, I used a Proxy tool that provides information about the called resource (jsonstat) and its related parameters. This information is useful for mapping the findings discovered in this phase, as well as for comparison when performing other activities such as source code analysis.

Figure 1.4 - GET request generated by the web page

The response clearly showed that the JSON object also included the XSS payload generated from the attacker machine.

The main component affected by this vulnerability is a file named “local.js”. This file, among other tasks, is in charge of handling parameters (such as the api-key password) as well as displaying data (the data coming from DNS queries) to the web interface.

All of the code impacted by this vulnerability resides inside the “updateRingBuffers()” function.

By taking a quick look at the vulnerable code, I was able to see in line #69 that it iterates through all the data contained in the received JSON object (Figure 1.5). This is then handled by the line #{78,79,80,81}, and finally on line #82 it proceeds with the direct display of data on the screen.

To find detailed information for *all* the code fixes applied to the local.js file, a patch file was generated by PowerDNS and can be viewed at the following URL: https://downloads.powerdns.com/patches/2017-05/CVE-2017-15092-4.0.6.patch

Watch below for a visual walk-through.

While PowerDNS released a patch on Nov. 27, 2017, their preferred recommendation is for users to upgrade to a non-vulnerable version of the software package.

We would like to thank PowerDNS Security Team for their cooperation during the entire responsible vulnerability disclosure process.

A Look into XPC Internals: Reverse Engineering the XPC Objects