Last month, iSightPartners revealed a Microsoft Office zero-day leveraged in a targeted attack by a Russian cyber espionage team. This vulnerability has been patched in Microsoft bulletin MS15-070. CVE-2015-2424 was assigned to this vulnerability. In this blog post, we will discuss the nature of the vulnerability to give some insights to other researchers for understanding and detecting this specific Word vulnerability.

We first extracted the embedded objects inside the exploit document (sha1: e7f7f6caaede6cc29c2e7e4888019f2d1be37cef) using RTFScan from OfficeMalScanner which provides us a list of embedded OLE objects shown in Table 1. Some evidence shows that the exploit was designed to execute on a specific workstation, probably targeting the machine that has no DEP/ASLR protection enabled, with a hardcoded address, 0x7c809ae1, specified in one of the OLE objects. Nevertheless, this particular RTF document used in the attack cannot be exploited reliably in our test environments. 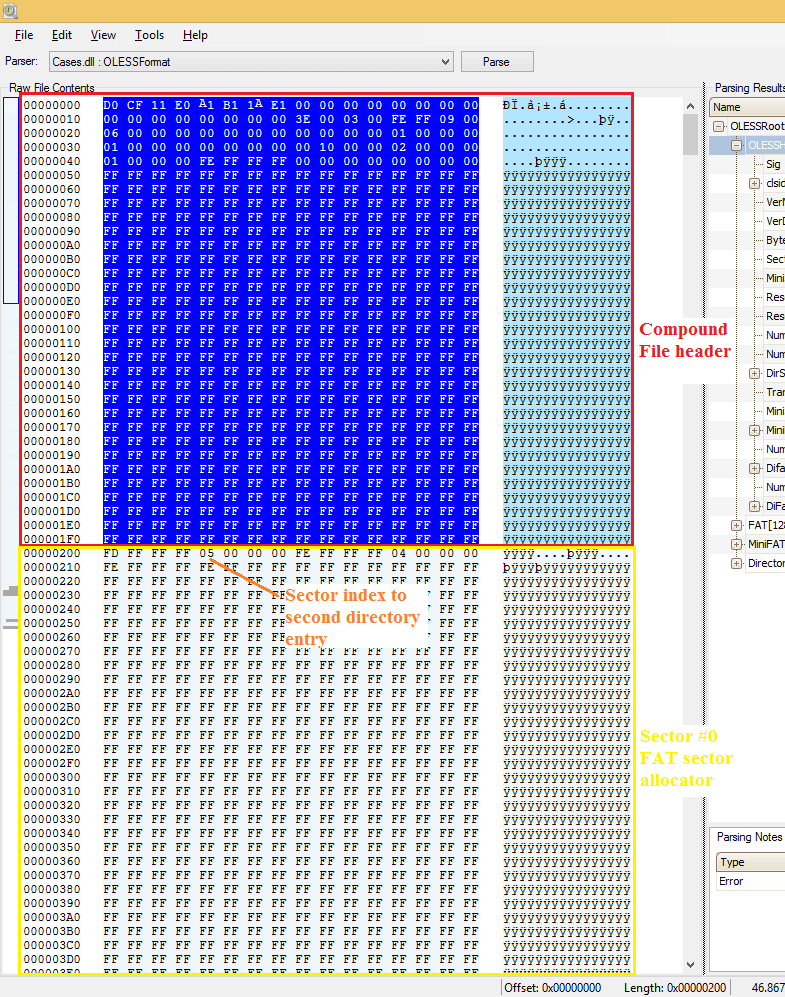 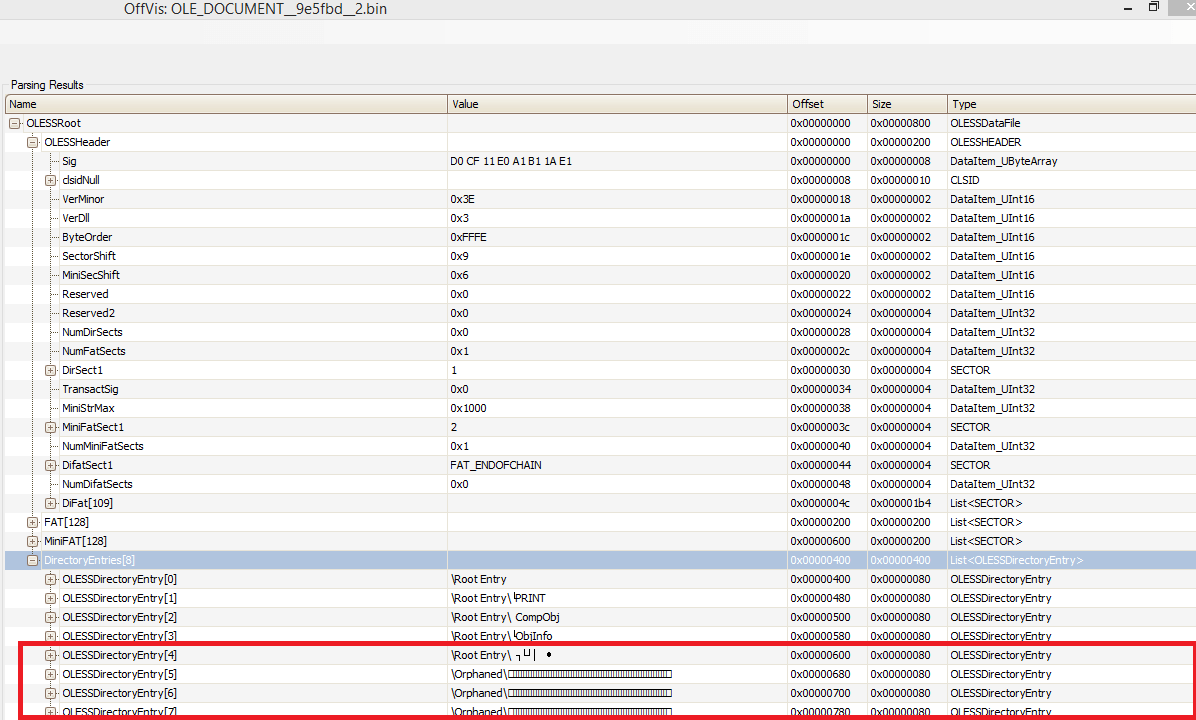 We cut out some of the irrelevant stream objects and restructured the directory entry to better illustrate the objects that we are interested in under OffVis. We did that by removing the PRINT stream object as well as the second directory entry while keeping the other stream objects. As a result, one directory sector (512 bytes) will be enough to hold all the objects' information. See Figure 5 to find out the differences between the original and modified compound file. When we look into the resulting compound file using OffVis again, we are able to determine the OCXDATA stream that actually consists of the CLSID of the TaskSymbol control, {44f9a03b-a3ec-4f3b-9364-08e0007f21df}. While the ObjInfo stream can be described by the ODT structure, the first field in the ODT structure is a 16-bit value, 0xB200, that represents the information about the OLE; this value can be described by the ODTPersist1 structure. This ODTPersist1 data specifies that the compound file is an OLE control and its data is referenced in OCXDATA. In short, the ObjInfo and OCXDATA stream objects play an important role in triggering the vulnerability as they could allow one to load any ActiveX control. Now that all the irrelevant data had been discarded, we will need to convert the resulted compound file binary to a hexadecimal string and place it into an RTF file using a simple Python script shown below. Later we will open the final RTF file with WINWORD version 12.0.6720.5000. 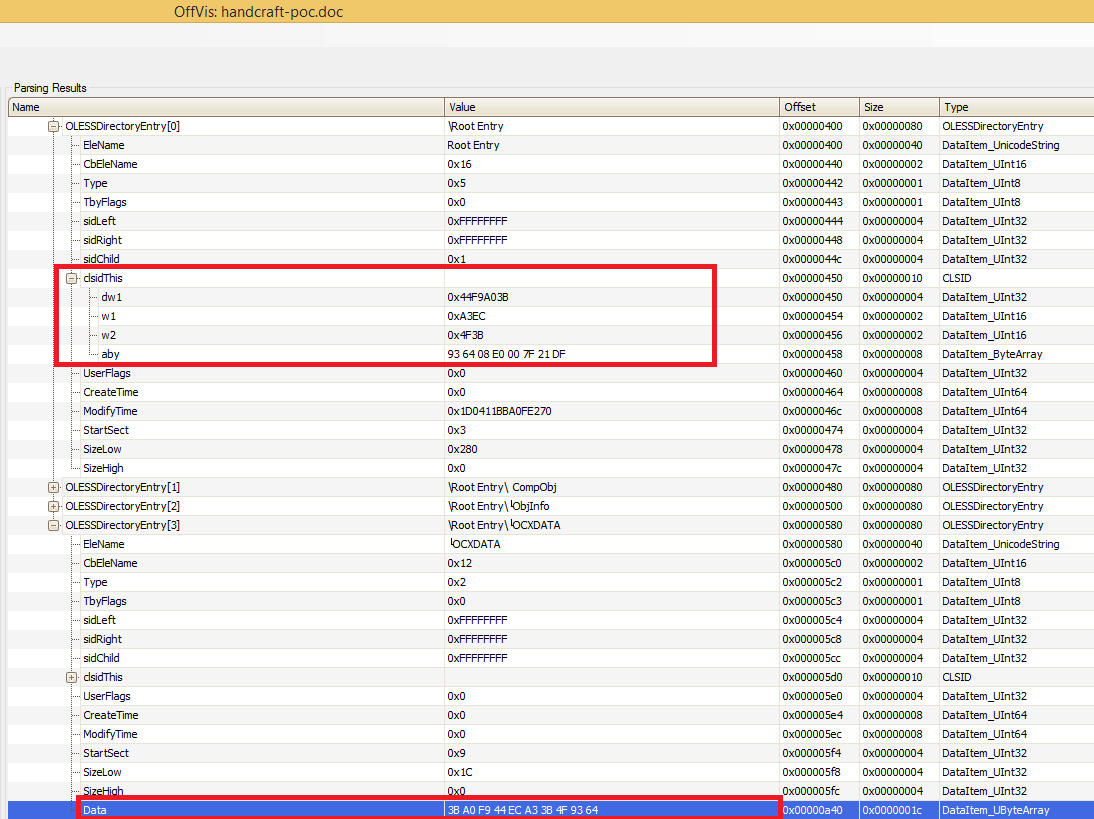 Figure 4: Handcrafted RTF file with relevant stream objects that will trigger the vulnerability

We will attach WinDBG to WINWORD with breakpoint set in Ole32!CoCreateInstance API to demonstrate the initialization of Control.TaskSymbol.1. Our breakpoint is hit with the expected TaskSymbol CLSID upon loading the resulted RTF file as shown in Figure 6. There are some DLLs being loaded before Ole32!CoCreateInstance is hit. If you are not aware, %SYSTEM32%\mmcndmgr.dll is associated with Control.TaskSymbol.1. This is why it also gets loaded before TaskSymbol initialization. This implied that a specially crafted RTF file can be used to load a desired COM associated with its corresponding DLL. This technique is not something new but it was commonly used by exploit authors to circumvent ASLR mitigation, some of which (like MSCOMCTL.OCX and OTKLOADR.DLL) have been patched by Microsoft. However, in this particular case, it was used to trigger a remote code execution exploit by attackers. This type of attack vector has been well covered by Haifei Li from McAfee Labs in the recent BlackHat USA 2015

While exploring other ActiveX objects, we realized that there is another interesting component that could potentially trigger the same vulnerability. The ActiveX object with ProgID MMC.IconControl.1 that we found has the same mmcndmgr.dll associated to it as shown in Figure 7. Based on our experiment, we can pretty confidently confirm the same vulnerability was triggered when loading MMC.IconControl.1 on unpatched Office 2010 and above. We did not verify why the same vulnerability did not affect Office 2007 but the good news is that this issue has been patched by Microsoft as we tested the latest, at the time of writing this blog post, Microsoft bulletin MS15-081 for Office. 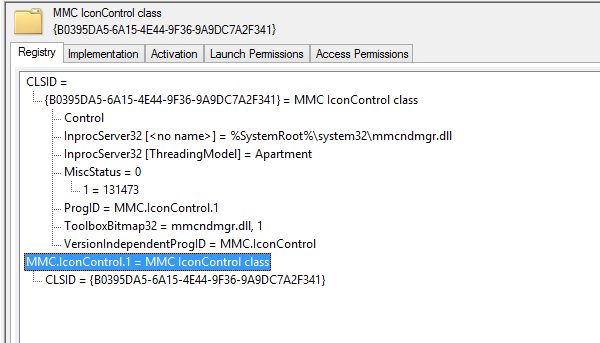 We discovered the similar faulty code path between CVE-2015-2424 and CVE-2015-1612 when trying to understand the root problem of the vulnerability. Both of them try to load the TaskSymbol control using DOC files. After some further research, we found out that CVE-2015-1612 attempts to load the ActiveX control using the Open XML format. Perhaps this is the reason why they deserved different CVE numbers.

We urge Microsoft Office users to update their Office application to the latest version in order to prevent themselves from falling victim to attackers manipulating these vulnerabilities. Meanwhile, as always, we already released generic detections in our AV (MSWord/CVE_2015_2424!exploit & MSWord/CVE_2015_1642!exploit) and IPS (MS.Office.RTF.Control.TaskSymbol.Remote.Code.Execution) engine to protect our customers from these threats.