Cryptowall is a popular ransomware which targets computers running Microsoft Windows, encrypts files, and extorts money to decrypt user files. With its predecessor’sfirst appearance way back September 2013, cryptowall has become a financial success to its authors. Following this success, the authors have now released what is believed to be the 4th generation of cryptowall with new alterations techniques.

The most obvious change from the previous cryptowall is the dropped files and message instructions after the user is infected. The new filename was renamed from "HELP_DECRYPT" to "HELP_YOUR_FILES", also to add insult to injury the new note congratulates the victim for becoming part of the Cryptowall community with hashtag #Cryptowall. 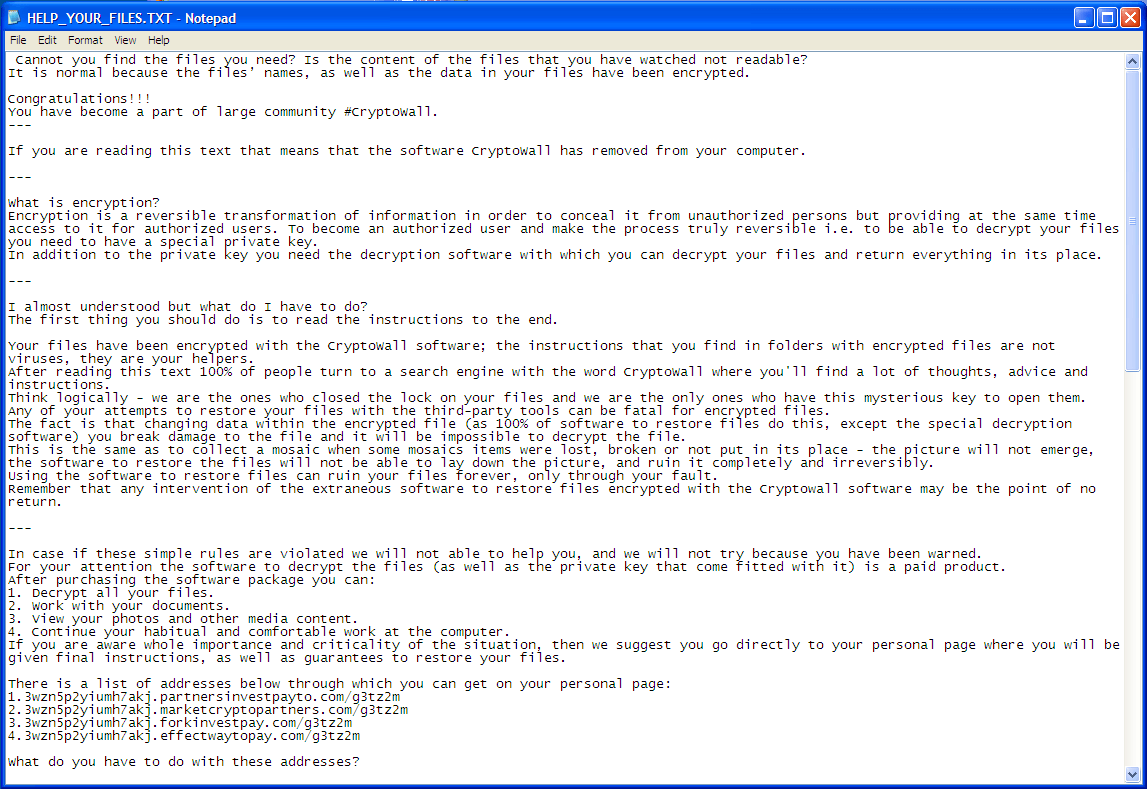 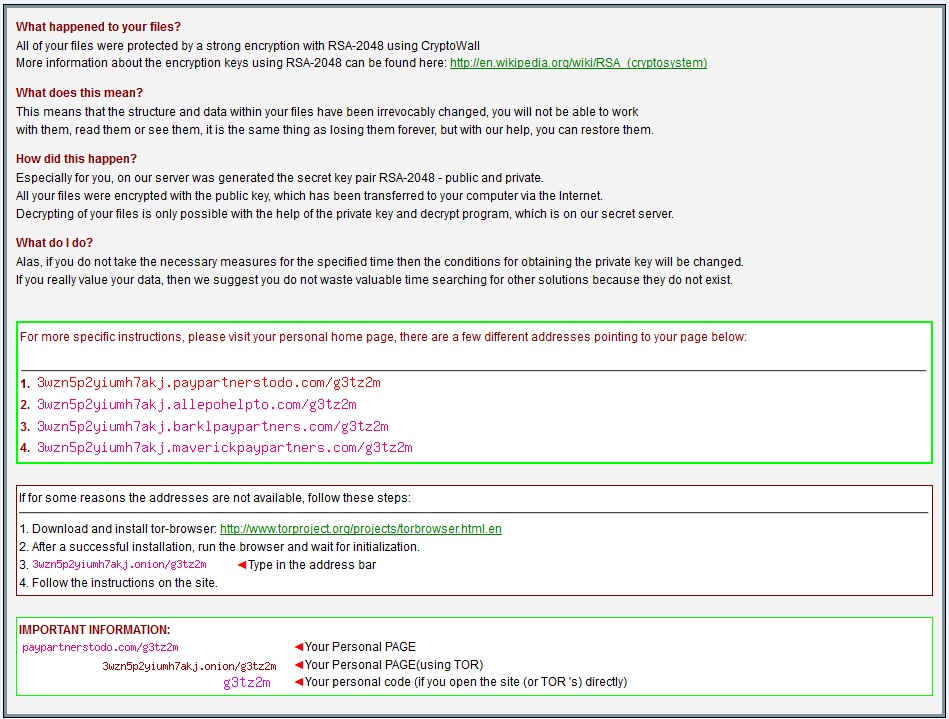 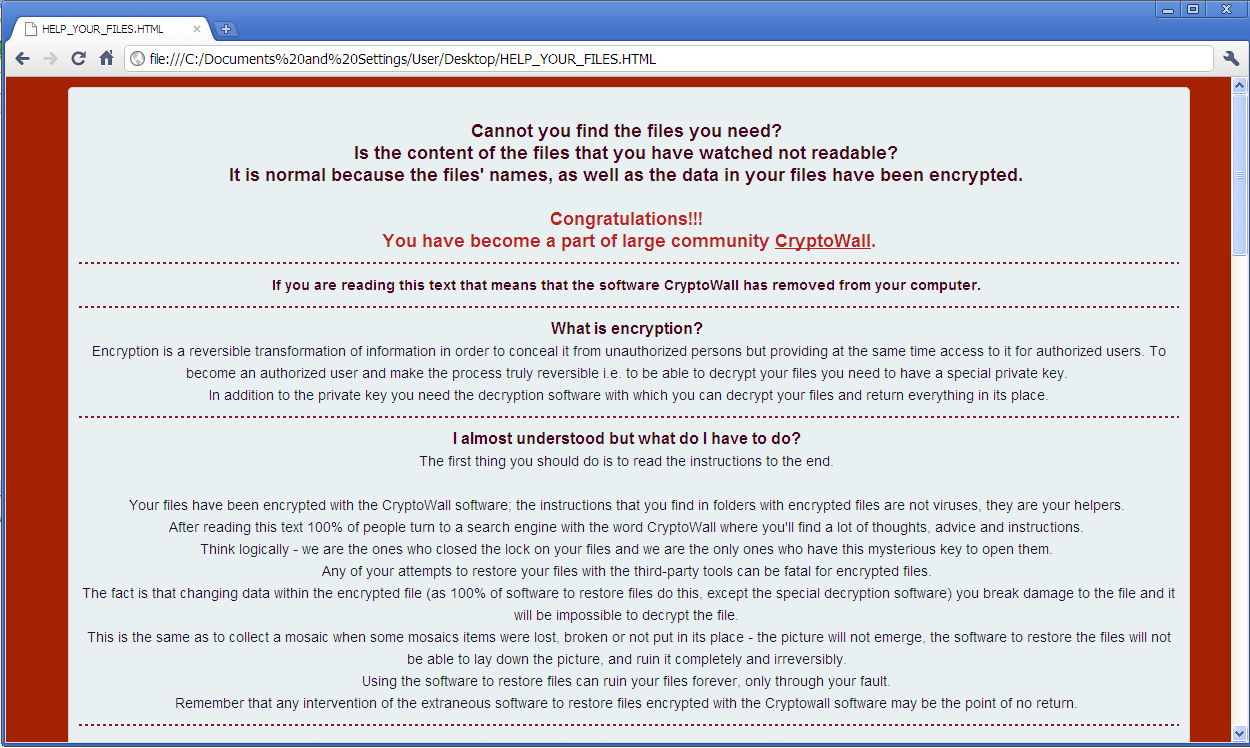 Not just the data of the file is encrypted but also the filename, making it difficult for a user to determine which specific file has been encrypted. With these, it adds curiosity to the user if important files were encrypted. It increases the possibility for the user to pay the ransom.

It gets the keyboard language by using the API GetKeyboardList and compares it to its hardcoded values. It does not infect the machine if it sees any of these values. 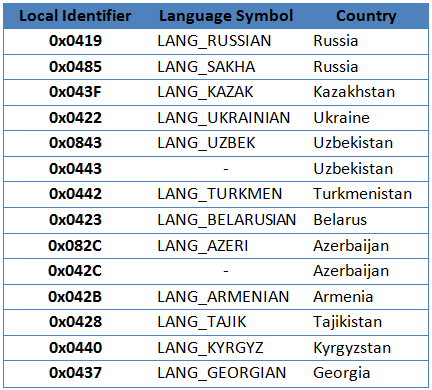 Use of CRC32 Hash

Same with the previous Cryptowall, it uses the hardcoded CRC32 hash to check and compare for blacklist (countries, filenames, directories, and extensions) and targeted extension to encrypt.

The malware has a list of the two-letter country code of countries to avoid. Here are the countries: 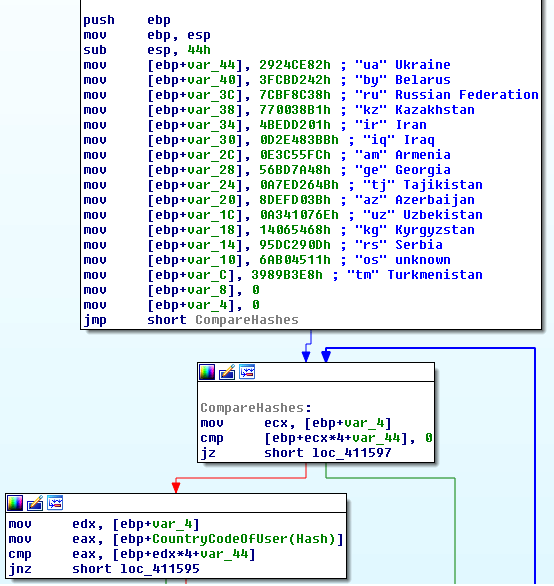 If the code matches one of these countries, the malware will remove all traces of itself from the system. Otherwise, it proceeds with its main payload. This also implicates the possibility that attackers operate under these countries.

The malware is cautious not to encrypt important files that could disrupt the normal operation of the computer. The directory will be skipped if its folder name is any of the following: 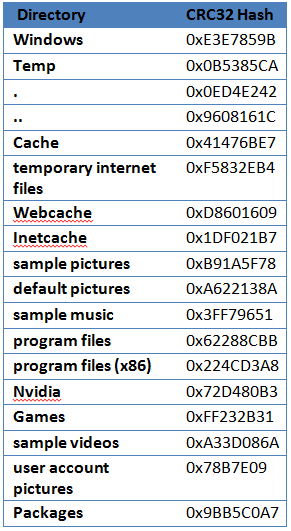 Having dropped a ransom note the malware makes sure that this will not be encrypted and the appearance of the system still stay the same. Here are some of the filenames that will be skipped: 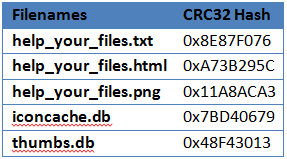 The following are the list of extensions that the malware skipped to encrypt. These extensions are basically related to system files that may affect system operation if modified.

From the previous version it targeted around 312 file extensions while in our analysis we found out that 358 extensions were being targeted. Listed are 345 out of 358 extensions that we managed to identify:

The malware then proceeds to enumerate files from the system. After a successful check against the blacklist and if an enumerated file matches one of the target extensions, the malware will proceed to encrypt the file.

Similar to its predecessor, all communications with the C&C server uses RC4 encryption. The C&C server list is decrypted using a short hard-coded key, while the encrypted message to be sent to the server uses the malware generated RC4 key.

Sample of encrypted message sent to the C&C server

In our analysis, we were able to track down C&C domains the sample connects to. A list of these domains is available below.

The code updates highlighted in this post demonstrates the Crypto Wall operators’ determination to persist in the wild and continue its lucrative business. Unless arrests were made, we expect that Cryptowall will continue to be updated to remain effective with its extortion techniques, as exemplified in this variant’s new filename modification behavior.

Fortinet, in cooperation with the Cyber Threat Alliance, will continue to monitor developments regarding this prominent threat.

Collaborating on Threat Research: What We Learned from the Cyber Threat Alliance CryptoWall v3 Research Project