This is the second part of the FortiGuard Labs analysis of the new Poison Ivy variant, or PlugX, which was an integrated part of Poison Ivy’s code. In the first part of this analysis we introduced how this malware was installed onto victim’s systems, the techniques it used to perform anti-analysis, how it obtained the C&C server’s IP&Port from the PasteBin website, and how it communicated with its C&C server.

What we didn’t talk much about in that first blog was the control-commands that are used by this malware, partly because only a few of those commands were used during our analysis. However, as you may know, RAT malware usually has many control-commands so that attackers can effectively remotely control a victim’s machine.

So, after our initial analysis, we monitored the C&C servers and captured their packets. Fortunately, we were able to successfully collect enough attacks and packets so that we could obverse and document its behavior. In this analysis, I’m going to focus on the control-commands used by the C&C server as it attempts to penetrate the victim’s network by exploiting vulnerabilities.

Although the C&C servers have now been shut down, we found a way to decrypt the communication data from the captured packets in order to analyze its behavior.

As per my analysis, this variant of Poison Ivy eventually launches the MS17-010 (Eternal Blue) attack against the machines located inside the victim’s LAN. Let’s now take a look at how it performs this exploit.

The first module (which was injected into svchost.exe when svchost.exe started) is executed in svchost.exe, and was the first one added into the doubly linked list. I call it the host module.

I named these module1, module2, etc. according to the order in which they are added into the doubly linked list,  The six modules are decrypted by the host module.

Figure 1 shows a view of the module node of the host (svchost.exe) in memory. 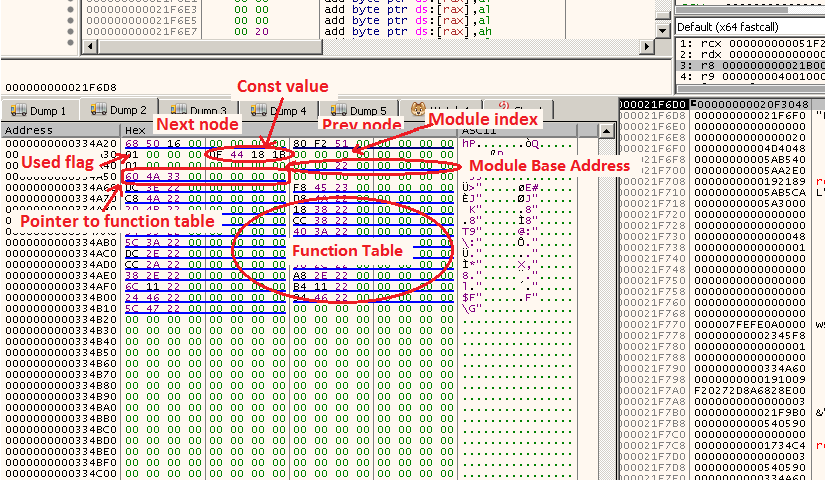 Figure 1. View of the host module node in memory 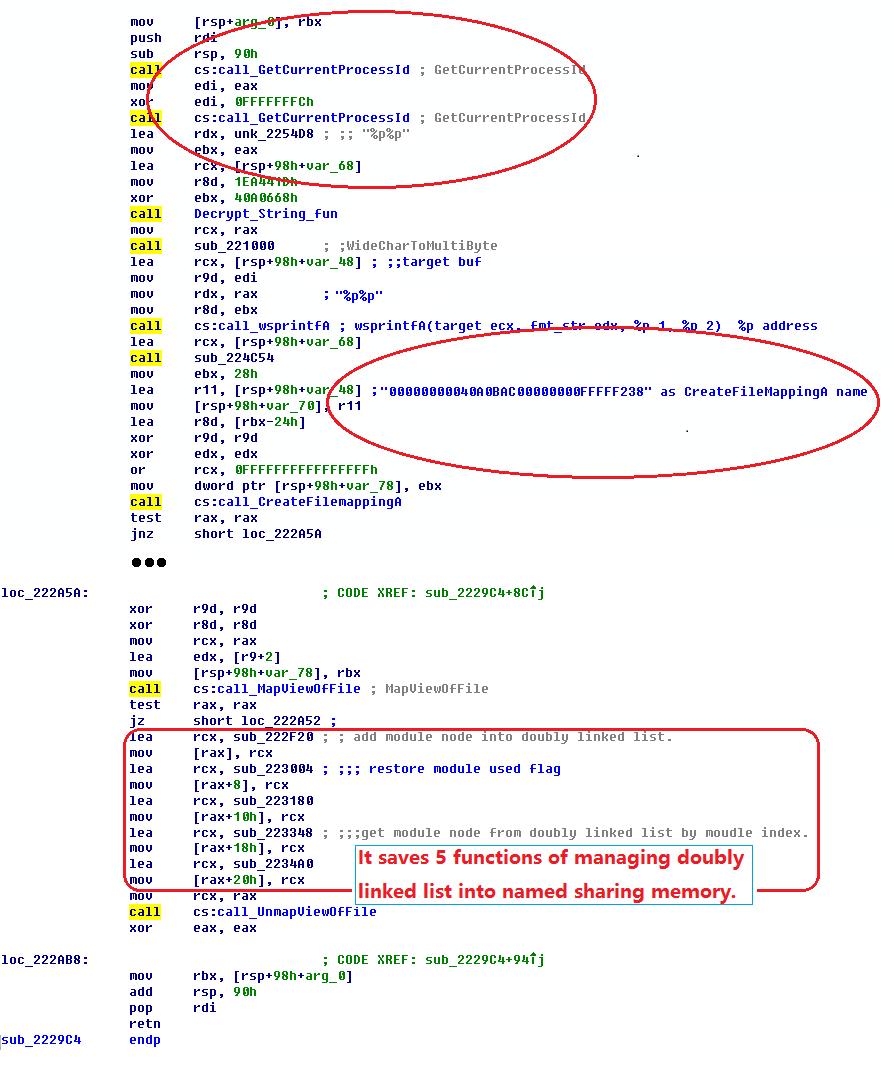 Here is the modules’ information in my test environment:

In order to easily understand the C&C packets, I will explain the packet structure here. As I explained in the first blog, the packet payload is encrypted. Through analyzing its decryption function, I was able to write a python function to decrypt the data. This is the same function that the host module used to decrypt those six modules, as well as the C&C server IP&Port from the PasteBin website, but different decryption keys are used.

The decrypted packet consists of two parts. The first 14H bytes are the header, and the data starts at offset 14H. The packet structure looks like this:

In the first blog I introduced commands “030001” and “030003”. Please refer here for more details. By the way, the malware uses big-endian byte order to save its data. The control command is a Dword value, whose high 16 bits are the module index, and the low 16 bits is a kind of code branch switch. Once the malware gets the command it retrieves the module node from the doubly linked list by matching the module index. It then calls the functions of that module to handle this command data. 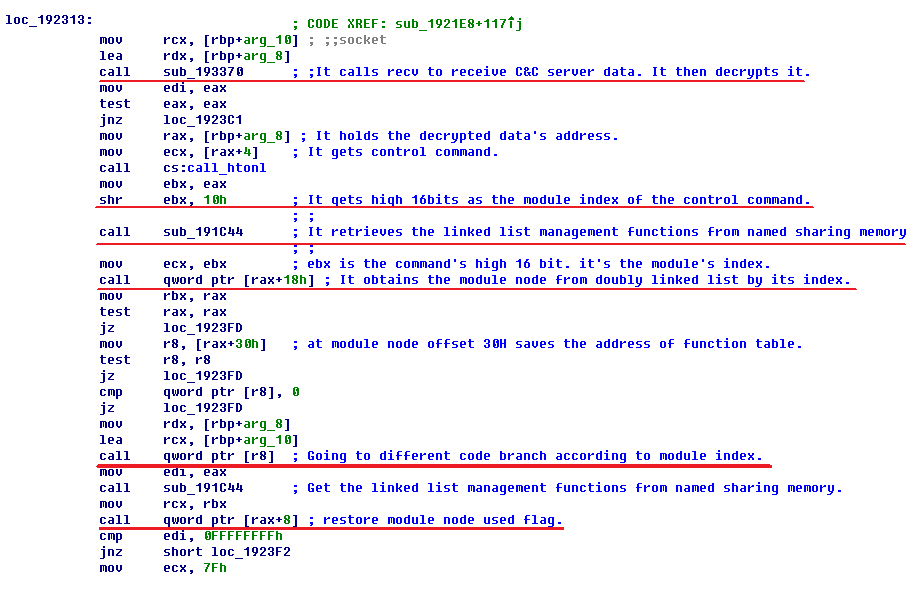 Figure 3. All packets from C&C server are dispatched from here

Figure 3 shows the code snippet used for dispatching the C&C packets to the correct module for processing. After “call sub_193370” we got the decrypted C&C server packet in [rbp+arg_8]. “call sub_191C44” is used to get the management functions in rax from the named sharing memory. “call qword ptr [rax+18h]” is used to call one management function to get the module node from the doubly linked list using the module index in rcx i.e. high 16 bits of command. “call qword ptr [r8]” calls the first function of the function table to process the received packet.

From the above analysis you should now be able to clearly see the entire process of how the malware processes the C&C server’s packets.

So let’s now take a look at what the “00000003” command is used for. Figure 4 shows the original received packet and the decrypted data. 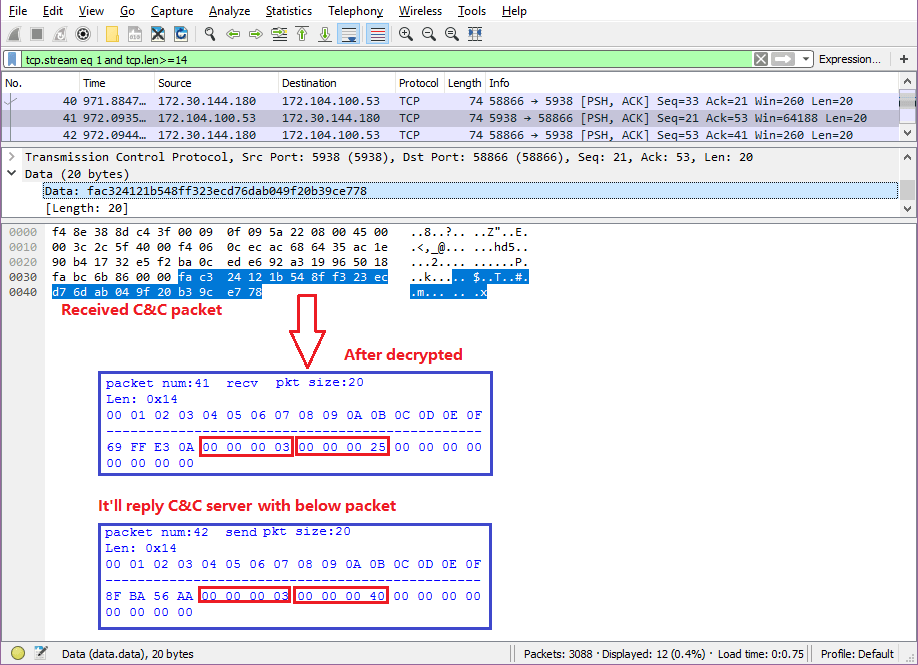 From the command “00000003” details we know that this packet is going to be passed to the host module (its index is 0), and then be processed by the first function in the function table and the “0003” branch.

The C&C server then sends back command “00000001” with a new module attached. Below is part data of this packet after decryption, where you can see that the sub-command is “00000025”. In code branch “0001” it decompresses the received module, then gets its code initialized, and finally adds it into the doubly linked list. This module’s index is 0x25, so I call it Module25.

It later sends command “00000001” with sub-command “00000000” to the C&C server to let it know that the 0x25 module was installed successfully. This module will be used to penetrate the victim’s network.

BTW, this module’s information in my test machine is:

I’m sure that the C&C server sent commands to get the victim’s network configuration (my local IP, Gateway, DNS server), though I did not catch them.

Figure 5 is the screenshot of the network configuration of my test machine. 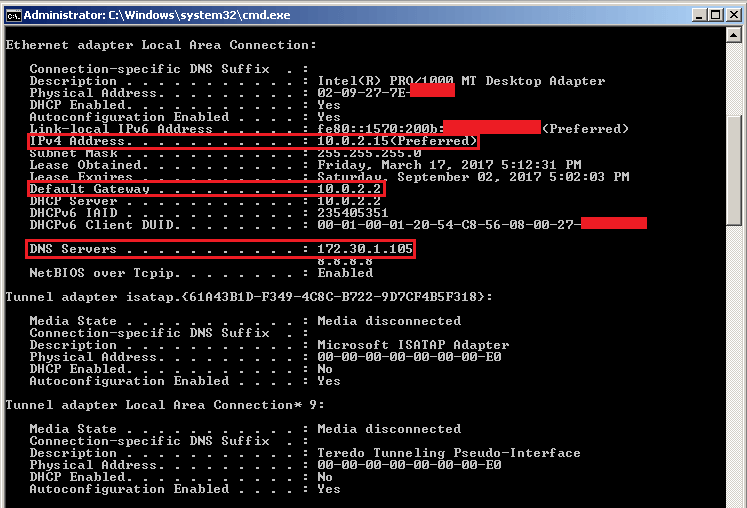 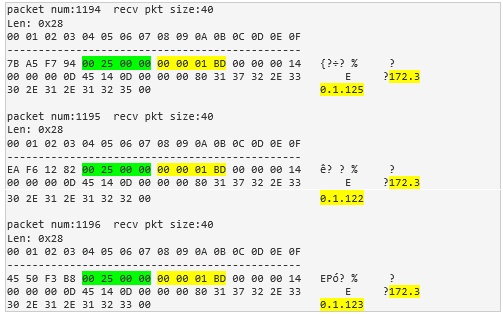 From this data it is easy to see that there are IP addresses from three local machines. The sub-command “000001BD” refers to port 445.

Module25 processes this packet, pulls the IP and port information from the packet, and then makes a connection to it. If any error occurs, it sends the status to the C&C server.

Once successfully connected to the destination machine, the malware then serves as a middleman that keeps transferring the two sockets’ data between the C&C server and the destination machine (like man-in-the-middle does). In module3 we also see its debug output strings “SoTransfer(%p<=>%p)...\r\n” and “SoTransfer(%p<=>%p) quit!\r\n”. Figure 6 and 7 show the attack view in Wireshark. 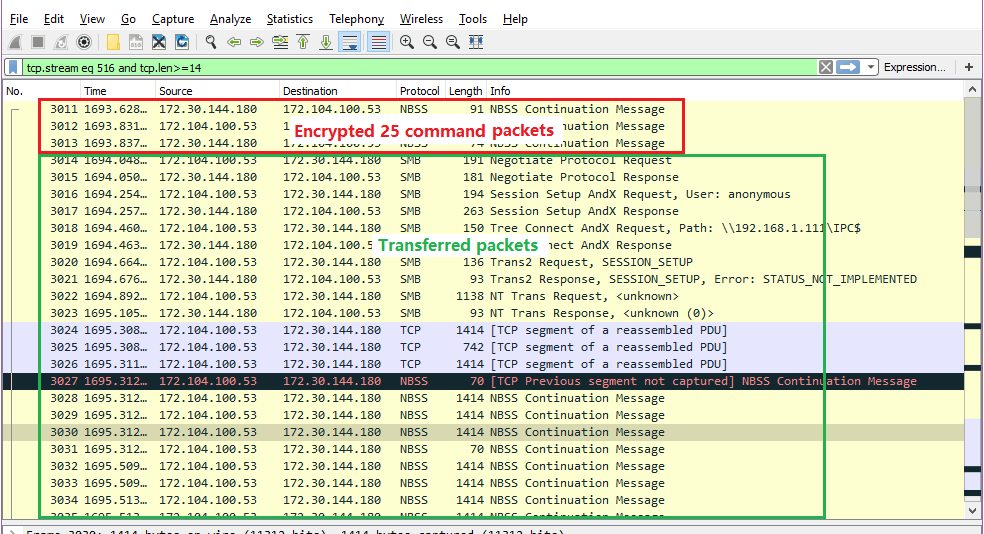 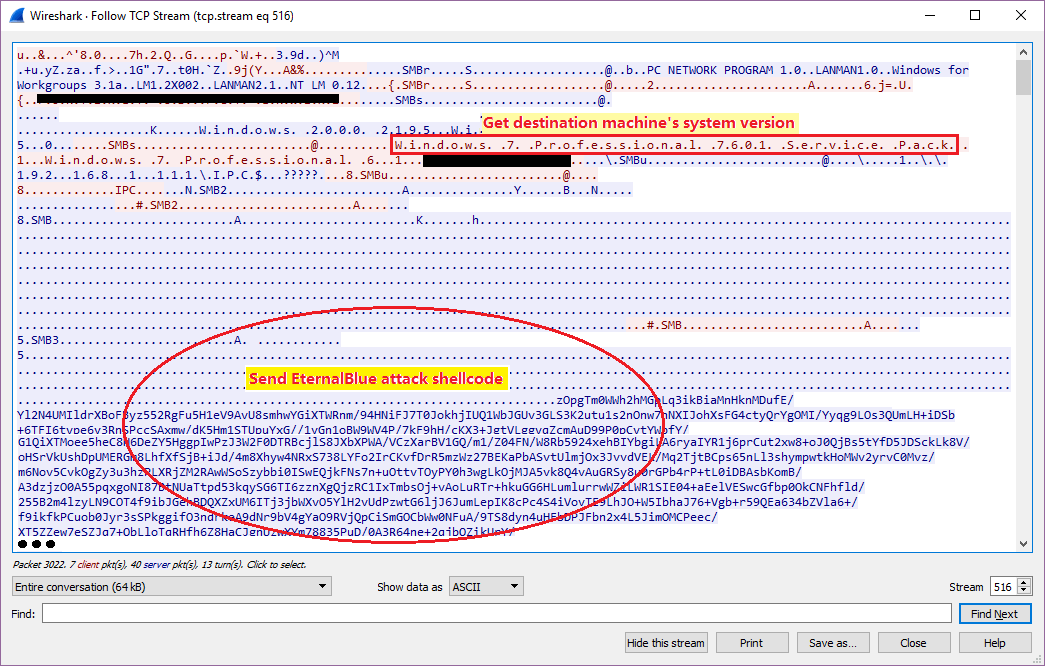 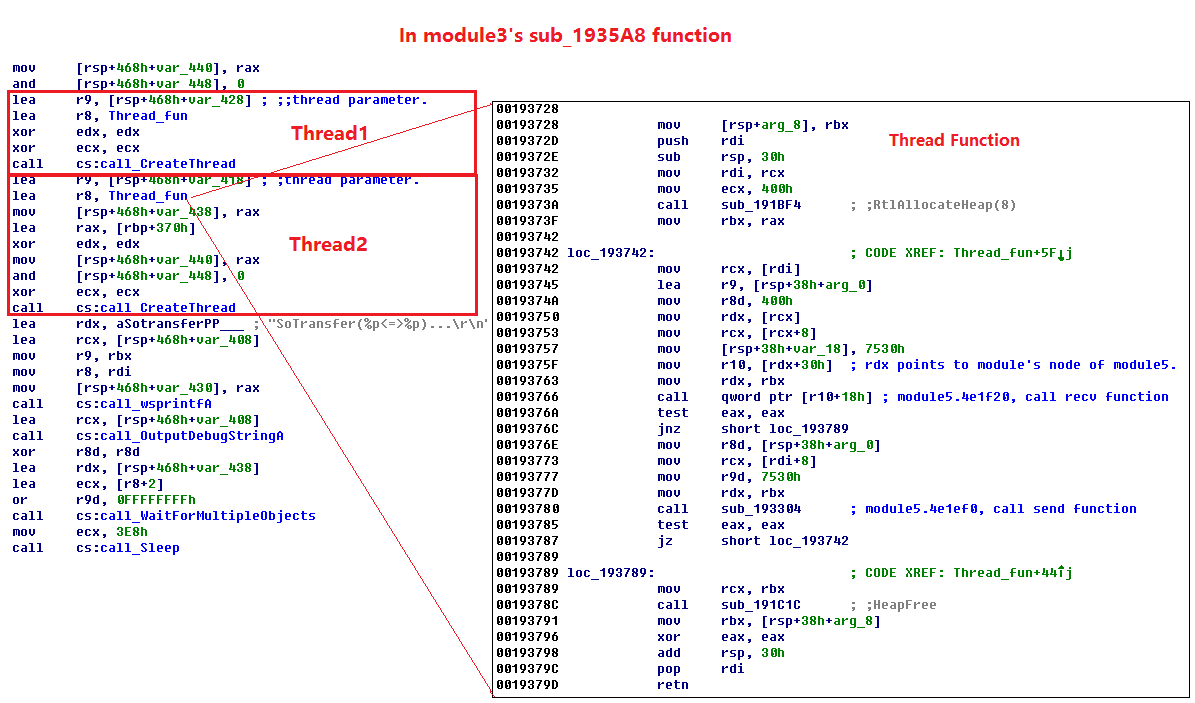 Based on our analysis, this new Poison Ivy variant takes advantage of the EternalBlue exploit to spread. Once one system is infected by this variant, other systems on the same network are likely to be infected by the compromised system.

Fortinet IPS signature MS.SMB.Server.SMB1.Trans2.Secondary.Handling.Code.Execution was released in March 2017 to protect our customers against the EternalBlue attack.