In March 2015, a Network Configuration Leak vulnerability was disclosed to Ring as part of FortiGuard's Responsible Disclosure process.

The vulnerability had been granted CVE-2015-4400: DoorBot Network Configuration Leak.
We have issued an Advisory and IPS signatures (DoorBot.Network.Configuration.Leak) for the same.
We have not been informed by Ring about any patches issued for the reported vulnerability.

The Ring, formerly known as Doorbot, is a connected doorbell that comes with network capabilities. It connects to a user's home Wi-Fi and allows the owner to interact with visitors via the doorbell from a smartphone, or receive mobile alerts about every ring on the doorbell. It can also be connected to existing doorbell wiring to allow answering the door using a smartphone.

In March 2015, I found a vulnerability that allows it to let visitors into your home Wi-Fi network as well.

Put simply, the vulnerability can be attributed to the poor configuration of it's GainSpan Wi-Fi module that provides an API to recover the Doorbot's network configuration in Plain Text. 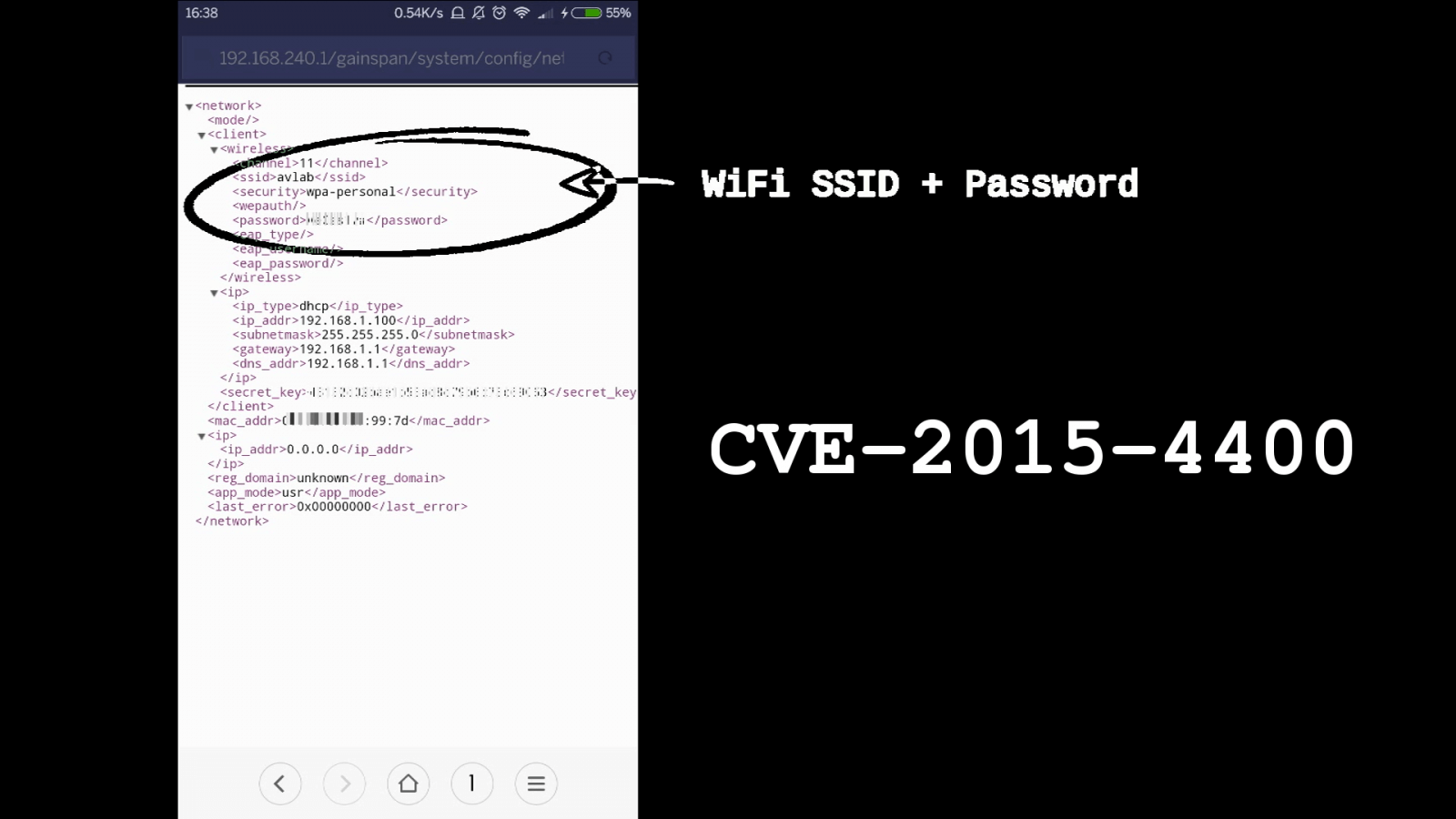 On a sidenote, speaking of Plain Text Credentials, the Doorbot Android application analysed in March 2015, stored the logged in users' credentials in Plain-Text on the  phone. The good news is this was fixed by Ring soon after in future updates of the application.

Doorbot's claim to security until now was the inaccessibility of the Reset button at the back of the device, thanks to their proprietary screw (that also incidentally is what protects the device from theft).

In my experience with the device, any average Joe screw-driver can be used to unscrew the device and access the Reset button, which ironically has been made more accessible on newer versions of the device.

I guess that leaves us with 'Encryption to the Rescue!' to at least protect your Wi-Fi Credentials.

Not only can the vulnerability be exploited by an attacker when the device is in use, by gaining access to the Reset button, it could also be exploited in the case of Doorbots that are re-sold or discarded, revealing network information from the previous owner/setup at the press of a button.
(We won't be selling our Doorbot anytime soon ;))

GainSpan Wi-Fi modules are generally used add the 'Internet' to 'Internet of Things' devices i.e. they provide these devices with their ability to connect to the Internet.

They are designed to support two modes of operation :

This is not the first time a poorly configured GainSpan module has leaked a user's network configuration - previously observed on Twine and Wi-Fi Smart Scales stressing the importance of secure configuration and implementation of these ready-to-use technologies on IoT devices.

Although this vulnerability has made BackDoorbot a reality, considering the fact that one would need to be within the Wi-Fi network's range to be able to exploit it, a Doorbotnet remains a theoretical concept.