While ransomware has attracted much attention from security researchers lately, other malware hasn’t stopped. They are quietly seizing their own place in the attack market.  This article analyses one of them - “Bayrob”.  Our analysis is based on a new variant of Bayrob. We will discuss its background and describe some of its most interesting features, including the purpose of several different processes/services, code obfuscation, data encryption, and its C&C communication.

The family of “Bayrob” malware first showed up around 2007. However, it was not very well known and seems to have disappeared until the beginning of this year.  Despite being in the wild for so long, and perhaps because of its complexity, there has been no detailed technical analysis written about Bayrob.

We have been tracking the Bayrob family of malware since it first appeared, and our VEX system started capturing a new Bayrob variant near the beginning of the year.  This variant was spreading quickly and more intensely than previous variants.  We discovered that it uses complicated techniques and features similar to previous variants, but has introduced a new C&C communication protocol.

One interesting thing about Bayrob is its multiple processes. Bayrob drops several copies of itself into a folder on the infected machine and creates new processes / services from those copies. Each process or service has their own tasks and follows their own route to finish the tasks.

The diagram below shows the process tree of the first three processes.

The original sample drops one copy of itself, runs the first copy, and exits.  The name of the first copy is a fixed prefix (“ulms” in the sample we analyzed), appended with a randomly generated string. The original process also displays a fake error message to hide its actual malicious behavior.  Below shows how it achieves this and the actual message.

The first copy then drops another copy of itself. It also creates and starts a service, as shown below. The service runs major tasks such as C&C communication.

Bayrob differentiates its running stage (in different processes/services) by file names. To identify where in the lifecycle it is, Bayrob also uses some dummy drops (not PE files) as identifiers. 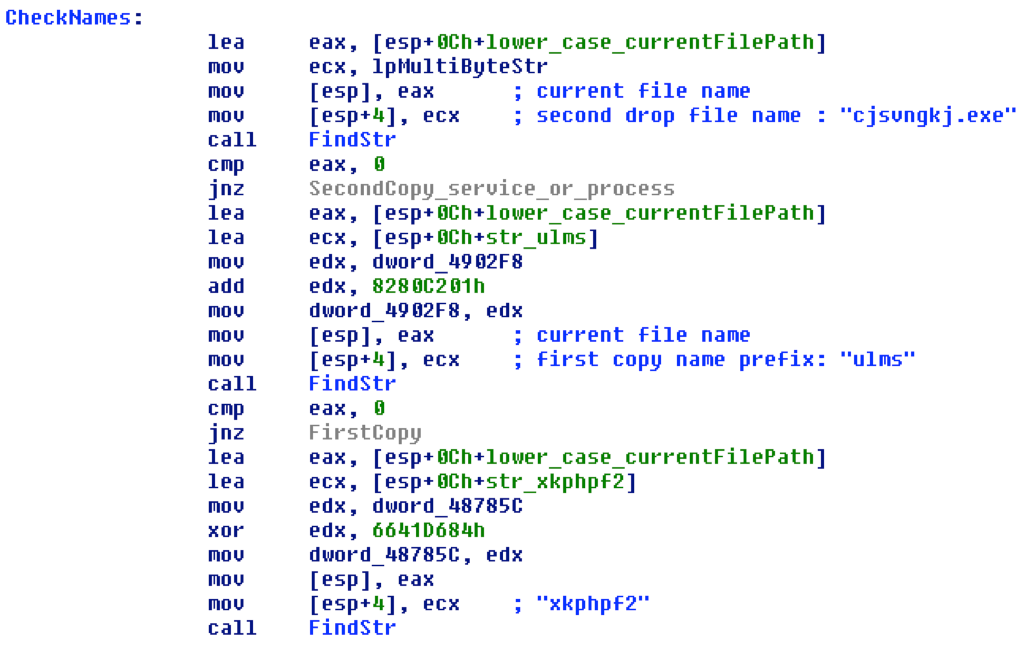 Bayrob also adds a lot of junk code into its normal functions to hinder static and dynamic analysis.

This junk code is everywhere. Figure-5 shows the extent and format of the junk code. The malicious code (marked as “Useful Code” in the figure) is part of a routine which checks if the caller is an admin.

Besides code obfuscation, Bayrob also encrypts critical data, including most strings. As shown below, the string “Software\Microsoft\Windows\CurrentVersion\Run” is decrypted by the function “Decryption,” with two arguments that are associated to the original data and size. After decryption, malware will use this string as a registry path so it can survive when the system reboots. 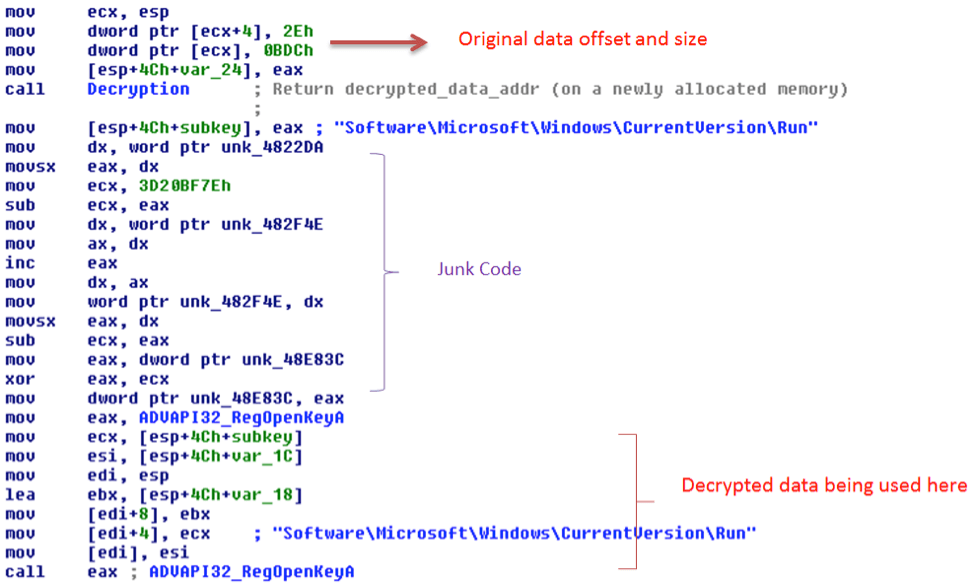 The function “Decryption” mentioned above is a customized algorithm. This function takes two arguments: the first one is an offset; the second one is the size of data to decrypt.  We also used python script in IDA to simulate the Decryption function (Decryption (offset, size)) as shown below. 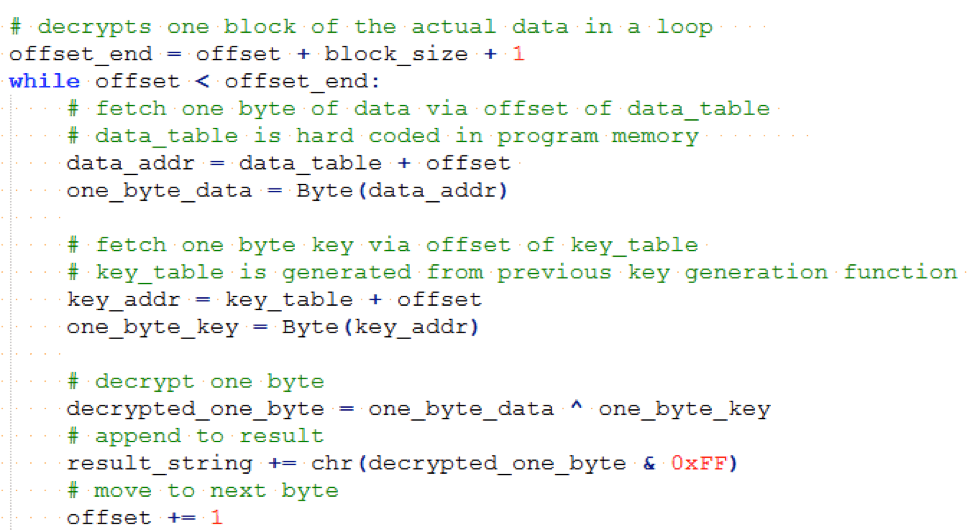 After the executing of the decryption script, we can access all the decrypted data, including the text strings, some of which are shown below.

This variant of Bayrob uses custom protocols over TCP/IP to communicate with its C&C server. Different network packets are encrypted in different levels using different methods.

Bayrob has an interesting sequence with regards to its sending packet size. The first four packets sent have the following sequence: 8 bytes of data, 1 byte, 2 bytes, and 2 bytes of data to verify/register itself.  The size of the fifth packet is indicated by the contents of the second packet. Bayrob sends the first group of packets mainly to verify/register itself to its C&C server.

We will provide more details about the Bayrob C&C communications in the next blog post.

The authors of Bayrob have introduced a lot of tricks to make this malware much more difficult to analyze. Our mission is not only to protect our customers, but to also provide critical technical information to those who are interested in further investigation. Of course, we will keep tracking this malware family and provide further analysis results and updates once we gather more information.