Yesterday, a new ransomware wreaked havoc across the world. This new malware variant, which combines the functionality of ransomware with the behaviors of a worm, is being called Petya, Petrwrap, and even NotPetya, since researchers are still investigating as to whether its ability to modify the Master Boot Record of a targeted machine is based on the Petya family of malware. Fortinet has designated this new hybrid form of malware as a ransomworm, and this outbreak was reported to use the same worm mechanism to spread across the Internet as WannaCry, which contributed to the global scale of this outbreak.

This post will discuss some of the technical aspects of this ransomworm that have been investigated by FortiGuard Labs. For this blog we will refer to this ransomworm as Petya. It is detected as W32/Petya.EOB!tr. You can read our last blog related to this topic here.

The malware arrives as a DLL, with its malicious actions found in the first exported function.

When executed, the first thing it does is enable three token privileges: SeShutdownPrivilege, SeDebugPrivilege, and SeTcbPrivilege. 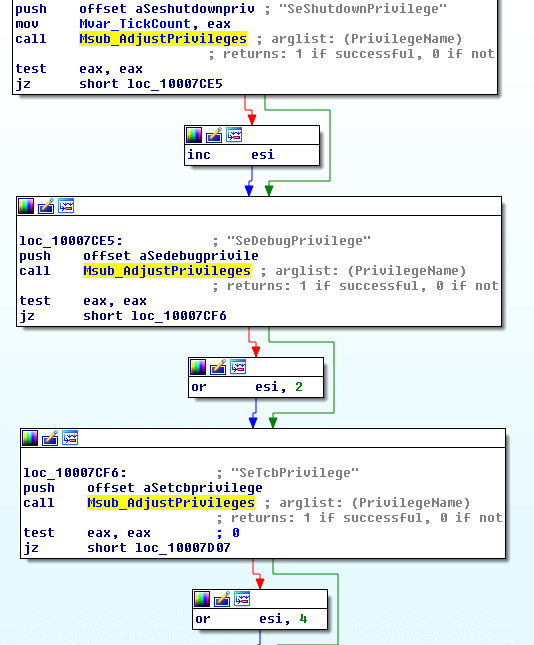 It then checks the running processes by performing a hash on the process name. Part of the hash algorithm is as follows: 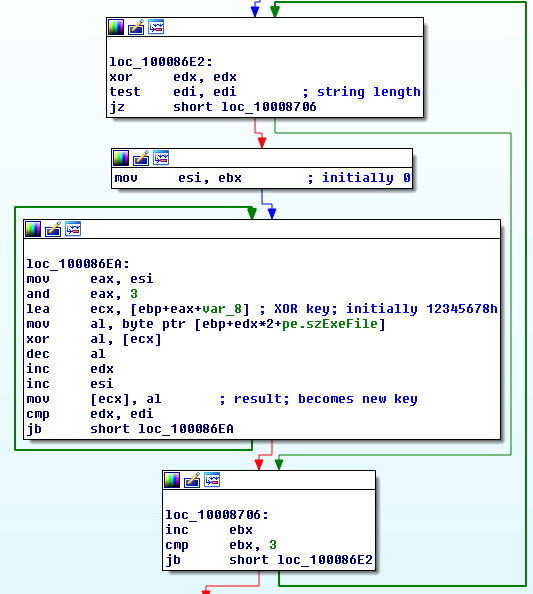 It then checks if the resulting value is either of the following, and then sets some flags accordingly:

After checking the running processes, it then gets its own filename.

Figure 3. Getting its own filename.

This is important as it will use this later as a sort of killswitch.

After this, Petya checks its commandline. We have not fully explored this part of the malware to determine what arguments it expects. Nevertheless, we are able to continue our analysis even without those arguments.

It then checks if its flag for the adjusted token privileges is 2. This means that the SeDebugPrivilege has been enabled. If so, it skips two function calls (which we will look at later), and then proceeds to shut down the system.

In the figure above, we can see that if the flag is not 2, Petya calls two functions.

Going into the first function, which we have called Msub_CreateWindowsFile, we can see that it checks if a file exists (via PathFileExistsW). If it does, then it branches into code that calls ExitProcess, thereby terminating the malware. Researchers have identified this function as a possible “killswitch.” 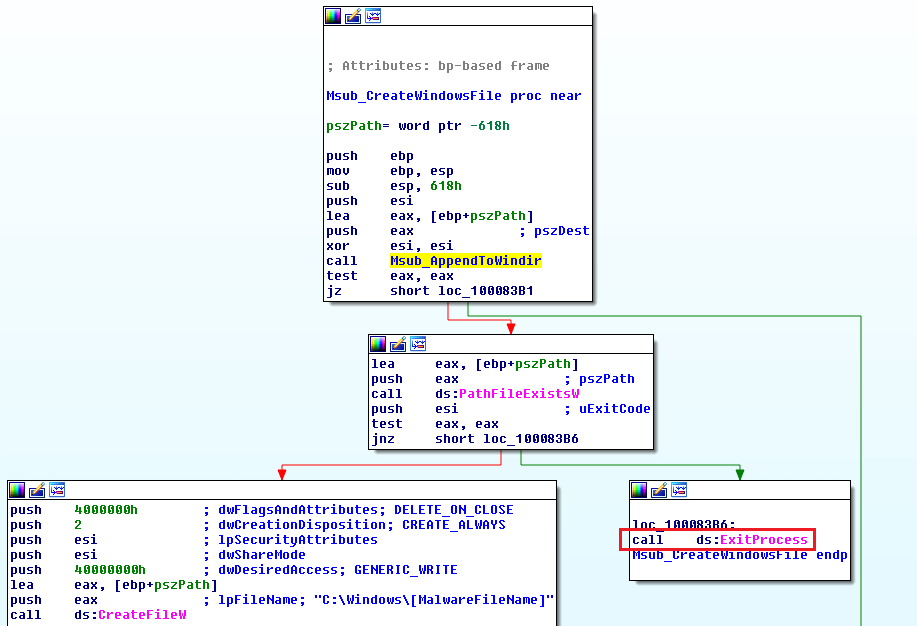 In order to force the malware to call ExitProcess, we need to find the name of the file it is checking for. Looking again at the code, we see that the file name is stored in a memory location called pszPath. 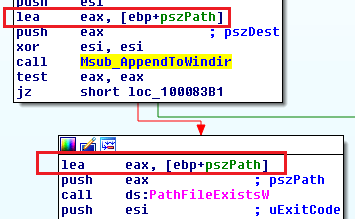 Figure 6. Path to be checked.

To see what is stored in this memory location, we need to enter into the function that we have called Msub_AppendToWindir.

Figure 7. Inside the Msub_AppendToWindir function.

In the screenshot above, the full path and filename of the DLL that we have used in our tests is C:\_Virus\Petya.dll, which was returned in the code shown previously in Figure 3. Let’s walk through the code shown above in Figure 7:

It then exits the function. Looking back at Figure 5, we now know what is being checked in the call to PathFileExistsW. In our example, it would be C:\Windows\Petya. If this file exists, the malware then goes to the call to ExitProcess.

This is not a straightforward killswitch like in WannaCry, since the filename that an intended victim receives may change.

As this is an ongoing analysis of a new, active threat, FortiGuard Labs will continue to update this blog as more information becomes available.

In addition, Fortinet’s WannaCry IPS rules appear to protect against exploits targeting these vulnerabilities. Fortinet teams are verifying this claim.