A Closer Look at Locky Ransomware

A new ransomware named “Locky” is currently circulating in the wild and making the headlines. There are some good reports regarding Locky ransomware already available over the Internet. This blog intends to focus on some technical areas that (we believe) have not been covered yet, namely, its domain generation algorithm, command and control communication, and file encryption.

For reference, the following is a screenshot of Locky’s Decrypter page (cropped to save space):

Based on Harry71’s Onion Spider, the Locky decryptor page became available on February 6, 2016 which may indicate the start of Locky’s operation:

Before proceeding with its DGA, Locky ransomware calls RDTSC function to get a timestamp counter. It then implements modulo computation based on the RDTSC result. If the result is less than six, it will trigger DGA. Otherwise, it will directly connect to a hardcoded IP address:

The following shows the DGA algorithm of the malware. The domains are generated based on the affected machine’s year, month, day as well as some hardcoded seed values: 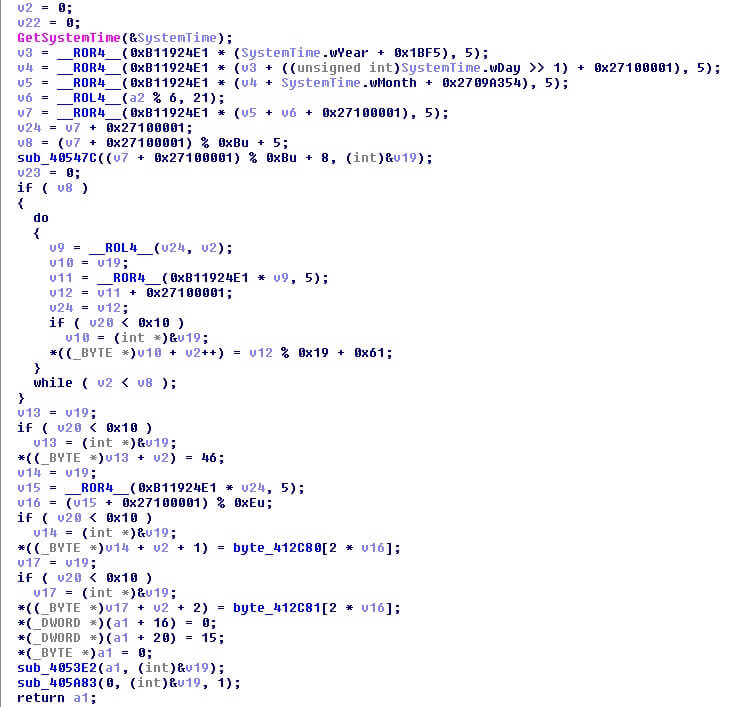 The initial phone home to the C&C is in the following format:

All outbound requests of the malware to its C&C server are encrypted using the following algorithm with specific hardcoded keys (highlighted):

Similarly, all inbound data (C&C replies) are decrypted by the malware with specific algorithm and keys:

The C&C currently accepts the following requests from the malware under the “&act=” parameter:

The following are sample malware-C&C communication before encryption.

The following is a sample decrypted response from the C&C containing the public RSA key:

It can be seen above that the delimiter for each affected file name is backslash (0x5c).

The ransomware is capable of serving ransomware notes in different languages. Upon spoofing the “⟨” parameter with “fr”, for instance, we received the following response which is now in French language:

Finally as a supplement to what is already reported on the Internet, it encrypts files located at fixed, removable and RAM disk drive types:

Based on our findings above, we believe that the actors behind Locky are experienced cybercriminals. The way the ransomware is designed resembles prominent ransomware families as demonstrated by its DGA capabilities and elaborate C&C reporting.

We also predict that Locky ransomware will be a major player in the ransomware scene. Fortinet will continue to monitor developments regarding this malware.