[Editor's Note: If you haven't yet watched the season finale of Mr. Robot, there are some spoilers here. It's not a recap and it won't ruin the whole episode, but you might want to watch it first before you keep reading.]

Within the first four minutes of last night's Mr. Robot finale (postponed from last week because of sensitivity to the on-air shooting in Virginia), we saw a character who's life had been destroyed by the Ashley Madison data dump and heard how astoundingly difficult it is to prosecute computer abuse and fraud without a great deal of evidence (been there and done that and it's true). Moments later, the ripple effects of the recent downturn in the Chinese stock and currency markets hit home. This is why the show has always and continues to work so well. Even as we go further down Elliot's rabbit hole and realize how disturbed he really is, even as the show becomes more about his psychodrama and less about the geeky action that drew us in in the first place, Mr. Robot still masterfully combines the realities of our vulnerability in a very connected world with just enough hyperbole and caricature to let us know we're still watching TV. 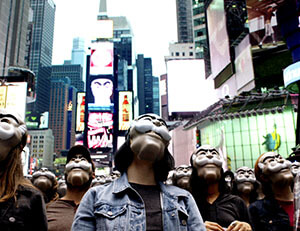 Mr. Robot taps into the pervasiveness of cybercrime, our insecurities about our own digital footprints, and the naiveté of the average citizen about security and privacy. Add in a healthy dose of concern and skepticsm about the influence of massive corporations and the general sense of resignation to a lack of control and privacy and you have a show that hits a few raw nerves with every episode.

It helps that it hooks so nicely into the tech subculture...Not just hacker culture but the sort of stuff we live and breathe everyday. And then, of course, it kicks it up a few notches to give us a dystopian glimpse of what could be.

Interestingly, one of the first questions my son asked after he got hooked on the show a few weeks ago and started catching up on episodes was "Is E Corp basically like Google?" I responded, with my tongue firmly in cheek, that they couldn't be since their corporate motto was "Don't be evil." Clearly can't be "Evil Corp" then, can they? Don't get me wrong - I'm pretty deeply invested in the Google ecosystem. I often joke that Google knows more about me than my wife. I'm hardly one of the anti-Google crowd and I know what I'm trading for information-driven convenience. But it does make you wonder: What happens if some group actually hacks Google in a big way? We've already seen disturbing fallout just from the Ashley Madison debacle. If Google's reach is such that they could theoretically throw a presidential election, what would the consequences of a truly massive hack on the search giant look like?

Mr. Robot channels legitimate concerns about the scale and reach of global conglomerates, the "too big to fails", and ubiquitous organizations like Google. As Elliot asks himself, "Malware that took Darlene all of 2 hours to code - is that really all it takes to kill the world?" Probably not, but it's hard not to feel vulnerable when so much of what we do is tied to powerful services and corporations.

Bottom line - Mr. Robot is about a lot of things - hackers, greed, corruption, even mental health...but at the end of the day it begs the question how much damage could a savvy hacker with questionable motives and concerning mental health actually do? The answer, of course, is quite a bit. Perhaps not take down global financial markets on a massive scale...perhaps. We hope. Much as I'd like my credit cards to suddenly have $0 balances, the banking system as we know it is fairly useful. Things aren't quite as centralized as in the world of Mr. Robot and the organizations we already consider too big to fail are dwarfed by the fictional E Corp. But Mr. Robot continues to work because it isn't that farfetched - it isn't that outlandish. Fictionalized, yes, but conceivable not so far into our future. Conceivable enough, at least, to make us uncomfortable. As Darlene says, "First banking, then infrastructure...we've been through this," as she visualizes the fallout from their massive hack.

Maybe it won't be a small hacktivist group like fsociety. Maybe it will be a nation-state. We know that nations are already cross-referencing large government breaches like the OPM hack with the Ashley Madison data dump to potentially target US operatives. The sky, unfortunately, is the limit, as cybercrime meets big data. But that's a blog for another day.

For today, if you haven't already watched the season finale of Mr. Robot, you should. And keep watching after the credits, since the bonus scene is a lovely mix of scary, prescient, and brilliant.

A Tale of Shifu and its Attempt to Bypass FortiSandbox

So You Want to Be a (Ethical) Hacker?