Smart cities are being planned the world over. Technology development always goes through two phases for any new discipline: First – tools are developed, and infrastructure is built and enabled. And second – the technology is scaled up. In the case of smart cities, we are in the first phase, where many of the kinks and challenges are still being ironed out.

Here are some examples of services a smart city might provide:

To enable such services, smart cities will need to deploy plenty of IoT devices and services for metering, sensing, and controlling.

The Attack Surface of Smart Cities

As was seen recently in a series of IoT-based denial of service attacks, IoT devices can be compromised and hijacked into a Shadownet (an IoT-based botnet that can’t be seen or tracked using normal browsers or tools) and controlled by a command and control (C&C) center run by hackers. Alternatively, these devices and services may be attacked in order to deny services to legitimate users.

Here are some examples of what hackers and attackers can do:

Increasing the Security in Smart Cities from the Inside

While it’s not possible to secure every possible security breach in a totally connected environment, it doesn’t mean we need to go back to the Stone Age. Instead, it’s possible to take some key initial steps to strengthen the smart city’s security posture and architecture:

Segmentation is the Key

With a complex smart city network, segmentation is the key. For example, the Smart Transportation network needs to be logically segmented from other smart networks, such as user services, websites, or energy networks, etc. This aids in isolating an attacks, and allows for the advanced detection of data and threats as attacks and malware move from one network zone to the other. This also divides the smart city network into security zones, which aids in compliance, monitoring internal traffic and devices, and preventing unauthorized access to restricted data and resources.

As discussed in my earlier blog, such segmentation will ensure that the majority of the IoT components deployed across the smart city only communicate with those devices and systems they should, and only talk in the protocols they have been assigned. This will also ensure that the interior network doesn’t get hacked and can’t participate in a DDoS attack. 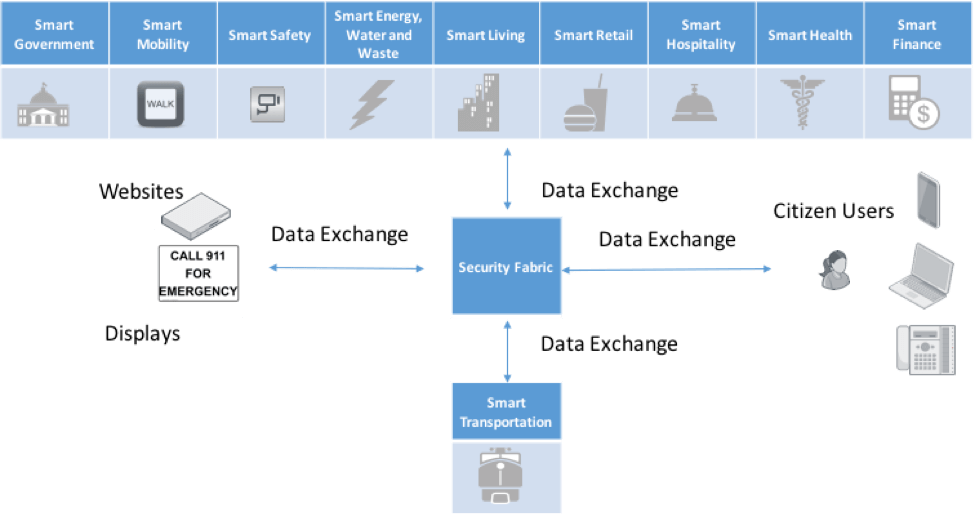 In a similar way, other smart networks in the city can be segmented and isolated from each other, thereby avoiding the spread of malware and reducing the impact of any hacks and attacks. Further, smart cities must make include the ability of IoT equipment to support and control such traffic an essential purchasing requirement.

Increasing the Security in Smart Cities from the Outside: DDoS Attacks

While network segmentation will ensure that the internal network is protected and its integrity and availability are preserved, we need to increase the availability of the smart city’s Internet facing properties. DDoS attacks can be easily used to overwhelm this infrastructure. Depending on the size of the pipe, and expected worst-case scenarios, city IT teams must develop and implement and effective DDoS attack mitigation strategy. This may be comprised of either an overprovisioned appliance solution, or a hybrid solution consisting of appliances combined with a cloud based scrubbing center.

An overprovisioned appliance solution enables you to manage DDoS attacks that are larger than your normal bandwidth usage. For example, if your normal user traffic is 1 Gbps, develop a plan for a 20 Gbps DDoS attack that includes deploying an appliance to mitigate such attacks, and provision for such potential bandwidth requirements from your service provider. If the actual attack is expected to be larger than your service provider bandwidth, however, you may need a hybrid solution that includes a cloud-based scrubber that works closely with your DDoS appliance solution.

From Smart to Smarter

As time passes, smart cities will become even smarter as they learn from researchers, from each other, and from incidents that are bound to happen.