For years now, we’ve been hearing about “smart cities.” Cities with the ability to leverage innovative technology, and automation to optimize resources and improve services for their citizens, with the ultimate goal of making our lives better. These smart cities are no longer a distant dream of the future – they are happening now. Unfortunately, without sufficient cybersecurity, their ultra-connected nature can make these dream cities a nightmare, as the recent hack of San Francisco’s Municipal Transportation Agency showed. 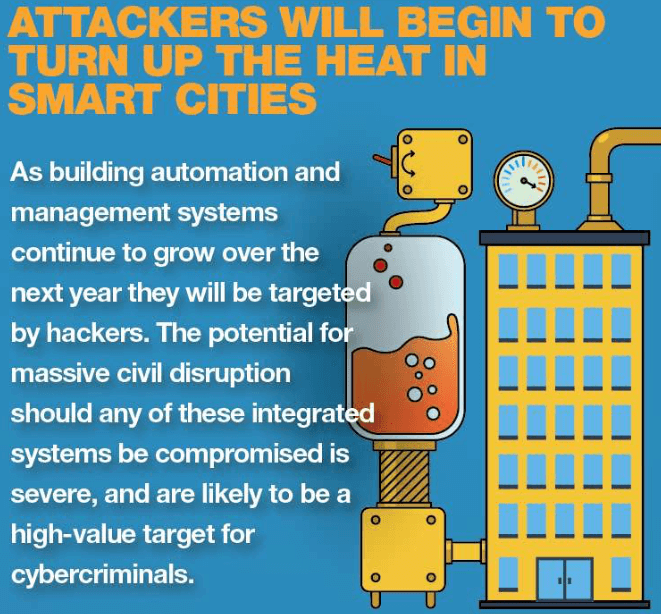 Most cities around the world have implemented at least some smart solutions, integrating information and communication technology (ICT) and Internet of Things (IoT) tools like smart sensors to enhance the delivery of urban services, reduce costs, conserve resources, and improve the quality of life for its citizens.

Traffic control is an area where smart technology is making a big impact. Sensors detect traffic volume and adjust lights and signals to improve traffic flow. Public transportation is using it as well. Riders receive real-time data on when their bus or train will arrive, news on delays, and in many cases can even use their smartphone to pay for their ride. Advanced parking guidance systems can guide cars directly to open parking spaces. Besides convenience, this has the added benefit of helping reduce emissions and wasted gas. And  street lights can turn on and off based on motion, and can adapt to weather conditions such as an overcast day to provide lighting when and where it is needed.

On the utilities side, smart power grid technology is allowing cities to reduce electricity waste and energy costs. Smart water management includes pipes that can monitor water quality and report leaks. Smart waste management systems have sensors that allow garbage containers to report how full they are, and when they need to be emptied. This allows for targeted waste collection (only having garbage trucks travel to containers that need to be emptied,), which saves time, money, and fuel.

While all this convenience and efficiency is great, it comes with a price. The more smart technology a city deploys, the larger an attack surface they create for cybercriminals, and the more difficult it becomes to manage from a security perspective. Imagine if someone was able to hijack a city’s traffic control systems, paralyze public transportation, or take over a city’s power supply. Whether a hacker’s motivation is money or terrorism, opportunities abound in smart cities.

Smart is Not Always Secure

When people think about smart cities, many assume that this advanced technology must be very difficult for a hacker to get into, but that is often not the case. Cybersecurity is frequently overlooked when these smart city initiatives are developed and deployed.

The story is familiar in the growing world of IoT. The makers of these smart devices are focused on ease of use and ease of deployment, with security often only an afterthought. In addition, the agency or organization deploying the smart technology often doesn’t have a security department that's focused on hardening these devices, which makes them even more vulnerable. Another challenge is that a lot of those sensors leverage wireless technology. Because they're not hard-wired, and their traffic is often not encrypted, it is easier for attackers to gain access to their signals.

Even though smart technology sensors distributed around a city present a lot of non-traditional entry points for new attacks, a lot of smart city data breaches and system compromises still happen in traditional, familiar ways. For example, someone picks up a virus on a computer that is linked to all these interconnected devices and systems, infecting the entire system. In the case of ransomware, phishing emails remain the leading attack vector. In most cases, once malware has made its way inside an organization’s network, there is usually nothing to stop it from spreading and putting other servers, agencies and all your data at risk.

When planning to implement smart technology, cybersecurity must be considered from the beginning. That starts with a thorough cybersecurity review to determine vulnerabilities. The next step is to educate employees on cybersecurity best practices and protocols, including how to avoid malware and what a compromise looks like. You also need to have an emergency response plan as part of your cybersecurity strategy, and all employees need to know their roles in the event of a breach or attack.

It is important to create a Computer Emergency Response Team (CERT) or teams to monitor and audit the city’s cybersecurity preparedness. In addition to leading the response to breaches, they can lead the communication and information sharing between city agencies. Coordinating communication and response within a single entity is difficult enough. Getting different agencies and departments within a city working together can be nearly impossible without a dedicated team in charge and a centralized mandate from city leaders.

From a network security architecture standpoint, as cities move more into the world of smart technology and smart systems, they need to be aware that IoT flattens your attack plane, making everything accessible and suspect. To address that, you need cybersecurity solutions that include next-generation firewalls, internal segmentation firewalls, and advanced threat protection, and integrated in a way that ties it all together, from endpoint smart sensors all the way through to your servers and systems – even those in the cloud.

Internal segmentation of your network is crucial. While you should always put up the strongest external firewalls you can to guard against cyber attacks, you should also assume that, like all security, those walls will be breached. Which is why you also need to implement an internal segmentation firewall that enables you to identify and contain any malicious code that makes it past your external defenses, thereby isolating a breach and limiting the damage.

Combined with advanced threat protection (ATP) technology, including sandboxing, you can be constantly scanning all the servers on your network, proactively looking for advanced threats that might've slipped through. Tying everything together allows you to always see what is going on across your network, giving you the ability to respond immediately to an event, and limiting the damage of a breach or attack.

The nature of smart technology is such that the “smarter” a city is, the more vulnerable it is to cyberattacks and security breaches, both intentional and unintentional. Attacks on a city’s infrastructure are becoming more frequent and could have devastating effects, so it is critical that we take the steps now to secure our cities. A well thought-out cybersecurity plan and protocols, combined with an integrated security solution that provides visibility across your entire network, is the best approach to keep up with increasingly sophisticated and intelligent cyberattacks, and keep your city safe.