It is undeniable that the responsibilities of a CISO are quickly evolving and expanding (see “The CISO Ascends from Technologist to Strategic Business Enabler,” Understanding the Cybersecurity Skills Shortage: An Analysis of Employer and Jobseeker Skills and Occupational Demographics Report Series, Fortinet). Digital initiatives that expand the boundaries of the network edge, paired with the demands from the board of directors for protecting critical data now require a CISO with both executive and technology expertise. However, the most simplified version of a CISOs biggest priority can be stated as such: secure the organization’s growing attack surface with limited budget and resources.

How does a CISO allocate limited resources to protect an evolving attack surface and meet the needs of the board? This is a question that Forbes Insights explores in a new report that was published in association with Fortinet: “Making Tough Choices: How CISOs Manage Escalating Threats And Limited Resources.” Specifically, the report takes a deep dive into the decision-making processes of leading CISOs to determine how they secure their networks from an array of advanced threats with resource constraints. 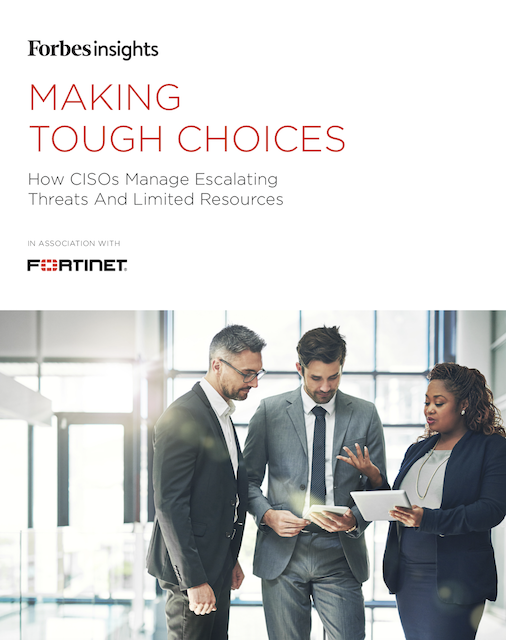 Key Findings and Takeaways for CISOs

The report determined five top findings from the surveyed CISOs, ranging from concerns of the future of evolving threats, key priorities and goals, security concerns, and an ideal security posture scenario:

Perception of the Evolving Threat Landscape

Considering the recent rapid adoption of digital transformation (DX) initiatives that unintentionally expand the attack surface coupled with the growing threat landscape, it comes as no surprise that the majority of CISOs represented in this study say that they anticipate an increase of cyberattacks in the near future. The study revealed that the top threat concerns for CISOs consist of malware (17%), Internet-of-Things attacks (14%), and phishing attacks (12%).

In other words, these findings demonstrate that CISOs are primarily concerned about known threats, and may lack the ability to take a proactive approach to finding and remediating zero-day unknown attacks.

With malware variants increasing dramatically—129%—and upwards of 40% of malware on any given day being unknown, this lack of attention to zero-day/unknown attacks should signal blaring warning sirens.

Limited resources result in CISOs making decisions based on necessity, leaving them to compromise and forego more proactive, visionary security measures. According to the Forbes Insights report, there are three main factors that limit CISOs from implementing an end-to-end security infrastructure:

Steps to a Proactive Security Strategy

Despite the number of constraints CISOs face when protecting their organizations, there are a series of actionable steps they can implement throughout their teams to ensure they allocate spending in the right areas and manage their teams for maximum outcomes:

CISOs Should Get Involved Early and Throughout WAN Edge Transformation

Taking a Priority-Based Approach to Cybersecurity