On December 7, 2017 Fortinet officially broke ground on our new threat intelligence and research and development campus located next to our existing facilities in Burnaby, British Columbia, Canada.

This new research center reinforces Fortinet’s continued commitment to the Metro Vancouver area. We have operated in Burnaby since the year 2000, and consistently contributed to the growth of Canada’s technology sector. These new facilities will eventually house 1,000 new technology jobs required to staff our state-of-the-art data center, which in turn will support and enhance our FortiGuard Threat Intelligence and R&D centers located around the world.

Fortinet is honored to have earned British Columbia’s Top Employers of the Year award for the last three years, which has helped us attract and develop highly skilled cybersecurity experts, technology developers, engineers and other professionals in the province. We are proud of the fact that many of Fortinet’s top talent grew up in the province, graduating from Canadian educational institutions such as the British Columbia Institute of Technology and Simon Fraser University. 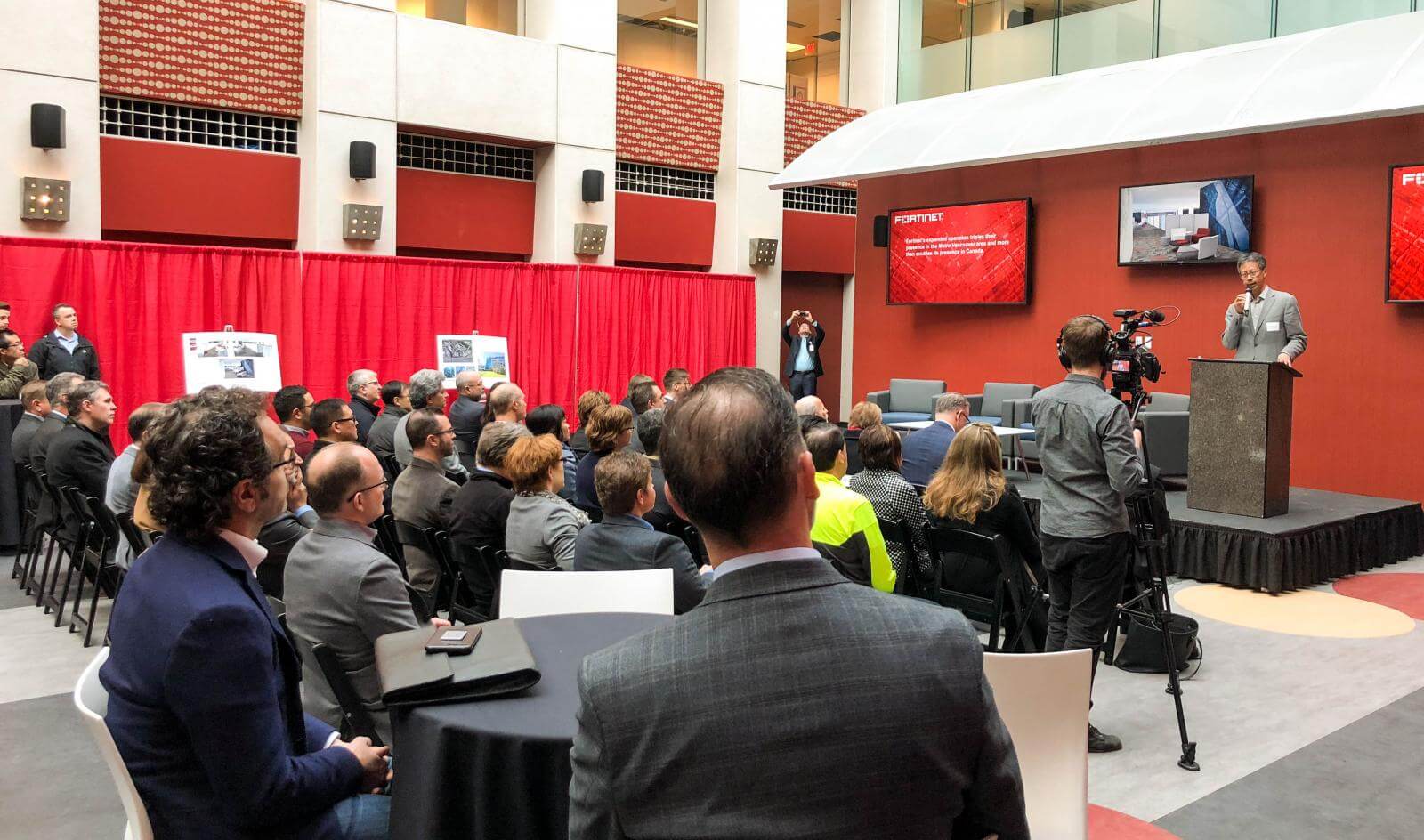 Fortinet’s relationship with Canada, however, goes beyond simply economic benefits. Our Security Fabric solutions have been chosen to protect organizations such as the Government of Canada, and are used to secure Canadian businesses across healthcare, retail, shipping, and other segments critical to the success and well being of British Columbia and across the country.

Michael Xie began his remarks by speaking about Fortinet’s long history in, and commitment to the Vancouver area. One crucial factor that led to originally building in the area was the number and quality of talent in Vancouver and British Columbia, which is a direct result of the strong technical education and university system in the area. Canada and her local governments have also been incredibly welcoming to the high-tech industry, playing a huge role in the rapidly expanding tech sector Vancouver has today.

Fortinet was one of the first companies to operate a data center in the area, and we received amazing support from the local representatives and city council, as well as through things like proactive immigration policies and incentives for R&D investments. Our partnership with the government has been a huge factor in our continued development and investments in the area.

Fortinet began in Vancouver in 2000 with a small team of 10-15 engineers who began by custom building a handful of servers and then engineering the tools needed to process threat data. Over the next nine years, we organically grew our people, processes, and technologies, while also opening threat intelligence labs in Europe and Asia. By 2009 we had grown our staff to nearly 100 full-time threat researchers, and expanded our threat intelligence technologies, enabling us to be one of the first vendors able to detect new threats hiding within the content of data and applications.

As these new cyberthreats began to grow in size and sophistication, it quickly became apparent that we would need to massively scale our operations to stay ahead of the automated cyberattacks we could see on the horizon. So once we launched our IPO at the end of 2009, we used that funding to hyperscale our threat intelligence efforts, expanding the hub of our advanced threat intelligence and R&D in Burnaby.

Today the people and infrastructure we originally founded in the Vancouver area has evolved into FortiGuard Labs – now the largest and most advanced cyber threat intelligence program in the world. We process global threat data from more than 3.4 million devices and protect more than 330,000 customers every minute of every day.

But it’s just the start.

We’re now working on further evolving our Artificial Intelligence and Machine Learning technologies, coupled with a state-of-the-art artificial neural network of computing systems comprised of billions of interconnected nodes. As a result, we are now well on our way towards our ultimate goal of being the first security vendor to develop and deliver the next-generation of Intent-Based Network Security.

Of course, this requires both technology and manpower. Which is why we are painfully aware of the global shortage of skilled cybersecurity professionals. This makes British Columbia an ideal location for our expansion, as the area has consistently provided the talent that underpins our innovation. But the gap in global cybersecurity skills is predicted to increase.

That’s why we’re also doing our part by partnering with public, private and educational organizations across the globe, and developing cybersecurity training programs like our Network Security Academy and Network Security Expert programs. These web-based and hands-on programs have already helped to engage and develop tens of thousands of individuals. As trained and certified professionals, these men and women will form the foundation of the next generation of cybersecurity talent.

Highlights from the Event

In addition to Michael Xie’s comments, our other esteemed participants provided valuable insights into their commitment to this technology sector and their ongoing partnerships with Fortinet to meet cybersecurity demands well into the future.

Minister Ralston, gave a keynote presentation about the importance of cybersecurity in the province and the actions that the government of British Columbia has taken to ensure the continued expansion of the tech sector. He also reinforced the importance of continued cooperation between the government, industry, and education to help address the cybersecurity skills gap and continue to develop the pool of skilled candidates that has made Vancouver an attractive location for technology companies.

The experts panel on the topic of closing the cybersecurity skills gap reinforced Minister Ralston’s comments and provided a cross-industry perspective on the opportunities and actions being taken to help foster the next generation of cybersecurity and technology talent. Representing leading institutions of higher education, the tech industry, and the city of Vancouver, the panelists discussed topics ranging from curriculum development and experiential learning, to economic incentives and immigration policy.

Join Fortinet at the 2017 Internet2 Global Summit: Industry Experts Will Examine the Importance of Cybersecurity in Higher Education.